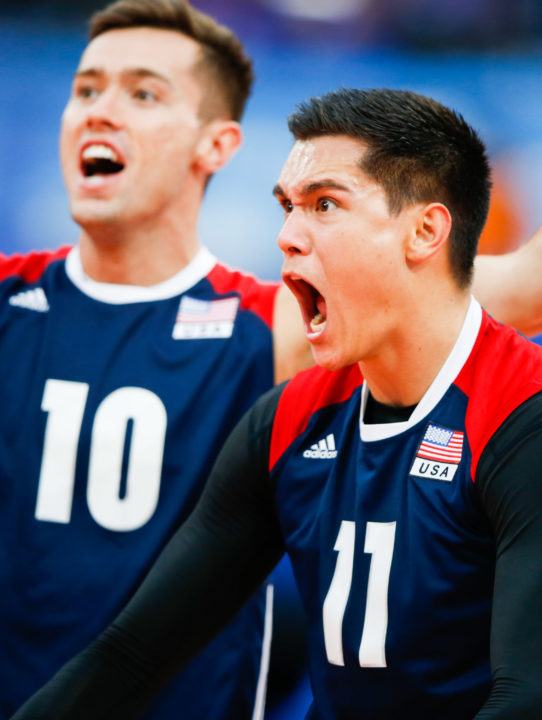 Micah Christenson has been a rock at setter for the United States throughout the tournament. Current

The bronze medal match for the 2017 FIVB World League (watch live here) is about to begin, and starting lineups have been announced.

The Americans early were a story of tinkering with their lineups. Ben Patch, who has wound up being one of the team’s offensive forces, didn’t even play the first game of the tournament – and is now crucial to the team’s success.

But over the last several matches, the roster has stabilized (though even Thomas Jaeschke, one of the most-pedigreed Americans on the roster, didn’t start the last two sets of the semi-finals).

The big change for the United States in the bronze medal match is that Daniel McDonnel is starting in place of Jeff Jendryk at middle blocker. Jendryk has been a breath of fresh air for the U.S. here, but he was subbed out for McDonnel in the 3rd set against Brazil, and McDonnel finished the day. USA Volleyball said they had no information about a Jendryk injury, but McDonnel is much more of an offensive force than is Jendryk. With Canada not being a big service team, McDonnel’s offensive abilities will be more crucial to side-out Canada’s serves as frequently as possible.

McDonnel also started in the teams’ first matchup this year and pllayed the first two sets, while Jendryk came in and played sets 3-5. Canada won 3-2, but the teams split 1-1 in the sets that McDonnel played in.

A look at Canada’s roster shows the stability that has carried him this far – it’s identical to the one they used in the semi-finals.