Turkey and Azerbaijan on to Semis. EuroVolley QFs Recap (Highlights) 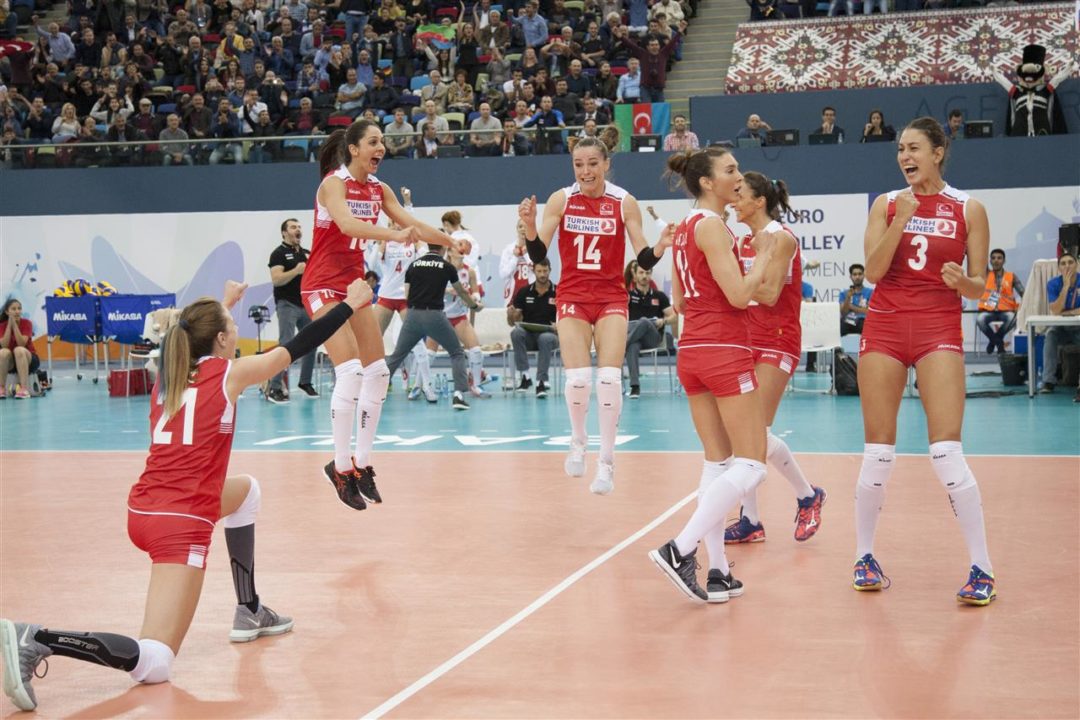 Today saw one of the biggest upsets in the tournament so far as Turkey had almost no trouble at all eliminating Russia from the competition. Consider that Russia dominated Pool C during group play, finishing at the top spot with 3 wins, including a 3-1 beatdown of Turkey itself, and got eliminated by a team that almost didn’t make it to quarterfinals.

However, some people would say that the Russians had it coming, as its squad, having fired its coach just hours before the competition, wasn’t playing convincingly well enough, and Turkey, albeit its very slow start, was getting up to form as each game passed by. Regardless, the Turkish squad has nothing to do with the Russian coaching woes, and will now move on to the quarterfinals where they will meet Serbia in an epic clash.

Meanwhile, hosts and tournament sensation Azerbaijan completely bulldozed over Germany in a very one sided match, with Polina Rahimova playing the best volleyball of her life. The Azeri have played four games thus far in the competition, having dropped only one set. Their next stop, the semis, will be their toughest challenge yet, as they will go against title favorites Netherlands.

Azerbaijan’s winning streak at the 2017 women’s EuroVolley continued on Friday afternoon as the hosts beat Germany 3-0 (25-20, 25-18, 25-21) to claim a spot in the semis – the first time they achieve such a feat since their debut in the competition back in 2005. Azerbaijan had dropped only one set in the pool stage of the tournament – to Germany – and despite yet another slow start, they once again had the upper hand in their second clash with a young German side to be a step away from what would be their first, historic #EuroVolleyW medal. On Saturday, Azerbaijan will open the programme of the semis playing 2015 silver medallists The Netherlands in what promises to be a truly exciting game – in a repeat from the World Championship qualifier played back in June, which Azerbaijan won 3-0.

The pressure was obviously mostly on Azerbaijan – with the hosts of this year’s EuroVolley vying for their first appearance in a European Championship semi-final since 2005 while playing under the eyes of the President of the Republic of Azerbaijan, Mr Ilham Aliyev and First Lady, Mrs Mehriban Aliyeva. Germany used this factor to their advantage to fly to a 4-0 lead in the first set, with Azerbaijan somehow continuing their trend of having a rough start to each of their matches. After a time-out, Azerbaijan stopped their negative streak but still trailed 5-8 at the first technical break. Germany displayed a very solid and composed performance (11-7) in their effort to cause a sensation before Azerbaijan levelled the score at 13-13 and eventually edged ahead shortly afterwards with the help of their superstar Polina Rahimova. The home side claimed a small edge and were able to hold on to it – with the set eventually ending on an ace by Rahimova (25-20).

Germany looked determined to put up a fight – and they did so from the early stages of the second set closing in as soon as Azerbaijan claimed a small advantage. However, an ace by Natalya Mammadova propelled the hosts to a 14-10 lead and their well-oiled machine worked just fine as Azerbaijan cruised to a comfortable 25-18 win to double their lead in the match on yet another point scored by Rahimova.

The same trend continued in the third set with Azerbaijan putting a lot of pressure on Germany’s receivers with their powerful serve – and it soon looked like Maren Fromm & Co. were not going to be able to spoil the home side’s party (7-3). Germany’s top scorer in the tournament, opposite hitter Louisa Lippmann did her best to try to lift her team up and rise to the occasion but Azerbaijan’s power was just too much to stand (19-12). Even though Germany surged back to reduce their deficit to four points (22-18), it was only a matter of time until Azerbaijan sealed their 3-0 victory and with it claimed a spot in the #EuroVolleyW semis for the second time in history.

“Our goal was to fight until the end. We did this throughout this whole European Championship and we wanted to do this today as well. The problem was just that we made too many mistakes to cause them any trouble. I think this was a great experience for our younger players to grow on the way to the next European Championship, where we are going to play. We gave it our best every time, the game against Bulgaria was a great success for us and we achieved our minimum goal, which was to qualify for the next edition of EuroVolley.” Maren Fromm, team captain of Germany

“In the first set Azerbaijan showed that you can win with one player in Volleyball, because Polina Rahimova scored all alone. I think she is the best spiker in the world at the moment. My team played and fought well, but if Rahimova has a day like this, no one can stop her. It was hard for us, since they played with great team spirit, at home. My team tried and fought but they do not have even a half of Azerbaijan’s experience. I saw this team already in 2007, with Rahimova and Mammadova at the European Championship, while for 8-9 players on my team this is the first championship ever, so it’s totally different for them.” Felix Koslowski, head coach of Germany

“We won 3-0 but it was a difficult match. Germany played really well at this European Championship and we prepared very seriously and thoroughly for this match. We beat Germany for the second time at this tournament and we have secured our first European Championship semi-final since 2005. This is a historic moment for Azerbaijan and the team will now fight for a medal.” Famil Aghayev, assistant coach of Azerbaijan

“We made many mistakes of the beginning of the first set. However, after this rough start, we calmed down and showed our best Volleyball. Azerbaijan needed a victory to be able to fulfil our dream – which is to win a medal at this European Championship. Tomorrow we will play against The Netherlands in the semis. The opponent we will face is a very strong one but our team will try to beat the Oranjes.” Natalya Mammadova, outside hitter of Azerbaijan

“After 12 years we have made it again to a European Championship semi-final. It such an emotion! After celebrating a victory against Germany, we can start thinking about the medals. This quarterfinal was very difficult, Germany showed good Volleyball but they could not stop us in the end.” Valeriya Mammadova, libero of Azerbaijan

Turkey dethroned reigning European champions Russia as they delivered a startling performance – by far their best in the tournament – to progress to the 2017 women’s EuroVolley semi-finals and play 2015 bronze medal winners Serbia for a spot in the ‘grand finale’. After a rough start to the tournament, losing to Russia and Bulgaria in their pool, Turkey finally found their best game and will be vying later this weekend for their third #EuroVolleyW medal in history after taking silver in 2003 on home soil and bronze in 2011 in Belgrade. Even though they put up a fight, Russia did almost not stand a chance in the second and third sets – with Turkey’s show producing a compelling 3-0 victory (27-25, 25-18, 25-20) over the 2013 and 2015 gold medallists.

Turkey enjoyed the loud support of quite many fans in their effort to reverse the result of their previous matchup with Russia in Pool C (1-3) and they were off to a promising start before Russia clawed back and edged ahead at 19-17 on a couple of mistakes by the players in red shirts. The audience was almost equally divided between pro-Russian and Turkish supporters – and much to the disappointment of the latter ones, Turkey failed to cash their first set point before Naz Aydemir secured a second one and it was at their third attempt where they were successful – thus securing a first edge in the match (27-25).

Many had anticipated this would be a close game – and so it was, even though Turkey stormed to a 16-10 lead in the second set as they delivered their most consistent performance in the tournament so far. Meryem Boz continued her show from the Playoff matchup with Poland and Turkey as a whole looked reinvigorated compared to their previous showings. With Turkey three points away from doubling their lead in the match, Russia coach Konstantin Ushakov stopped the game but to no avail – as the ‘Sultans of the Net’ secured a 2-0 advantage over the reigning European champions after a Russian mistake in defence (25-18).

At this stage, Russia were with their back against the wall – and could only hit back if they wanted to defend the continental crown they had claimed in 2013 and 2015 as well. The multiple European champions had changed almost their entire starting six with the only exception being Nataliya Goncharova but Turkey were flying on the wings of enthusiasm as they powered to a 17-12 lead in the third set. The sensation seemed about to materialise as Turkey scored point after point with Gözde Kirdar and Boz on fire – and their fans did not have to wait too long to start the party as Boz stopped Voronkova to seal a 3-0 win.

“It’s an amazing result because we respect Russia a lot. They are a great team. Today we served very well and we did very well in block and defence and did not make too many unforced errors. We won 3-0 and are very happy but now we have to face Serbia, so we have to quickly forget this victory and focus on the next match.” Eda Dündar, team captain of Turkey:

“I am incredibly thankful to this team. We were probably not playing amazing Volleyball – but we played the best match of the tournament. When you have a team that plays the best match of the tournament in the quarterfinals, then you have to be thankful to your team. I am extremely proud and happy, they did a great thing but we do not have too many hours to think of anything other than Serbia, so now our focus is there.” Giovanni Guidetti, head coach of Turkey:

“I do not have any words and there is nothing I can say about this match.” Konstantin Ushakov, head coach of Russia: