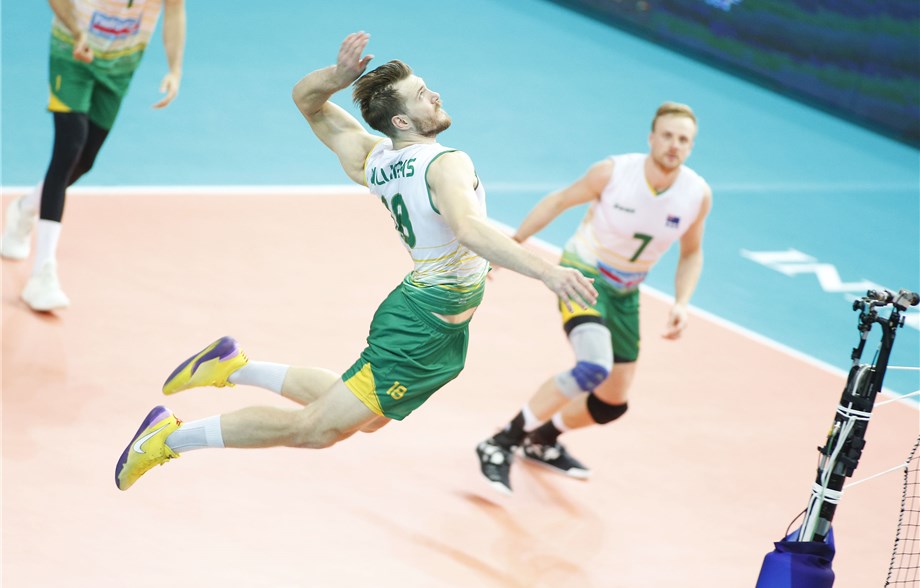 Australia followed Lincoln Williams to its first victory of the World Championships. A well-rested Russian team blazed through Tunisia, including a record-setting 25-6 second stanza. Current Photo via FIVB

The Volleyroos were aiming for their first win, while Cameroon looked to get its second to climb into the upper half of the pool. In the end, Australia followed Lincoln Williams to victory.

Russia meanwhile was well rested coming into its battle with overmatched Tunisia, blazing through Tunisia, including a record-setting second stanza.

“This is an important victory for us in order to advance to the second round,” Australian coach Mark Lebedew said. “We caught a nervous start in the first set with Cameroon showing a good game, but we managed to come back and lead in the best way we could.  We have a great team, very skilled and efficient in all aspects of the game. I can rely on all of my players. Yesterday we played a good match as we did today, regardless of the lineup on the court in this clash. We are very self-confident, and we are not afraid of any opponent. We are ready to face all the teams in the next matchups in this pool and hopefully in the next round as well.”

After making the switch to Lincoln Williams, Paul Sanderson and Max Staples midway through its match with the United States, Australia opted to go with the trio among the starting lineup vs. Cameroon.

Williams came through with a match-high 22 points (21 kills, 1 ace), while Staples added 11 points, all on kills, and Sanderson added two putaways. The six had help from just one substitute as Paul Carroll came in briefly in Sets 2 and 3.

Joining Williams and Staples in double-digit scoring was Beau Graham, who chipped in seven putaways, a team-high four blocks and an ace for 12 points. Nehemiah Mote also was key at the net with three stuffs.

Cameroon built a 13-9 lead in Set 1 and went on to a 25-21 win. Australia followed Williams’ lead to three straight victories.

“We managed to stun Tunisia with a straight three-set win but  we still have to face strong teams like the United States, who will be our opponents tomorrow,” Russian opposite Maxim Mikhailov said. “This match allowed our team to claim some more points in the race for the top spot in the pool while playing on a court we are still not that familiar with as we only had one training session here. We won the Volleyball Nations League earlier this season, but it was a challenging and hard tournament. Now we need to reset while being focused on what is to come next in this championship.”

Russia had help from 23 Tunisian miscues in the win and committed just 10 in the match, but also led the way in the rest of the statistical categories. The Russians used a 37-29 lead in kills, 10-4 edge in blocks and five aces (to 1) to nearly double its opponents’ tally.

The Russians set the record for the lowest points allowed in a set in a World Championship match in the rally scoring era, ahead of the USA’s 25-8 mark against Puerto Rico in 2014. Russia kicked off the stanza with an 8-1 run and led 16-3 at the technical timeout on the way to the rout.

Mikhailov (11) and Egor Kliuka (10) were the top scorers for the Russians, while Artem Volvich, Dmitry Volkov and Ilyas Kurkaev added seven apiece. Kliuka was tops offensively with nine kills, while Mikhaylov added seven putaways on a .700 hitting effort and added two blocks and a team-best two aces. Volvich led the way at the net with three blocks. All 14 players saw the court for Russia with substitutions coming out in force in the final two sets.

“It is very simple to analyze today’s match,” Tunisia coach Antonio Giacobbe said. “Russia have the right assets, as they showed in the second set, when their great block and defense skills combined with our lack of strength in attack made the difference. Their service was less strong than usual and we made some mistakes in attack. In the following set, we showed a better individual and team performance, but we must not forget whom we dealt with. Despite that, the performance of our young player Ali Bongui proved that Tunisian volleyball has a bright future ahead.”

Russia now sits atop Pool C with six points, ahead of the United States (4).