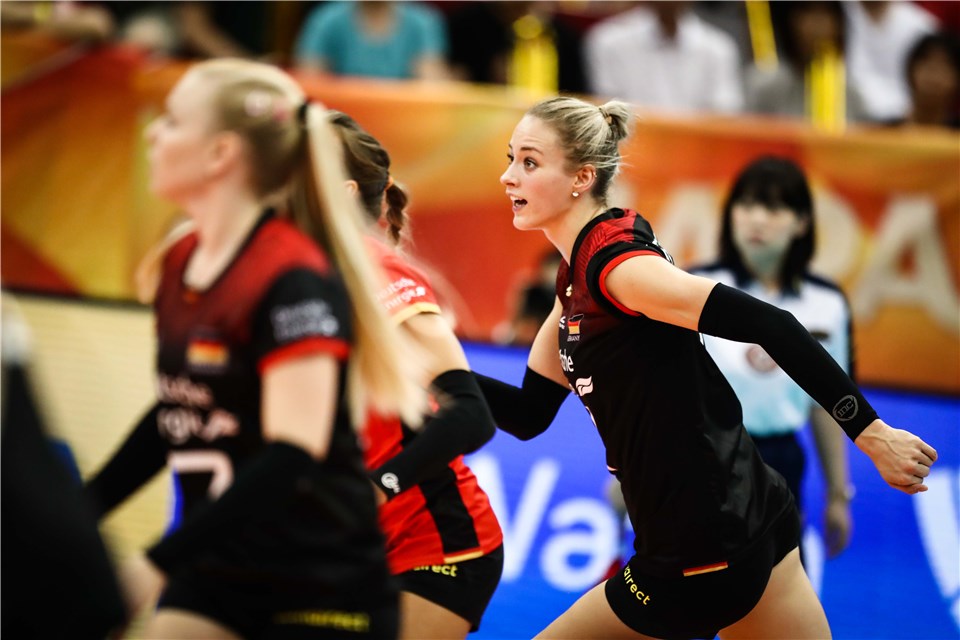 Louisa Lippmann led Germany to the biggest upset of the tournament so far on Sunday. Current Photo via FIVB

One Pool (Pool F) went more-or-less according to plan, with 4 sweeps to open up round 2 of the 2018 Women’s Volleyball World Championships, while the other (Pool E) saw pathways to the Final 6 crack wide open.

No teams clinched their spots in the Final 6, but 3 were eliminated. Azerbaijan and Bulgaria in Pool F can win, at best, 5 games. Italy and the United States already have 6 wins, while the winner of China and Russia will be guaranteed of at least 6 wins, meaning that there’s no way that those two teams can finish in the top 3. In Pool E, Mexico, with just 1 win, are already too far behind to make it into the top 3 and are playing for pride.

The big story of the day was the injury to Russia’s Nataliya Goncharova, who was the top scorer of the preliminary round. It’s unclear if, or when, she might be available again, but comments didn’t sound positive.

Not only did Germany pull off the upset of the tournament so far on Sunday, with a 3-2 win over Brazil, keeping their chances at the Final 6 alive, but Louisa Lippmann took a commanding lead for the tournament scoring title. The 24-year old opposite racked up 36 points, including 20 combined in the pivotal 3rd and 4th sets, which turned this from a Brazilian route to a German win.

She hit over 50% on 60 swings and added 4 aces and a block to her statline. To this point of the World Championships, she’s clearly one of the “Dream Team” players of the tournament.

With only 2 competitive matches on the day, if Germany gets the player, then we’ll give the match of the day to the battle between Japan and the Dominican Republic. Japan was hammering their Caribbean foes in the first set, but as their set disappeared, so did the match. The Dominican team outplayed Japan in the 2nd set (though Japan still took the frame, in extra points), and won the 3rd and 4th.

Some timely coaching from Japan’s Kumi Nakada, swapping 3 starters (including setter) for the final set, let the home team escape with a win over a Dominican team that showed off their full complement of offensive weapons in the game (including 19 kills from Brayelin Martinez).

If Japan loses that match, they’re thrown into the pile with Brazil and Germany at 4-2. As is, they’ve got an inside track at the 3rd spot in the Pool (behind Serbia and the Netherlands).

“The two teams were at a different level. Our team played badly in all skills, and maybe in reception we played very, very bad. To play good against Team USA you must take 100 per cent of your capacity but today I think we played less and less of our capacity. But our team is very young and we must work, work, work in the future. We have a different target in the World Championship for the next matches. We must take more experience for the future, for next summer.” – Bulgarian coach Ivan Petkov pulled no punches about his team’s 3-0 loss to the United States.

The waters got muddier in Pool E thanks to the Germany win over Brazil. While group leaders Netherlands and Serbia won easily, the rest of the group is still unclear. Things get more certain on Monday when Germany plays Serbia. If Germany loses, they could still advance, but it gets really tough for them, given that Japan and Brazil (the teams directly ahead of them in the pecking order) still have to play each other. That means one of those two teams will get another win.

Italy and the US stayed perfect, and there weren’t any good matches on day 1 of Pool F (though Thailand gave China a better run than the 0-3 score showed). Thailand plays Italy on Monday, and will be looking for the big upset that they’ve been close to time-and-time again at this tournament. The US versus Turkey match is a Nations League gold medal rematch, but Turkey hasn’t been the same team this week.

Things get interesting later this week when Italy and Russia; and China and the US play on Wednesday. Italy vs. the US comes Thursday.

All times below in local Tokyo time: