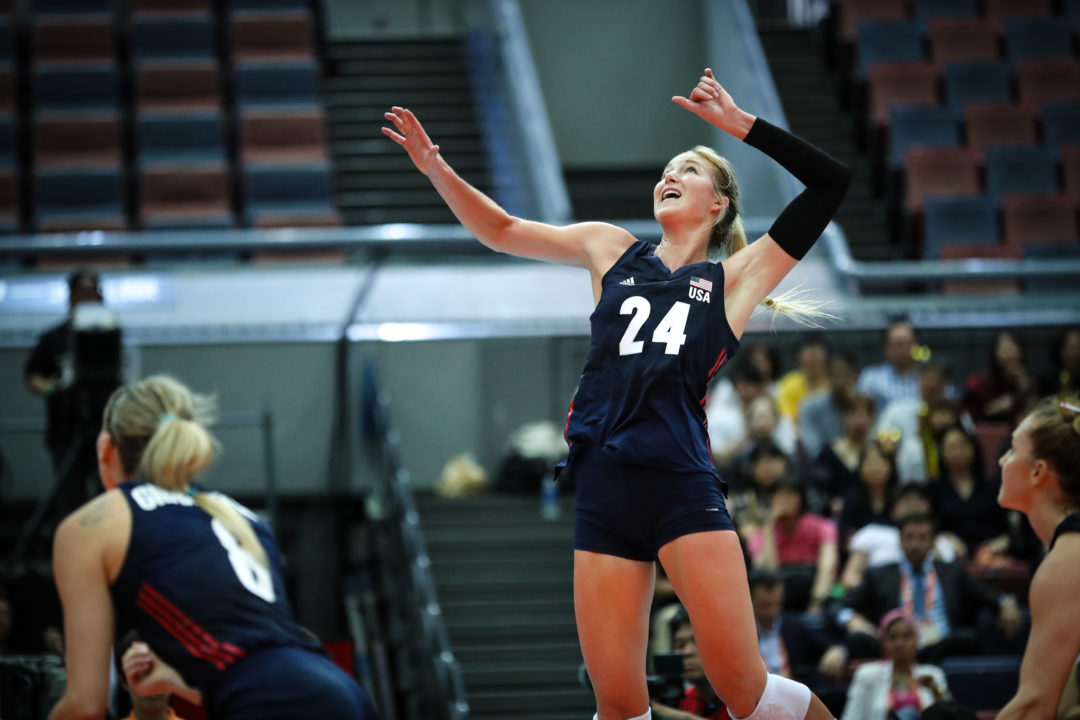 Karsta Lowe started for Team USA as the Americans rolled through Bulgaria to open the 2nd round of play at the Women's Volleyball World Championships. Current Photo via FIVB

Any hopes of a more competitive 2nd round of the FIVB Women’s Volleyball World Championships than was the 1st went out the window on Sunday in Pool F. 4 matches resulted in 4 sweeps, with the Pool’s top 4 teams (Russia, United States, Italy, and China) all topping their opponents without losing a set.

Among those teams, only China was challenged. Thailand lost 3-0, but 2 of those sets were by the minimum 2 points

The result was no real movement in the pool table, with the Italy, the US, China, and Russia still sitting on top of it, in that order. The  FIVB has managed to schedule this round so that there are still none of those 4 teams playing another on Monday, though Italy faces wildcards Thailand and the US faces Turkey in a Nations League Final rematch.

The biggest news, then, out of the pool was that Russia has lost the tournament’s top scorer, Nataliya Goncharova, to a shoulder injury. While some reports said that she was out for the tournament, Russian coach Vadim Pankov said after their match that he ‘could not say’ when she would be available.

No Goncharova was no problem for Russia, even against the 2018 Volleyball Nations League silver medalists. Russia hit better than 50% as a team (44/86) and were led by 14-point each from their outside hitters Irina Voronkova and Kseniia Parubets in the match, but the story of the day was their defense.

Russia out-blocked Turkey 11-7 in the match, led by 6 from their top middle blocker Irina Fetisova. Her 23 blocks are the most in the tournament so far.

That effort helped hold Turkey to 32.5% hitting in the match. The team has suddenly hit a wall after playing well all summer up until these World Championships.

This was a big win for Russia in their effort to advance to the Final 6. With a win of their own against China or Italy without Goncharova seeming unlikely at this point, they’ll be pulling for China to lose to the U.S. and then maybe stealing a point in that match.

The United States rolled to their 6th win to open the 2nd round and maintained an undefeated record on Sunday. In the process, they formally eliminated Bulgaria from Final 6 contention, as Bulgaria cannot mathematically catch the top 3 teams.

The Americans gave Karsta Lowe the start at opposite and left their top two middles on the bench in favor of Tori Dixon and Lauren Gibbemeyer, but did run with their two start outside hitters Jordan Larson and Kim HIll for the lopsided match. Hill, with  13 points, and Lowe, with 12, led the team, though they didn’t hit that well as a group considering the lopsided result.

“Our main focus coming into this game was to have an attack mentality,” said American captain Jordan Larson. “We had a great game plan going into this game and we served well which created a lot of defensive opportunities for us. I am really proud of our team and obviously this is a great win but we have a long ways to go. Definitely it has not been easy. I think six wins is awesome. Those have not been six easy wins. Our focus through this whole tournament is to get better every single match and I think we have done that. We hope we can keep it going all tournament.”

The team had a 44.44% hitting percentage, with Hill hitting below that at just 41.3%. But it was the American service game, as it has all tournament, that rocked Bulgaria and gave the US some margin. They had 7 aces in the match, as compared to just 1 for Bulgaria.

Nasya Dimitrova led Bulgaria with 11 points on 8 kills, 2 blocks, and 1 aces. She hit 72.3% in the match, but the rest of the team combined to hit just 29.6%. The US only had 7 errors, while Bulgaria had 21 – owed to what seemed to be a lack of communication for the Bulgarians.

Bulgaria head coach Ivan Petkov pulled no punches in his assessment of the team.

“The two teams were at a different level,” said a frustrated Petkov. “Our team played badly in all skills, and maybe in reception we played very, very bad. To play good against Team USA you must take 100 per cent of your capacity but today I think we played less and less of our capacity. But our team is very young and we must work, work, work in the future. We have a different target in the World Championship for the next matches. We must take more experience for the future, for next summer.”

Even with a loss eliminating them from Final 6 contention, Azerbaijan left Polina Rahimova (the tournament’s 2nd-leading scorer) on the bench for most of their match against Italy. That showed early, where Italy thumped their opponents, but it continued even when she entered the game later in the match.

Azerbaijan’s previous low scoring output at this tournament was 60 before they went for just 41 on Sunday.

Italy was led by 17 from Myriam Sylla on 14/26 hitting plus 3 blocks. Italy dominated the block, holding a 12-3 advantage, including 5 from their captain Cristina Chirichella.

As a team, Azerbaijan hit just 25% while earning experience for some of their younger players. The team continued to alternate setters, though the seemed to play better with Yana Azimova running the offense in the 2nd set.

A rematch of the Asian Games gold medal game finished with the same result: China winning 3-0. Thailand put up  a better fight this time, though, forcing 2 of the 3 sets to minimum 2-point victories for the Chinese.

Thailand is still playing without 3 of their best offensive weapons: Ajcharaporn Kongyot and Kokram Pimchaya were again not included on the team’s roster, while Chatchu-on Moksri is still being limited to service relief. Sittirak Onuma led Thailand with 14 points in the loss, while 34-year old Wilavan Apinyapong earned her biggest run of the tournament at outside hitter with 13 points.

China was led, as usual, byt Zhu Ting, who hit 19-for-32 and added a lock for 20 points in the match. China out-blocked Thailand 6-1, but lost 3-7 in the aces category: continuing trends from throughout the tournament, where their block has been indomitable but their service game has been lacking. Xinyue Yuan had 3 aces in the match, giving her 4 in the tournament – which ties her for the lead among Chinese players (but for only 47th overall).