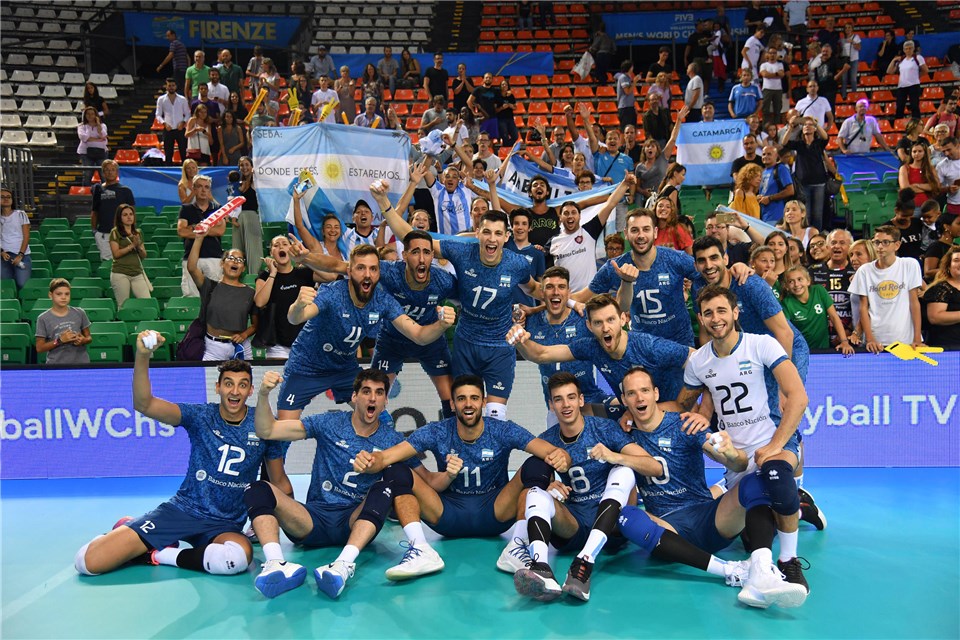 Italy had a rest day today, which meant that all of Florence’s eyes were turned towards the Argentina team to see if it would bounce back from its surprising opening day defeat against Belgium. The team did just that, although not without a first set scare against a much weaker Dominican team, which prompted coach Velasco to revamp his lineup. Meanwhile, Slovenia continued its strong maiden WCH run by defeating the Japanese squad. Here is the day’s recap:

Argentina bounced back from its stunning opening day loss against Belgium by handing the Dominican Republic a 3-0 (26-24, 25-15, 25-15) loss. Argentina only saw difficulties in the game during the first set, which prompted coach Julio Velasco to take out starters José Gonzales and Agustin Loser. Bruno Lima and Pablo Crer made the best of their chances off the bench, and helped the South American team turn the game around. At the end, Argentina closed the game hitting 64% as a team while also out-blocking its opponent 9-1 for the match.

Surprisingly, team captain and Perugia star Luciano De Cecco did not start the game, and only subbed in during the match occasionally. It is not known yet if that was part of Velasco’s plan for the game or is De Cecco is injured. Cristian Poglajen led the way for Argentina with 12 points while Henry Santana had 11 points in the losing effort. Both Argentina and The Dominican Republic will go on to face Italy next.

Argentina’s coach Julio Velasco: “We let the Dominican Republic come back in the first set, but at the end we were good enough to regroup and win that. It was very important for our mood not to lose that set. After that, the match became easier. We already lost a match versus Belgium, and from now on, it is important to take points from all remaining matches in the pool.”

Argentina’s captain Luciano De Cecco: “We are happy, since we played well except for the mid-section of the first set. We will now focus on tomorrow’s match versus Italy and we hope to play well, too.”

DR’s coach José Gutierrez: “We need more experience, since ours is a young team, which is not close to this level yet. Argentina is a top team, while we are working for our future.”

DR’s captain Elvis Contrera: “It was a very useful match for our younger teammates. We were aware of Argentina’s strength; they played good volleyball while we made many mistakes. Anyway, there is still something good we can take from this experience.”

How about that! 😲 Numerous great saves by Argentina 🇦🇷 in this rally, then it's #6 Cristian Poglajen (@CrisPoglajen) with the big hit at the end to finish it & snag the point from Dominican Republic 🇩🇴! #FIVBMensWCH #volleyball #volleyballWCHs @Voley_FeVA pic.twitter.com/II0ZwTyPYs

Slovenia continued its maiden WCH run perfectly today as it handed Japan a 3-1 loss behind a stingy defensive game in which it out-blocked its Asian opponents 13-1 (six in the first set alone) for the match. Tine Urnaut once again led the way with 19 points on 60% hitting while Yuri Ishikawa had 15 points in the losing effort. Now both teams will play against Belgium, Slovenia tomorrow and Japan on the 16th.

Slovenia’s head coach Slobodan Kovac: “We played good Volleyball against a tough opponent. Now we must improve our serve in terms of making less mistakes; anyway our attackers did a good job and also our blocks were very effective, so I am happy with the performance of my team.”

Slovenia’s captain Tine Urnaut: “It was a tough match because Japan is a really good team. The key moment was between the end of the third set and the beginning of the fourth one, when we took some decisive points to secure this beautiful victory.”

Japan’s head coach Yuichi Nakagaichi: “Today we had the chance to win at least another set, but Slovenia played well in blocking and put pressure on us with their serve. Anyway, the competition continues and we have to focus on the next match.”

Japan’s captain Masahiro Yanagida: “This was not a good game for us, and probably too easy for them, but we remain motivated ahead of the next game.”