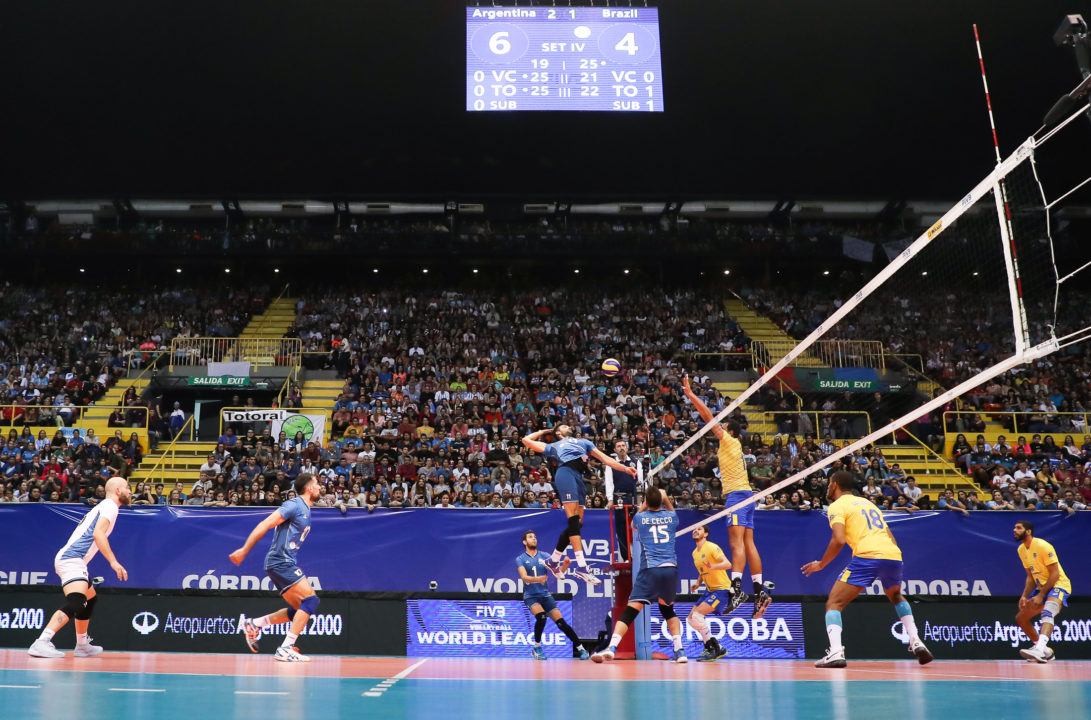 The South American showdown between Argentina and Brazil drew in more than 13,000 spectators, passing up last weekend’s Iran-Argentina match for the highest attendance figure of the 2017 World League Group 1 slate.

Note: Pool H1 was split between two sites. Thursday’s matches took place at Spodek in Katowice, Poland, while Saturday and Sunday were both held at the Atlas Arena in Lodz, Poland. For simplicity, we’ve listed Pool H1’s host as Lodz.

Argentina pulled big crowds, beating out Poland’s aggregate attendance figure even without including the unknown attendance at Sunday’s final match between Argentina and Bulgaria. If that match drew the average home attendance for a match involving Argentina (10,325), then Argentina would soar past Iran for the highest total attendance at more than 48,000 over six matches.

Week 3 had two of the three highest sites in average attendance, but also the lowest attendance site of all 9 hosts in Antwerp, Belgium. Belgium only pulled about 2000 fans per match, never cracking 3500 for any single match. That was despite Belgium’s pool including the tournament’s best team – France – along with final round qualifiers Canada, and with Belgium in the hunt for a spot in the final round. Ultimately, Belgium finished 7th, missing the finals by one spot.

Week 3’s hosts all had pretty consistent attendance, without major spikes for the home team, at least compared to previous weeks. Belgium’s attendance went up about 150% for matches involving Belgium compared to those not involving the host team. But that only ranks 5th among the 9 host cities for home attendance boost.

Argentina had extremely high attendance across the board, with the highest average figure for matches not involving the host nation by a longshot. Matches in Argentina not involving the Argentine team drew an average of 5700 spectators – more than double the previous site high. Poland had the second-highest figure at just over 4200. Some of that might be attributable to every match taking on more significance as teams made their final pushes for final 6 berths. Argentina also got a boost from 2 of its 3 non-Argentina matches featuring neighboring Brazil.

Saturday’s matches drew the highest attendance, reversing the trend of the past two weeks, in which Saturday’s attendance was lower than both Friday and Sunday. Meanwhile, Sunday attendance was relatively low in week 3, though that figure doesn’t include the unavailable attendance figures for Argentina-Bulgaria, which would likely bring up the average significantly.

Argentina has now been involved in the two most-attended matches of the event so far. 13,150 turned out to see the Argentines play Brazil at home, and 12,000 attended the Argentina-Iran match in Iran last weekend.

Of the 6 matches with less than 1000 spectators throughout the tournament, 3 have featured Belgium and 1 was hosted in Belgium.