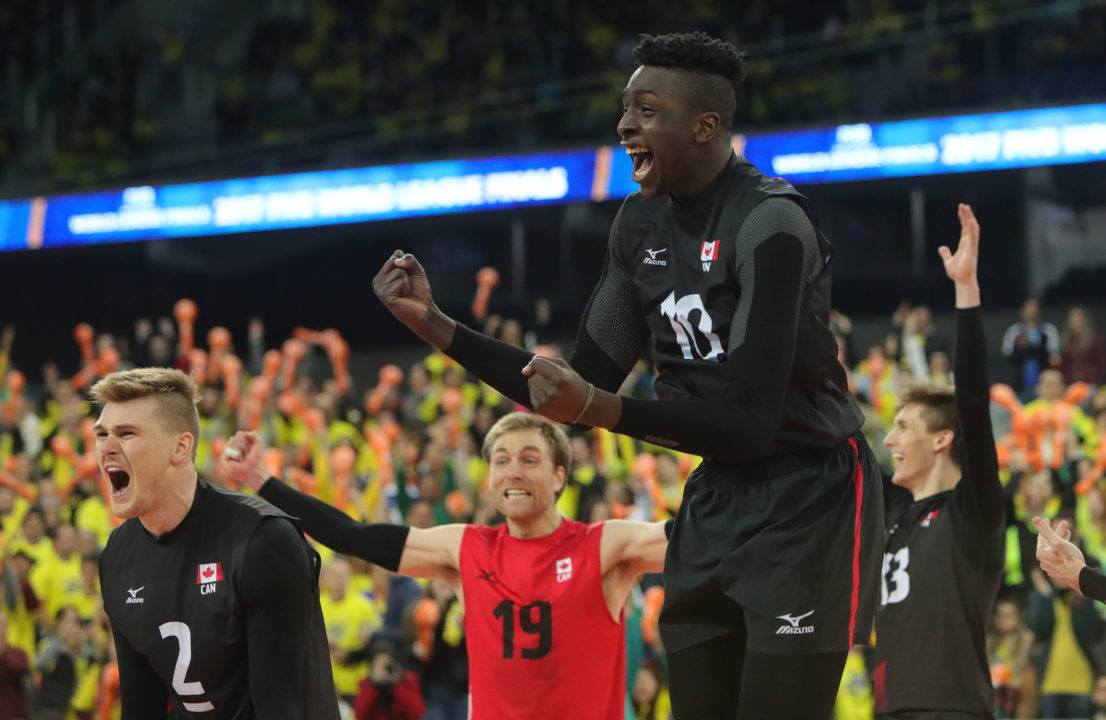 Canadian opposite hitter Sharone Vernon-Evans has been leaping out of junior national team gyms for years. The 18-year old is so... Current Photo via FIVB

Canadian opposite hitter Sharone Vernon-Evans has been leaping out of junior national team gyms for years. The 18-year old is so athletic, that it’s been surmised that he might have been too good for the junior circuit – that the passing and setting wasn’t good enough to keep up with his record-setting leaping abilities that saw him touch 12’6.5″ (382cm) in April.

And so, fresh out of high school, before playing his first professional season in Poland, and without having ever really seen the level of competition that he was about to face, was thrust onto the senior National Team.

At 6’8″ tall, he fit in with the team physically with no problem. But he lacked the experience that the rest of the gritty Canadian team had, and it showed early. Vernon-Evans was inconsistent early in the tournament and as a result received inconsistent playing time. In one match in the 3rd weekend of pool play against Belgium he barely saw the court at all and had a vacant statline.

But as the stages of pool play closed and the Final 6 began, things began to click for Canada and Vernon-Evans. Between the last game of pool play and the four games Canada played in the Final 6, he got much m ore consistent, his stat-lines became fuller, and he had fewer errors. While he didn’t play as well in the team’s final game, a 3-1 win over the United States, in the 2nd set he was dominant and provided Canada a big lift when they desperately needed one after the Americans won the first set.

Canada’s new coach Stephane Antiga, has again shown himself to be a volleyball savant. Antiga, whose first coaching job was an impromptu role leading Poland to the 2014 World Championship, has played Vernon-Evans’ development just perfectly, and set him up to learn even more when he heads to Poland this fall.

“When you taste that, you want to repeat it and that’s really our goal,” said Antiga. “We need to train the younger guys and have a wider group of players to generate some competition between them. We want to improve our programme and get good results, but we also want to develop players.”

Vernon-Evans wasn’t perfect. As his hitting improved, his service game struggled (he had 12 service errors across the last 3 games, the same as in the first 10 combined. But even in the last game, against the United States, where he didn’t have his best outing, his development was highlighted when lined up against America’s young, promising opposite: Ben Patch. Patch struggled early and wound up being pulled from the game for Carson Clark – a more experienced, but far less talented, opposite. Like Vernon-Evans, Patch is just getting his feet wet with the senior national team, and has played a big role in their success in this year’s tournament. The difference is that Patch’s ‘young potential’ is 23-years old: 5 years older than Vernon-Evans’.

Both project to be starters for their national teams down the road, but even with 5 years less time on this earth playing volleyball, Vernon-Evans looked better than did Patch.

See Vernon-Evans’ stat progression below. He hit .348-or-better in 4 of the last 5 games in which he played.