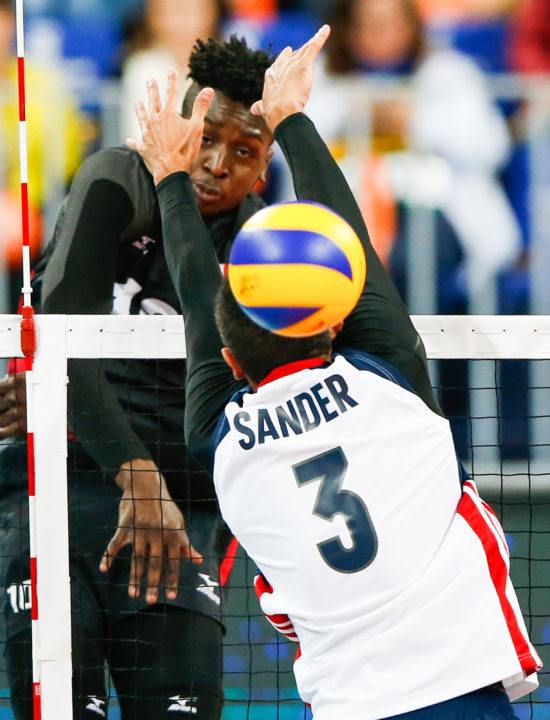 Canada wins the third-place match by coming back from a one-set deficit to defeat Team USA. Current Photo via FIVB

The U.S. Men’s National Team came up on the losing end of a four-set match with Canada as the two North American countries battled for the bronze medal at the 2017 FIVB World League. It was the third straight win for Canada over Team USA in a major competition, who also lost in five sets in the first week of the group phase to Canada. Prior to that, Canada won in straight sets in the pool phase at the Rio 2016 Olympic Games. That match, like the one today, was played in Brazil.

For Canada, this wraps up their best finish in FIVB World League history. After winning Group 2 in 2016, they earned promotion to the top stage. Their previous best finish was fifth back in 2013, so they were already secured of the best finish in team history, but now they wrap it up with a bronze medal and a place on the podium.

The first set would have indicated a match that heavily favored the United States. After the two sides traded the first eight points, Team USA won three in a row for 7-4 lead. The score stayed about the same, with Canada pulling a point closer later on. An ace from David Smith (14 points – eight kills, four blocks, two aces) pushed the U.S. back up to three at 14-11. Then, they finally pulled out to a four-point lead when Taylor Sander (14 points) blocked John Gordon Perrin (13 points). At 19-16, Smith had another of his team-best six first set points on a block. He assisted on the next one with Ben Patch (12 points) for a 21-16 advantage. As the set dwindled to its close, the United States held match point at 24-18. A roll shot from Thomas Jaeschke (12 points) ended the set at 25-18 as USA ended on a 6-2 run.

Graham Vigrass (12 points) got Canada the first point in set two, establishing a new mentality in the second as they would claim five of the first seven points. Eventually the U.S. crept back and a strong serve forced Canada out of system and to hit the ball into a triple block. Team USA got another block on the very next point as Patch got the stuff to even the match at a dozen. After Canada won the next point, a long rally that featured three digs ended with a Perrin roll shot into the middle of the court for another two-point advantage. The U.S. would close to make it 19-18, but Canada hit a 3-0 run that helped them finish strong and win the set 25-20.

In a crucial third set with the match tied 1-1, the U.S. made a lineup change by bringing in Jeffrey Jendryk for Daniel Mcdonnell – the same time and player substitution made in the first meeting with Canada. Team USA took the first point of the set for the first time in the match. Canada switched the lead off back-to-back aces from Ryley Brendan Barnes (11 points) to make it 7-6. Then the U.S. hit two straight to lead at the technical with a Jaeschke kill, one of his six in the set, as it would be representative of how much the lead would teeter between the sides. That ended not too long after though when Canada pushed ahead for a 13-10 lead. They would hold onto that advantage and just as the U.S. got in striking distance, 18-year-old Sharone Vernon-Evans (12 points) threw down a heavy swing on a back row attack from the right pin for a 23-21 lead. It was one of five kills for him in the set as Canada won it 25-22 and took a 2-1 lead.

Ben Patch, the youngster who had exploded for huge point totals in several different matches for Team USA, struggled a bit in this one. He did have 10 kills, but on 25 attempts that featured numerous errors. A change was made in the form of Carson Clark for the set. The move seemed to work early, as the Americans jumped ahead by taking five of the first seven. However, Canada responded with four of five as Perrin tied it after a long rally. Canada even won the next point for a lead, but the U.S. would tie and get a Jendryk block to re-position themselves in front 8-7. Canada again countered by winning five of seven for a two-point edge. Finally when the U.S. gained traction and a 15-14 lead, they lost it ever so quickly as Canada moved in front 18-15 after four straight. The Canadian side provided a stingy defense throughout, as they did on the next point when the U.S. kept alive a lost joust with a kicked ball, but were thwarted by great defense from Canada. Lucas Van Berkel put down the kill on that point to end the rally and make it 19-15. Realizing it was do-or-die, the United States won three straight to force a Canadian timeout at 19-18. A service error followed by a Sander strike gone astray added to the Canadian lead at 21-18. Clark had an error on the next point and Team USA never recovered, losing the set 25-21.

Canada’s victory gives them the bronze medal and the best finish in country history in the World League. For the U.S. men, it’s not an ideal ending, but one that was better than last year. In 2016, Team USA finished fifth. The young team could not win in the semifinal or final round, but considering they started the tournament 0-3, it wasn’t a bad run for a young U.S. Men’s National Team.