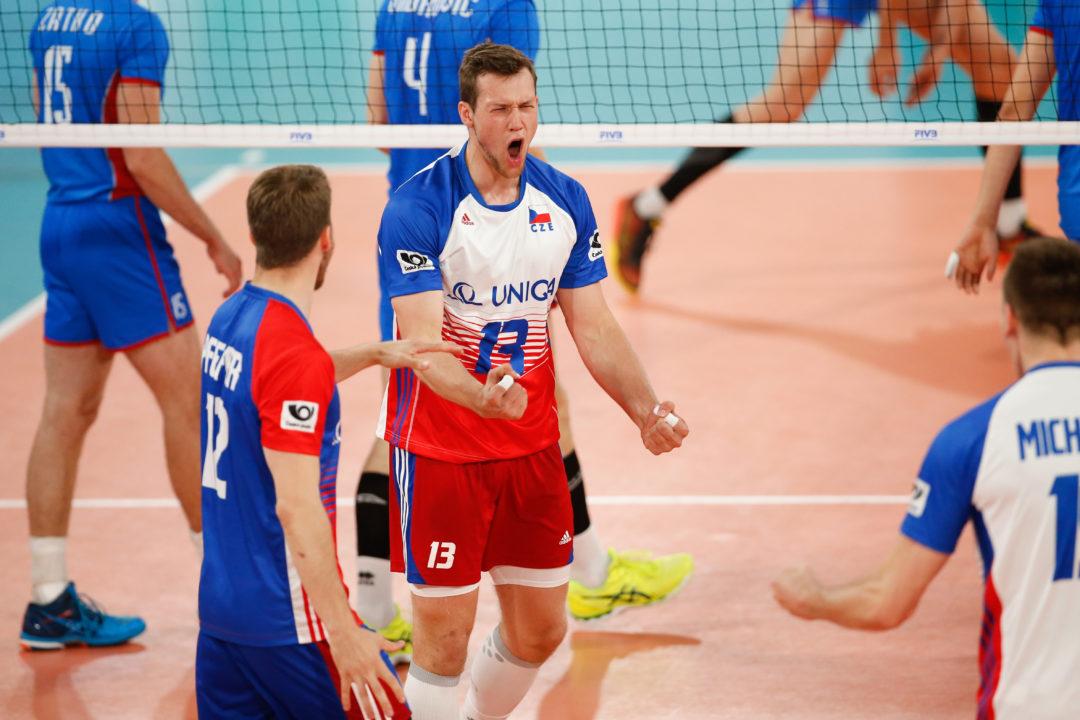 The Czech Republic inserted themselves back into the final four mix as they gave Slovakia a huge loss. Current Photo via FIVB

Coming into the week, Pool I2 in Group 2 was the most intriguing as both Slovakia and Netherlands were in the three-way tie with Japan at 12 points. The issue is that with Slovenia above everyone else and Australia the final four’s host, only two of that group at 12 (or less if a surprise team came up) can advance further.

The Czech Republic were the sleeper team of the group, coming into the week with nine points at 3-3. They have a chance this week to do damage to teams in front of them and move up as a late surprise to the final four. Things got off on the right foot as they not only upset Slovakia, but did so in straight sets.

In the other match, the Netherlands cleared the rubble of Slovakia and Japan’s losses to move into second in the overall Group 2 table after a three-set sweep of Korea.

Czech Republic likely needs three wins this week (or at the least two with some help) for a late run into the final four. They got their first, improving to 4-3 overall with a three-set sweep of a now disappointed Slovakia.

The opening set started in favor of the Czechs at 14-12. It would only get better as they would win 11 of the final 15, capped off by a Slovakia serve error, to take a 1-0 set lead.

Set two had a similar start, with Czech Republic leading 14-13, but this time Slovakia had more staying power. Slovakia eventually tied the set at 22 as Peter Mlynarcik had one of his team-high six points. The Czechs immediately answered with two straight and eventually a short-cross of Jan Galabov ended the match on one of his match-high 18 points.

Slovakia may have felt drained after losing the first two sets, because Czech Republic worked its way to a 16-7 advantage in the third. Slovakia played better from that point on as they totaled 10 of the next 18, but they still sat behind 24-17. Adam Zajicek finished the match with a kill out of the middle in a dominating Czech performance. The Czech Republic threw down more spikes (36-33), blocks (11-4), aces (6-4) in addition to recording seven less attack errors.

“This was a very big important win. Extra special for us, since Slovakia is like a brother to us,” Czech Republic middle blocker Marek Beer said to FIVB. “Today we did everything right and showed clean play.”

Now, the Czech Republic have the same win total as Japan, who would currently be the last team in the final four. The only difference is Czech has 12 points to Japan’s 13. They’ll get another chance to take out a team in front of them in the Netherlands on Sunday while they’ll challenge Korea tomorrow.

Slovakia also has 12 points on four wins, but now sit in a tougher spot than they entered the day on the outside looking in. Tomorrow is crucial as they face the Netherlands, who are three points in front of them. A three or four set loss might make Sunday’s meeting with Korea futile.

After Japan and Slovakia fell earlier today, Netherlands had a chance to pull ahead for second in front of a home crowd. They were able to do so in three sets, with the final two in dominant fashion.

Korea was the team who struck first, up 8-7 early. However, six unanswered by the Deutsche gave them a 13-8 advantage. The Netherlands would then pull ahead 24-18 down the stretch. Just as Korea thought of a comeback with three straight points, point match-leader Wouter Ter Maat put down a kill.

The run continued for Netherlands after jumping ahead 8-2 in the second. That six point lead carried out to 16-10, until Korea rallied off four straight, completed by a Yoon-Sik Yoo block. After Netherlands pulled away a bit at 20-15, the Deutsche used a commanding block for two straight points. In total, it was nine of the final 11 going the way of Netherlands for a 2-0 set lead.

Jiseok Jung pushed Korea to a 10-7 lead in set three. Netherlands turned on the jets from there, winning 17 of the next 23. Ter Maat then struck again for his 16th and final point to give Netherlands the sweep.

“We played steady and clean today,” Netherlands coach Gido Vermuelen told the FIVB after the win. “Our block was super and our side out clean. We never got into trouble, hopefully we manage to continue that this weekend. Tomorrow awaits another ‘final’ that we have to win. Again we will do everything we can to win in this fantastic hall and for this great audience.”

Both teams had similar spike numbers as in fact the point totals from kills and opponent attack errors evened out. Netherlands terrorized Korea though with the block (14-1) and aces (9-0), for a 22-point swing.

Netherlands is now one of just three teams with five or more wins. They also have the second most points at 15. Now comes the challenging part of the pool for the Deutsche, as they get Slovakia tomorrow and the Czech Republic the day after. Both teams are just one win and three points back of the Netherlands.

The loser of the match, Korea, now drops a game below .500 at 3-4. They’ve collected seven points and now sit in ninth. They’ll need to take down the Czech Republic tomorrow and Slovakia on Sunday to even have a chance (although still not a certainty) of the final four.