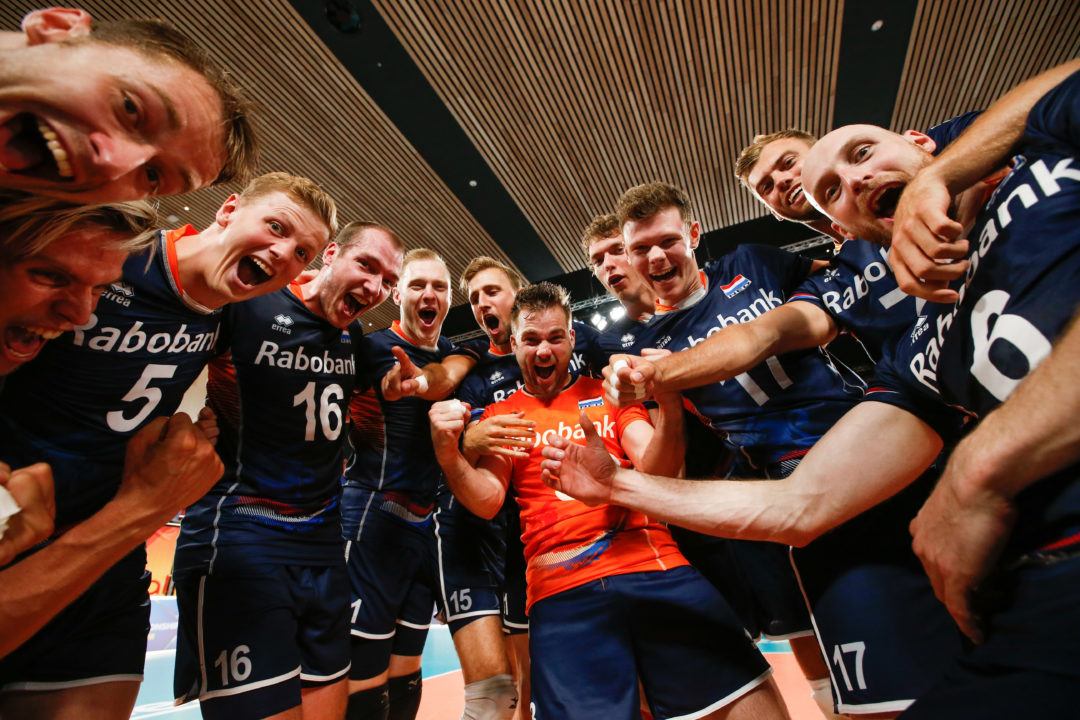 The Netherlands downed Slovenia to move to the top of Pool I2 and secure a spot in the Final Four with a 2-0 record. Current Photo via FIVB

The Netherlands downed Slovenia to move to the top of Pool I2 and secure a spot in the Final Four with a 2-0 record, while Korea topped the Czech Republic in three sets.

The Netherlands posted 10 more kills and got seven extra points from Slovakian errors (26 overall) in a sweep for the top spot in the group on Saturday.

The Dutch raced out to an 8-5 lead in Set 1 and Slovakia didn’t help its own cause, committing a plethora of errors, as the Netherlands sailed to a 25-21 win. Slovakia took the early advantage in Set 2, going up 7-4, but the Netherlands regained the edge at 9-8 and held on for an 18-17 lead. Slovakia leveled the score at 22, but Wouter Ter Matt capped the set at 25-23. The Dutch led Set 3 from wire to wire, going up 13-6 and 21-13 before a block by Thijs Ter Horst and Thomas Koelewijn wrapped up the match at 25-15.

“Again we played steady,” Netherlands captain Jasper Diefenbach said. “We showed how strong we are physically. Slovakia had some injuries, we didn’t. We have a strong, fit team and we are all really competitive. We worked extremely hard to reach this goal. It will be our third final four in three years. This time we want to reach the final and earn a spot in group 1 of the World League. We are hungry for more.”

Ter Horst scored 13 points, with 11 kills and two aces, while Wouter Ter Maat added 12 points, all on kills, to lead the Dutch effort.

“We couldn’t get a grip on their attack,” Slovakian coach Miroslav Palgut said. “They were more eager to win and played really steady. It was not enough and I am disappointed that we won’t go to Australia. The Netherlands will have a chance there, when they play like today. Four strong teams there, they all have a chance.”

Korea registered 13 more kills and two more blocks in a back-and-forth battle with the Czech Republic on Saturday.

After a tie at 7-all, Korea surged ahead 11-9 and 20-14 before finishing off the stanza with a Hong-Suk Choi ace for the 25-18 win. The Czechs bounced back, taking an 11-7 lead in Set 2, but Korea knotted the score at 12. Down 22-20, Korea came back to have the first set point at 24-23. It would take two more for the Koreans to post the 27-25 win. The third set saw the teams tied at 16-all midway through and again at 19. The Koreans ended the set with six of the final set points, winning on a Slovekian service error.

“I am very proud of my team,” Korean captain Sun-Kyu Lee said. “Yesterday we did not get into our rhythm, today we played more steady. I hope we get enough rest so we can finish the tournament in a great way tomorrow.”

“Mentally we were ready to win, but Korea started really well, their defense was amazing,” Czech captain Alex Holubec said.  “On top of that, we did not get a grip on their attacks in the first set, as their setter did other things than we expected. We got too stressed and tried too hard. We played better in the second and third act, but still lost the important points.”