Dutch Wrap Up Homestand 3-0 with Win Over Czechs 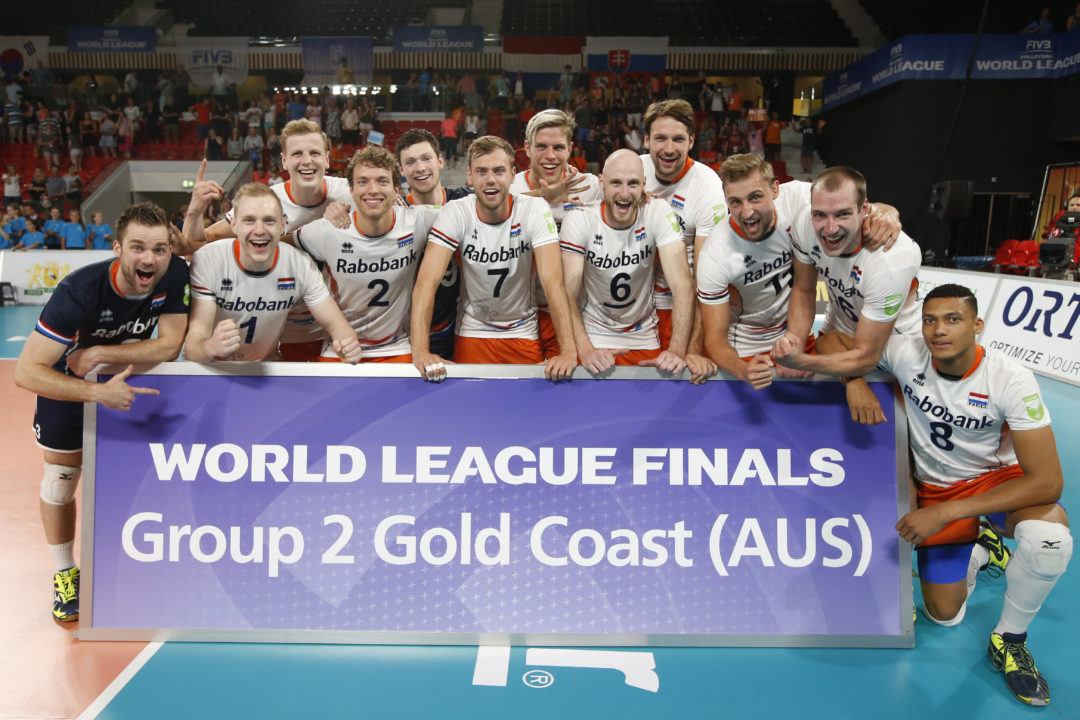 The Netherlands secured the top spot in Pool I2 and kept the momentum going heading into the Final Four in Australia with a four-set win over Czech Republic, while Korea finished second with a five-set thriller against Slovakia.

The win was the third straight for the Dutch on home soil.

Ten points divided the teams (103-93) in a five-set thriller between Korea and Slovakia in Pool I2 action on Sunday. The difference was five Korean kills, four aces and one Slovakian error.

Korea raced ahead 6-0 in the decisive fifth set, including an ace by Park, and led 8-2 at the changeover. Trailing by seven at 10-3, the match was out of reach for the Slovakians who never recovered and gave up a service error to end the night.

“I told my players that concentration was the key to win the tie,” Korean coach Hochul Kim said. “They clearly succeeded in that mission.”

Milan Bencz registered 19 points for Slovakia, including 18 kills, and Filip Gavenda (11) and Peter Ondrovic (10) followed, but it was not enough. Ondrovic put up five blocks in the match.

“Our problem was that despite of three perfect passes of the Korean services, we were not able to score the side out,” Slovakian coach Andrej Kravarik said. “And when you start with an error of five points, it is almost impossible to bend it over again.”

The Dutch tried a few new things, including moving libero Gijs Jorna from libero to outside hitter when Robbert Andriga went down with an ankle injury in Set 3, but nothing could stop the team from topping the Czech Republic and going 3-0 at home en route to Australia for the Final Four.

The team outblocked its foe 16-6 and registered 52 kills along with 29 points from Czech miscues.

“We played for the pool win today — for our home crowd, but also for the financial reward,” Wouter Ter Maat said. “Tomorrow we fly to Australia. I think we have a good chance there, as we play a steady, good level.”

Jan Galabov was the top scorer for the Czech Republic, turning in 15 points, with 13 kills, a block and an ace.

The Czechs took a 19-18 lead in Set 1 and had the first set point chance at 24-23, before handing on for a 28-26 victory. The Dutch raced ahead 5-1 in Set 2 and carried the five-point edge ahead to 12-7. The Czechs would get no closer than three the rest of the way. Andringa was hurt with the score tied at 5-all in Set 3. The teams tied again at 11 and 21, before a block and a Czech error gave the Netherlands the 25-21 victory. The Dutch led 16-7 at the second break of Set 4 and boasted a 19-10 edge when Michael Parkinson went down with an injury. Even that could not slow the home side, which ended the match at 25-13 on a Czech service error.
“In Australia, we will have to play our best every single match to have a chance on the win,” Netherlands outside Gijs Jorna said “A tough job, with European runner up Slovenia, Australia on home ground and Japan, a team we don’t know very well.”