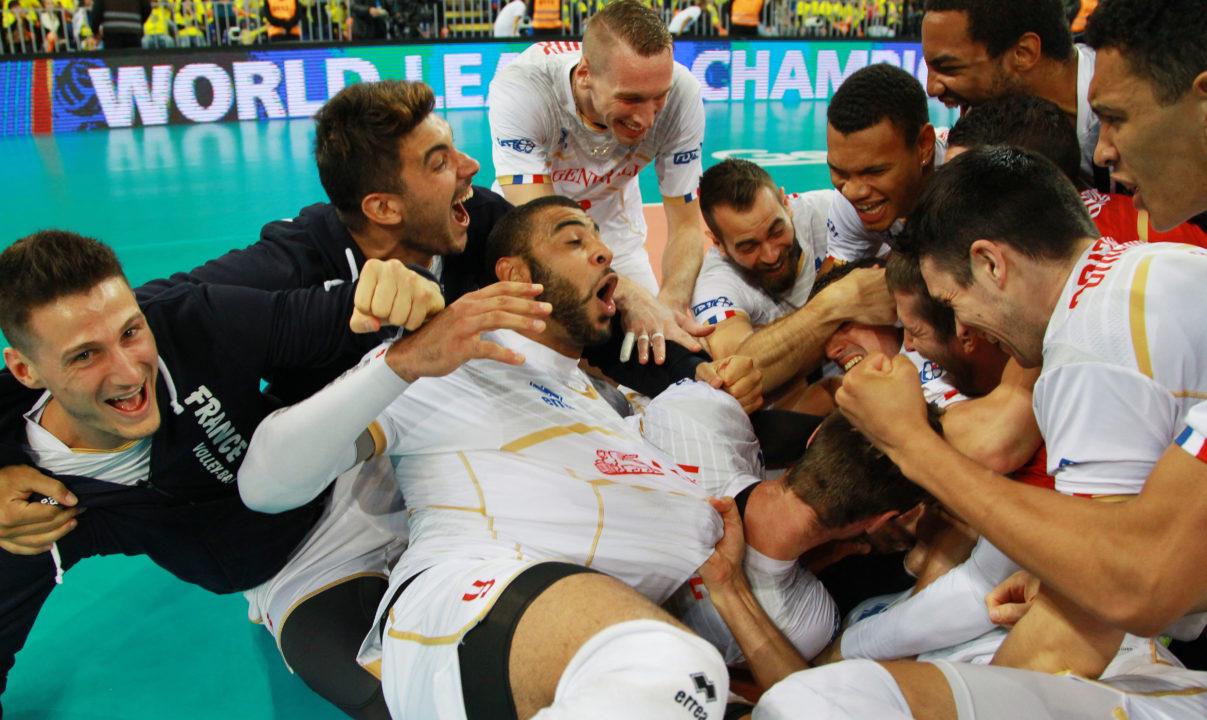 France won their second-ever FIVB World League title in their 3rd finals appearance, which ties them with the United States... Current Photo via FIVB

France won their second-ever FIVB World League title in their 3rd finals appearance, which ties them with the United States at 2 titles in history – the 4th-most in tournament history.

The French men have been a part of organized volleyball since it first gelled into a semblance of the volleyball that we now know. They placed 2nd at the first-ever European Championship tournament in 1948 in Italy, and a year later placed 6th at the first FIVB World Championship.

In the period in between, France has by-and-large stayed relevant in volleyball, but have never been able so sustain a spot at the top of the mountain. They failed to qualify for the 1994 and 1998 World Championships, and have only qualified for 4 of the 14 Olympic tournaments – which included missing the 2008 and 2012 Olympics.

After winning the 2015 World League, their first, France had high hopes going into the 2016 Olympic Games in Rio, but they went 2-3 in pool play and ran into a Brazilian buzzsaw just as they were getting hot in the last match of pool play to be eliminated from the tournament. They finished in just 9th place in that tournament.

That French team from Rio came back to this year’s World League relatively-intact, though. They lost Antonin Rouzier, the MVP of the 2015 European Championships, who retired from international volleyball. It was addition by subtraction, though – his absence opened the door for Stephen Boyer, who wasn’t on the Olympic team, to take center stage. He was the leading scorer of the entire World League tournament, and held France together while Earvin Ngapeth was recovering from an abdominal injury.

When Ngapeth returned, it took France some time to really gel and return to playing their best volleyball, but when they did, they delivered a performance for the ages against Brazil in the final.

They also found that they had an even younger talent, 19-year old Barthelemy Chinenyeze in the middle to play alongside Kevin Le Roux

They still need to shore up at the outside hitter position, where Julien Lyneel and Trevor Clevenot both showed inconsistent flashes of brilliance. When Kevin Tillie, son of the coach Laurent, returns, that will be less of a concern – and Lyneel and Clevenot will be among the top reserves in the world.

France has a few injury concerns besides, including a head injury to Le Roux, but still managed to be clearly the best team in this year’s World League. When Ngapeth came back, he very-nearly added his name to the 30-point club, scoring 29 in a 5-setter against Brazil in the championship match.

Ngapeth was at his best on Saturday, swinging deep from 12 feet deep, and using his unique round-house swing effectively. He wowed fans with his inexhaustible bag of tricks that are more than gimmicks.

France has now been on top of the World League podium twice in three years, separated by only Rio disappointment. They were the only European team to make the semi-finals, and will put their quality to the test later this summer when they play against the rest of Europe at the European Championships and at World Championship qualifying.

France is a young team, led by a player’s-coach Laurent Tillie, who himself was a 14-year member of France’s National Team. He played in an astonishing 407 international matches for France, including at the 1998 and 1992 Olympic Games, and understands what his team is going through.

France has all of the makings to finally affirm a sustained run of greatness where they are a threat to win every tournament in which they enter. That puts them in a rare class that right now is limited to they, Brazil, and then the United States and Italy, when they’re at full-strength.