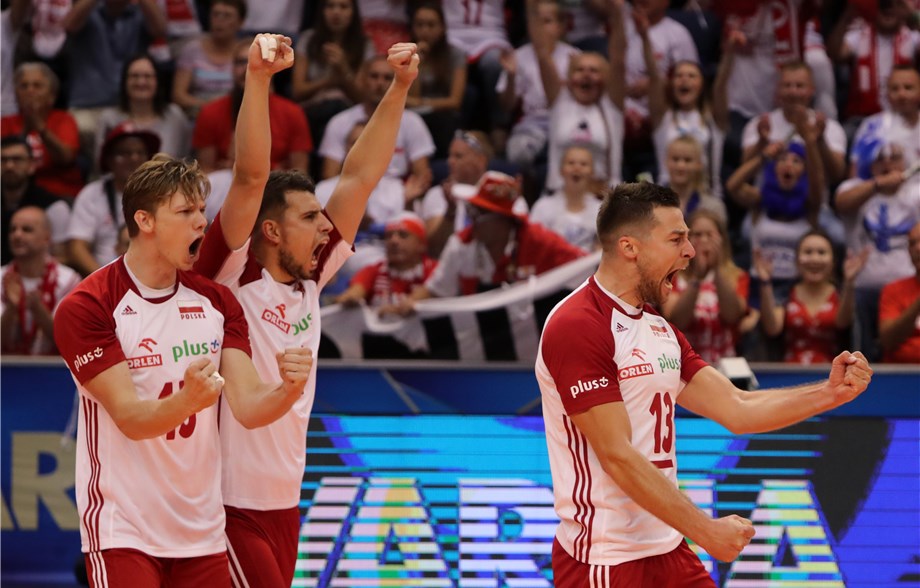 An overwhelming offensive effort gave Iran the advantage in a sweep of Puerto Rico, while Poland relied on its block in a four-set win over Cuba to kick off the second day of Pool D play.  Current Photo via FIVB

An overwhelming offensive effort gave Iran the advantage in a sweep of Puerto Rico, while Poland relied on its block in a four-set win over Cuba to kick off the second day of Pool D play.

The wins put Iran and Poland atop the pool standings alongside Bulgaria, which topped Finland on Sunday.

“It was a great beginning of the championship for us,” Iranian coach Igor Kolakovic said. “We respected a lot our opponent Puerto Rico. We did a really good job and I am very happy about the result as well as about the support we got from Iranian fans who came here especially for the tournament. I hope it will be the same in the upcoming matches.”

Fresh off a title at the Asian Games, Iran wasted little time stating its claim on the match vs. Puerto Rico, jumping ahead 14-7. The Iranians opened the door briefly at the end, wasting three set point tries before Saber Kazemi capped the 25-19 win.

Iran led Set 2 from wire to wire despite swapping out its starters at the second technical timeout.

Puerto Rico managed an 8-6 lead in Set 3, only to see it slip away in a 7-1 run for Iran. Kazemi again came up big at the end of the match, serving up three straight aces to clinch the win.

Maurice Torres posted 10 points on seven kills, a team-high two aces and the team’s lone block to lead the Puerto Rican effort. Eddie Rivera followed with eight points, all on kills. No other player managed more than four points in the match. Coach Oswald Antonetti was searching for answers in the match, putting 13 of his 14 players on the court.

“We played well today I think but we also have a lot of job to do,” Puerto Rican captain Angel Perez said. “Our next opponent is Bulgaria – the host and one of the favorites here. They are very good in blocking and attack and it is going to be a tough game again.”

Poland piled up 14 blocks, including five by Bartosz Kurek, and had help from 28 errors in a four-set win over Cuba.

The Poles also bested the Cubans 49-42 in kills to overcome a 9-5 deficit in aces.

“Cuba has a young, but very talented and explosive team,” Poland’s Grzegorz Lomacz said. “As you saw, we had some problems in third set, but our experience helped us a lot. Our team works step by step and we are looking forward our next game tomorrow against the team of Puerto Rico.”

Artur Szalpuk registered a match-high 20 points with 17 kills, two aces and a block. Kurek was right behind with 17 points, adding 12 putaways to his five stuffs. Michal Kubiak posted 14 points with nine putdowns, three blocks and two perfect serves. Piotr Nowakowski was key on the block with three stuffs to go with five kills and an ace.  Head coach Vital Heynen went to his bench just three times in the match.

“It is always hard to play against the world champion especially in your first game of such a big tournament,” Coffigny said. “The Polish team played good volleyball and it showed really great blocking skills. I hope that we will be better in the next matches.”

Poland scored early and often in Set 1, jumping ahead 8-3 and then boasting a 16-8 advantage en route to the 25-18 win. The Poles were doing so well in fact that Heynen opted to rest Kurek and Szalpuk the remainder of the stanza.

In Set 2, the Poles led by four at the first and second technical timeout, although Cuba rallied to within two at 20-18. A trio of errors, one hitting, one serving and one on reception spelled doom for the Cubans in a 25-19 loss.

Set 3 was much closer with Poland leading by just one at 16-15. Cuba came through with its serve closing a 25-21 win including aces by Yohan Leon and Jesus Herrera.

The Cubans carried the momentum to an 8-4 lead in Set 4, but Poland returned to form and turned the tables with a 12-2 run putting the set and match out of reach. Damian Schulz issued the final blow.