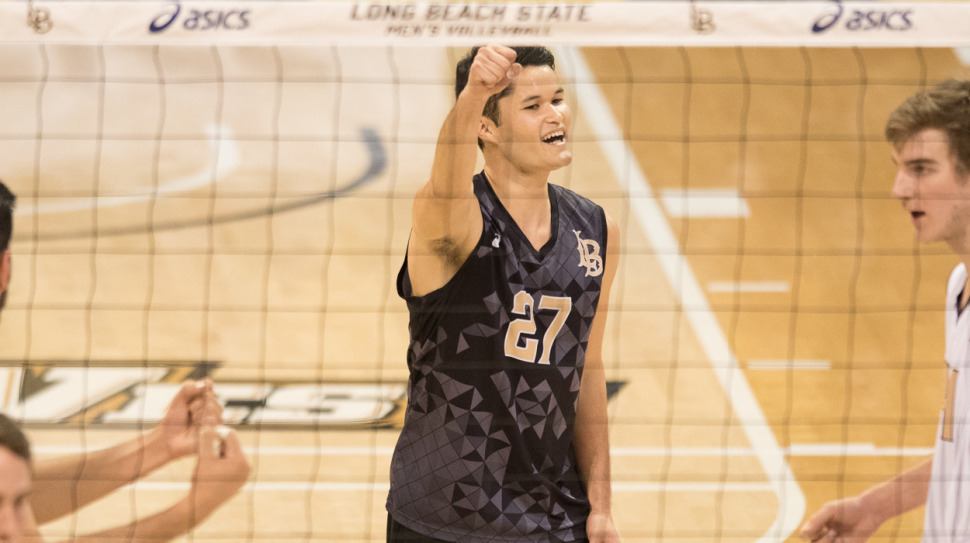 Top-seeded Long Beach State University advances to the MPSF semifinals with a 3-1 win over USC. With the match tied 1-1, the Beach won two in a row to win by scores of 25-22, 24-26, 25-18, 25-23. LBSU finished with eight service aces, breaking the record for most aces by the Beach in a conference tournament game since 2009.

Sophomore outside hitter Tj Defalco led the Beach with 12 kills on a .355 hitting percentage to go along with six digs. Sophomore opposite Kyle Ensing followed with 12 kills, while sophomore setter Josh Tuaniga finished the match with 43 assists and nine digs. Senior libero Andrew Sato led the defensive effort for the Beach with 15 kills, marking his 44th career double-figure dig contest, which is a new LBSU record. Senior middle blocker Amir Lugo-Rodriguez contributed six blocks and seven kills for a hitting percentage of .636.

USC got the early lead in the first set, 5-2, before the Beach used a four point service run to go up 6-5. The Trojans took the lead again, but it was cut short by two service aces from Defalco, tying the score at 13-13. The Beach took the lead at 17-15, forcing USC to take a timeout. Out of the timeout, the Beach used a 6-4 run to force yet another Trojans timeout; but it would not be enough to stop the Beach as they would go on to win the first set 25-22.

In the second set, both teams exchanged points early on before LBSU found themselves on top 11-7. With the Trojans facing a four point deficit, 16-20, they used a 6-2 scoring run to tie it at 22-22 before eventually pulling out the second set 26-24.

LBSU opened the third set with a quick 7-2 lead, forcing USC to burn a timeout. The Trojans attempted to make their way back into the game, closing the gap to 5-7. However, the Beach pushed their lead again to 16-8 and then to 23-14. The Trojans scored four in a row to bring the score to 23-18 in favor of the Beach. After an LBSU timeout, the Beach scored two more to take the set 25-18.

#1 seed LBSU advances to play the #4 seed UC Irvine in the MPSF semifinals.

Long Beach State advances to the Semifinals and will face No. 5 UC Irvine on Thursday, April 20 at 7:30 p.m. at Walter Pyramid.

The Beach finished the match with eight service aces, which was the most by an LBSU men’s volleyball team in a conference tournament game since 2009 when the team tallied eight aces at Pepperdine to tie the 2001 squad which amassed eight against the Waves eight years earlier. Sophomore outside hitter TJ DeFalco was a big proponent in the Beach’s success on the serve as he knocked down four aces in the match which set a new single-match record when playing in a conference tournament for Long Beach State.

“Aces are the bonus of serving tough,” Long Beach State head coach Alan Knipe said. “I thought we served really well all night long. There was a stretch where we missed a couple back-to-back. But we also served really tough in the first two sets and only had two or three hitting errors at that point. It’s been really good for us all season.”

“I love that TJ helps us score points in every facet of the game,” Knipe said of his reigning MPSF Player of the Year. “It’s more than just his skill set, but the intangible parts of the game — volleyball IQ, how the system plays, reaction plays, seeing a play develop before it happens — there are so many things he does to help us.”

The Beach also got a solid performance out of sophomore setter Josh Tuaniga who concluded the match just one dig shy of a double-double. Tuaniga dished out 43 assists to pace the Beach offense that hit .315 in the contest, which adding nine digs, three block assists, two kills and one service ace.

At the net, senior middle blocker Amir Lugo-Rodriguez put up six blocks (one solo, five assists), while contributing seven kills on 11 swings without committing an attack error to hit a sizzling .636.

USC kicked off the first set on a 5-2 run before Long Beach State turned the tables on the Trojans after the Beach scored four straight points to take a 6-5 edge. `SC fought back and regained the lead, but it was short-lived after DeFalco tallied back-to-back aces to even the score at 13-all.

The Beach took a 17-15 lead as USC called a timeout, before Long Beach State forced another Trojans’ break in action after going up 23-19. From there, the 49ers finished things off and went on to win the first set, 25-22.

The second set was a back-and-forth affair. With USC leading 7-6, Long Beach State went on a 4-1 run to turn their one-point deficit into a four-point lead (11-7). The Beach held a four-point lead as they owned a 20-16 advantage, however, USC would chip away at their lead and eventually even the score at 22-22.

“I think that when we lost that second set, the feeling was that we thought `SC played well and we wanted to give them credit for that, but we also felt that there were a lot of point scoring opportunities where we didn’t convert,” Knipe explained. “So the focus was to clean up our convert situation in transition and slow things down, and the guys responded very nicely in that third set.”

The Beach led the entire third set as they started off the frame on a 7-2 run forcing an early USC timeout. Following the break in action, the Trojans pulled within two (7-5), but were unable to come any closer as Long Beach State opened up an eight-point advantage (16-8).

LBSU extended its lead to nine (23-14) and was just two points away from winning the match, when the Trojans began to rally. After USC scored four consecutive points to make it a five-point game (23-18), LBSU called a timeout to regroup. The break in action was just what the Beach needed as they came back and put the set away, 25-18.

The fourth set was a battle throughout as the two teams fought through 11 ties and three lead changes. The final tie of the frame saw the Trojans even the score at 22-all before the Beach got a huge ace from Eric Ensing who came off the bench as served them to match point (24-22), before LBSU put the game away 25-23.

Lucas Yoder led USC with 23 kills, while adding six figs and two assists, while Gert Lisha dished out 49 assists and half a dozen digs. Matt Douglas posted 12 digs on defense for the Trojans.

In addition to the Long Beach State-UC Irvine match on Thursday, the Beach will also host the semifinal match between No. 2 seed BYU and the winner of the No. 6 seed Pepperdine-No. 3 seed Hawaii match at 5 p.m. at the Pyramid.

Long Beach State, the tourney’s top seed, improved to 25-3 on the year and now will host No. 5 UC Irvine on Thursday (April 20) in an MPSF semifinal match.

Eighth-seeded USC ended its season with a 14-14 mark. The Trojans doubled their win total from 2016 and advanced to the MPSF tourney after a year’s hiatus.

Connor Inlow added 9 kills (hitting .750) for USC, while Andy Benesh had 8 kills and Christopher Orenic had 7 kills off the bench. Matt Douglas had 12 digs and Blake Markland came off the bnech to get 9 digs.

TJ DeFalco and Kyle Ensing led Long Beach State with 12 kills each, while Bryce Yould and Andrew Whitt each added 9 kills. Amir Lugo-Rodriguez had 6 blocks, while Andrew Sato had 15 digs and Josh Tuaniga had 9 digs. DeFalco also had 4 aces.

Long Beach State ran off 4 consecutive points to go up 18-15 in the first set and USC couldn’t catch up despite hitting .394. USC trailed most of the second set and was behind 21-17 before catching the 49ers at 22-22, passing them at 24-23 and then scoring the set’s final 2 points on a Gianluca Grasso kill and an LBSU hitting error (Troy had 19 digs in the set). USC fell behind 7-2 in the third set and the Trojans could never get closer than 2 points the rest of the way as LBSU served 4 aces. Long Beach State went on a 3-point run to build a 14-11 edge in the fourth set and was up 21-17 before USC caught up at 22-22, but the 49ers restored order on a USC hitting error and then a LBSU ace, all the edge it needed to finish out the match.

This was the final match for USC seniors Yoder, Benesh, Orenic, Vinnie Rios and Michael Mullahey.