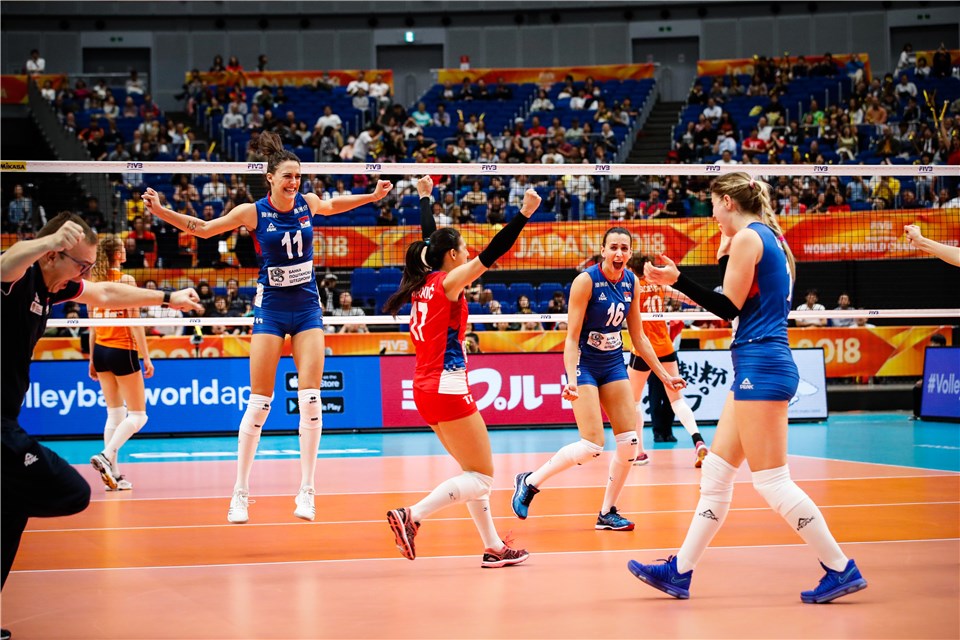 Serbia was back to full strength on Friday and rode a 29-point effort by star opposite Tijana Boskovic to a four-set win over the Netherlands to earn a spot in the Saturday's championship match. Current Photo via FIVB

Meanwhile, Italy will have a chance to earn its first World Championships title since 2002 after besting two-time title winner and 2014 runnerup China (1982, 1986) in five sets on Friday.

“This is our biggest success in the World Championships in Serbian volleyball history,” coach Zoran Terzic said. “It was our dream. Now we need to sleep a little more and do our best tomorrow. It will be a difficult match. The pressure was big. We did our best. It doesn’t matter if it is Italy or China in the final. The styles are a bit different, but it doesn’t matter to us.”

The Serbs avenged their Oct. 11 loss via sweep behind a 29-point effort by opposite Tijana Boskovic. The opposite, which missed that earlier meeting due to injury, notched a match-high 25 kills, three blocks and an ace. Brankica Mihajlovic added 23 points (21 kills, 1 block, 1 ace), while Milena Rasic turned in 12 points (9 kills, 3 blocks). Stefana Veljkovic added three more blocks in her seven-point effort.

Lonneke Sloetjes piled up 23 points for the Dutch on 20 kills, two aces and a block but it was not enough. Ann Bujs added 15 points, all on putdowns, while Maret Balkestein-Grothues (8) and Nicole Koolhaas (7) followed, serving up two aces apiece. Koolhaas notched four points in Set 2 after entering as a substitute for Juliet Lohuis and tacked on three more in the final two stanzas as a starter. Celeste Plak played only as a substitute and did not score in the match.

Serbia overcame 28 miscues with a 66-53 advantage in kills and an 11-4 edge in blocks. The Dutch led the way at the service line, besting the Serbs 7-4 in aces.

Serbia led Set 1 nearly throughout, going up 8-6 early and boosting its advantage to 13-10 and then 16-12 at the second technical timeout. Mihajlovic and Veljkovic notched kills to boost the edged to 23-19, but Sloetjes had her team back within two at 23-21. A kill and a block by Boskovic, her sixth and seventh points of the stanza, sealed the Serbian win at 25-22.

The Dutch carried the momentum into Set 3 and built a 9-5 advantage. Serbia called timeout and rallied with a 8-4 run to grab the lead at 13-12. A Rasic serving error put the Netherlands back up at 16-15, but a Boskovic putaway capped a 5-1 run which put the Serbs in control at 20-17. The Dutch called timeout, but couldn’t salvage the set, which ended on a Boskovic kill at 25-19.

It was 8-3 Serbia in Set 4 before the Dutch countered with five in a row en route to a 12-11 lead of its own. A block by Mihajlovic made it 15-12 Serbia, but the Netherlands did not give up, stuffing a Boskovic attempt to even the score at 19. The teams were level against 23 all after a Koolhaas block on Boskovic. Serbia went to Mihajlovic first for a tip and then for the final termination to close out the night at 25-23.

“Serbia is one of the best teams in the world,” Netherlands coach Jamie Morrison said. “I’m proud of my team’s fight. We were not consistent enough today. There were some four or five-point stretches that cost us. We are disappointed. It hurts but we have to move on and try to get the bronze medal tomorrow.”

"Patience was the key to our success", explains Captain #10 Maja Ognjenovic after Serbia's🇷🇸 victory in the semifinal against Netherlands🇳🇱 @Volleybaldames!

We are in the finals of the World championship! 🇷🇸