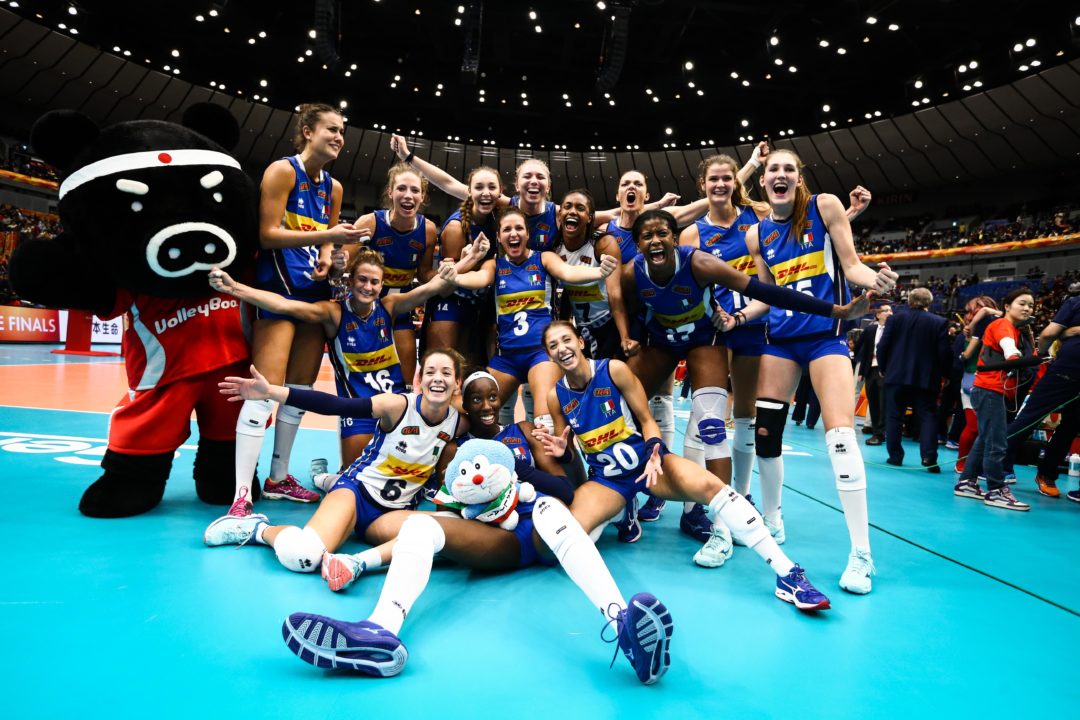 Paola Egonu piled up a tournament scoring record 45 points (39 kills, 5 aces and a block) and Italy bested China in kills and aces in a five-set win to earn its first World Championships finals berth since 2002.  Current Photo via FIVB

Italy will have a chance to earn its first World Championships title since 2002 after besting two-time title winner and 2014 runnerup China (1982, 1986) in five sets on Friday.

The Italians, which finished fourth in 2014, will meet Serbia, which was back to full strength on Friday and rode a 29-point effort by star opposite Tijana Boskovic to a four-set win over the Netherlands to earn a spot in the Saturday’s championship match. Serbia’s best Worlds finish to date was a bronze medal in 2006.

“It was really a fierce match,” Italian captain Chirichella said. “China gave us troubles. We were able to execute our attacks in the end. Our team is a little crazy, but we can execute. The fact we are young is not important. Losing the fourth set was tough, but in this match we were going point by point. We took it as part of the battle and looked at the fifth set as another match beginning.”

The decisive fifth set saw China up 5-4 after reception woes for Italy. The Italians rebounded to take an 8-7 lead at the changeover. Ting gave China an 11-10 advantage with a block, but an Egonu putaway, a block by Cristina Chirichella and an Egonu ace had the Italians at match point at 14-12. China tied it up at 14 and Egonu took over from there, delivering three kills over the final four points to put her team into the finals. Egonu did misfire on match-point at 15-14, but recovered with the final two blows.

“I am happy for the great opportunity to play in the final,” Italian coach David Mazzanti said. “It was a tough match. It hurt to lose the fourth set. I told the players before the fifth set how to adapt to Zhu Ting‘s play. Our players were very aroused after the fourth set, so you can’t give them too much information at that point. Before the match I didn’t say much. We have players who are rich in emotion and I don’t want to make them more emotional unnecessarily. We beat China once last year and that gave us confidence against them.”

Among six points in Set 1, Egonu notched a kill and a block to put Italy up 20-12. A Danesi stuff and Sylla tip shot put the Italians on the hill at 24-17 and Chirichella wrapped up the win two points later.

China led by as many as three in Set 2 at 20-17. Italy scored two in a row, including a Sylla putaway, to narrow the gap to one at 20-19, but a Ting kill and back-to-back aces by Hu Mingyuan evened the match at a set apiece with the 25-21 China win.

China built a slight 8-6 edge in Set 4, but a stuff by Lucia Bosetti had the Italians even at 13. Zhu Ting led the Chinese to an 18-15 advantage, but Egonu countered to give Italy a 20-19 lead. Danesi served up an ace to make it 22-19, but China would not go away easily, tying it up at 23. Italy called timeout, but Egonu was too strong on the next hitting attempt and China had a shot at the set at 24-23. A Zhang miscue gave Italy a try of its own at 25-24. The teams traded points with Zhu giving China another shot at 29-28 and Sylla answering. A challenge was upheld for the final Chinese point at 31-29.

“In the end we lost an excellent match,” China coach Lang Ping said. “Our players played very hard. We have many players with potential and need them to play to a higher level. We will do our best tomorrow.”

China🇨🇳 and Italy🇮🇹@Federvolley delivered as dramatic semifinal as any volleyball fan could have dreamt of! Italy🇮🇹 claimed the victory after a thrilling five-setter!