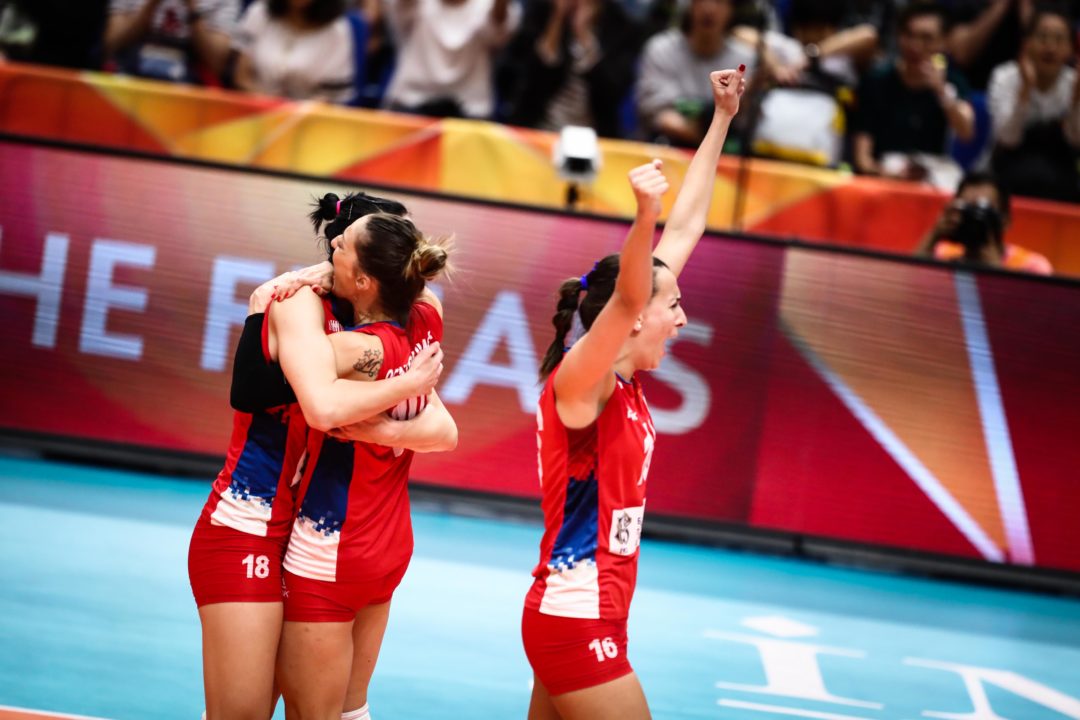 What was already a history making showing for Serbia, got that much sweeter to the tune of a five-set comeback win over Italy and the nation's first ever FIVB Women's World Championships title. Serbia had never finished higher than third, meanwhile Italy claims its second ever medal following a gold in 2002. Current Photo via FIVB

What was already a history making showing for Serbia, got that much sweeter to the tune of a five-set comeback win and the nation’s first ever FIVB Women’s World Championships title.

A 33-point outing by 19-year old superstar Paola Egonu was not enough to carry the Italians as all six Serbian starters scored six or more points.

With tears of joy, Serbia's 🇷🇸 @ossrb #10 Maja Ognjenovic underlines it's a "historic" achievement for them and praises Italy 🇮🇹 @Federvolley because "they fought very well" at a superb #FIVBWomensWCH final.

Tijana Boskovic made good on more than half of her 43 offensive swings, turning in 23 kills, to go with two aces and a block, for a 26-point tally. Brankica Mihajlovic added 18 kills (in 35 swings) and a block. Milena Rasic starred at the net with three blocks and seven kills. Stefana Veljkovic (9), Maja Ognjenovic (8) and Bianka Busa (6) followed. Ognjenovic served up two aces and added two blocks, while Busa accounted for two stuffs. Serbia used just one substitute in the match, Jovana Stevanovic, who came in briefly in Set 5. Boskovic was strong in the three Serbian set wins with seven points each in Sets 2 and 4 and six in the finale.

Italy, meanwhile, followed Egonu’s lead as the teenager piled up 30 kills, two blocks and an ace for 33 total points. Lucia Bosetti (14), Miryam Sylla (10) and Anna Danesi (9) rounded out the Italian attack. Bosetti turned in 12 kills and two blocks, while Sylla added eight putaways. Danesi chimed in with six putdowns and two stuffs. Elena Pietrini saw brief action in Set 2 and Carlotta Cambi came in to serve in each set, but the team otherwise relied on its starting six.

The decisive fifth set was a battle throughout. Boskovic notched an ace to give Serbia a slight 4-3 edge. Italy countered with a 4-1 run, including a Sylla tool of the block. Egonu put the Italians up 8-7 at the changeover, but Boskovic turned in a trio of kills and Mihajlovic stood strong at the net to give Serbia a 13-11 advantage. Ognjenovic gave the Serbs their first match point try at 14-12 and the team converted to claim gold.

Here's a key moment for Serbia 🇷🇸 @ossrb as they grabbed the lead over Italy 🇮🇹 @Federvolley and never let it go! An unbelievable dig by #1 Bianka Busa and then the thunder from #18 Tijana Boskovic @cotiii18 🌩#FIVBWomensWCH #volleyball #volleyballWCHs pic.twitter.com/pOEan8yIGo

Italy built a 7-3 lead in the opening stanza and went up by four at 16-12 as Boskovic misfired on a serve ahead of the second technical timeout. The Italians kept rolling winning the set on a Sylla putaway.

An ace by Bsokovic put Serbia on top 8-6 in Set 2 and Busa added a perfect serve of her own to give the team an 11-7 edge. Boskovic took control offensively and guided the team to a 20-12 advantage. Mihajlovic tooled the block to give the team a set-point try at 24-14 and converted the following play as well to even the match.

Set 3 was a back and forth affair. Italy led by as many as three at 16-13, but Serbia tied it up at 18 on a stuff by Ognjenovic and took the lead at 19-18 on a Mihajlovic putaway. Italy leveled the score at 21 and went up 23-22 as Danesi planted a kill. A Sylla block and Egonu kill sealed the 25-23 Italian victory. Egonu racked up 12 points in the win.

Serbia countered in Set 4, jumping ahead 8-2 as Boskovic poured on the offense. Errors kept Italy in it, narrowing the gap to one at 9-8, but the Serbs boasted a 16-11 advantage at the second technical timeout. A kill by Boskovic, a block by Ognjenovic and an Italian miscue pushed Serbia up 24-19 on the brink of a fifth set. In the end, Egonu served long and clinched the 25-19 win.

Was there a better way to bring #FIVBWomensWCH to an end? Probably not! A magnificent five-setter between Serbia 🇷🇸 @ossrb and Italy 🇮🇹 @Federvolley 🔝

Serbia won the gold medal and here are the highlights 👇

Italy was seeking its first title since 2002. Serbia’s previous best finish was a bronze medal in 2006.

Italy went 9-0 through the first two rounds and posted a 1-1 effort in Round, falling to Serbia in four sets. Italy edged China in five sets in Friday’s semifinals.

Serbia went 7-2 through the first two rounds, dropping their final two matches. The team bounced back with wins over Japan and Italy in Round 3 and bested the Netherlands in four sets in Friday’s semifinals.