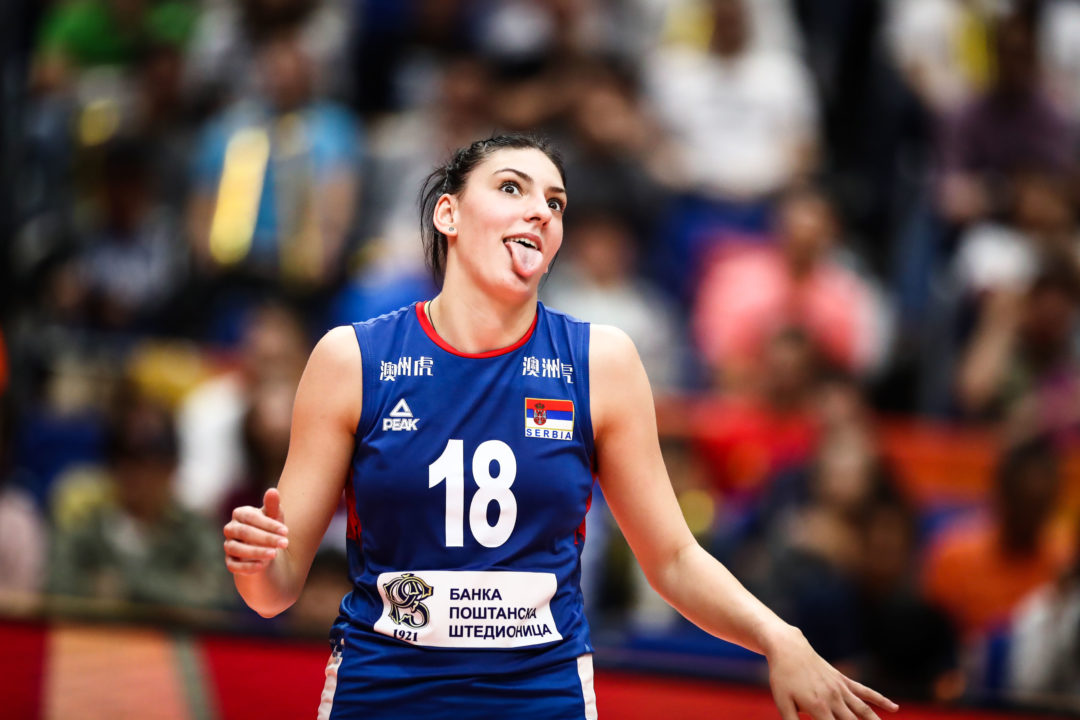 This is what my face looked like while trying to pick the outcome of the match between Serbia and Italy. Current Photo via FIVB

After a whirlwind semi-finals round at the 2018 FIVB World Championships, including a 45-point effort from Italian teenager Paola Egonu that overshadowed an incredibly-dramatic match, the medal matches are now set.

More Time Zones down below.

The right two teams made it to the championship match. In spite of a few hiccups for both teams in matches that didn’t mean much, when going full-bore and with full motivation, both squads have looked unbeatable.

Serbia beat Italy in the last match of the Final 6, but that was a scenario where there was effectively nothing to be earned. Italy, for example, didn’t p lay Myriam Sylla in that match, instead using it as an opportunity for rising star Elena Pietrini to get some experience.

Italy did win the last meaningful match, in preliminary play at the Nations League tournament, pretty easily. Serbia, however, was without Brankica Mihajlovic.

So, with the youth of Italy, and how quickly they’re improving, there aren’t really any good historical data points to determine the outcome here.

Are Myriam Sylla and Paola Egonu ready to match up toe-to-toe against a pair like Mihajlovic and Tijana Boskovic? In most scenarios, I’d be inclined to say yes; but in a World Championship final, that’s not so clear-cut. Italy’s middles are playing out-of-their-minds, but Serbia’s Milena Rasic had 8 blocks against Italy in the Nations League matchup.

Monica Gennaro has played lights-out in the tournament, and will probably be the best libero when all is said-and-done. In spite of Egonu’s weakness there, the Italians have been able to cover for their young star and have received the better of the two teams in the tournament (fewer errors, higher excellents %).

And it’s not as if the Italians don’t have experience. In spite of the youth of Sylla and Egonu, everywhere else on the court the team is a veteran squad, with the captain Chiricella and Lucia Bosetti and de Gennaro counted among them.

There’s no ‘right’ answer here. This is all about instinct. Which team is going to show up when they need to. I like Serbia. But this could be an instant-classic. I’ll predict a score, but my real prediction is this: this year’s gold medal match will live on through history propped up as one of the great gold medal matches we’ll ever see in this tournament.

In both matches, the losing team could point to the failure of their coaches to make bold lineup decisions with young players as a reason for their downfall. For the Chinese, that was the continued belief by head coach Lang Ping that 18-year old Li Yingying isn’t ready to take a leading role at a tournament of this magnitude. She played all 5 sets, but in 3 of those, she was forced to start on the bench before coming on in relief of Zhang Changning Zhang, who returned from several injuries for this tournament. While Li didn’t play her best, she did hit 5/17, and add 1 block and 2 aces for 8 points. Changnin hit just 1-for-10 and added no peripheral offensive stats.

Zhang is clearly the better service receiver of the two – she had 8 excellent receipts in 21 attempts on Saturday – but the serve isn’t where the Italians were shredding the Chinese. The difference in the match was more concentrated on the Italians’ offensive power, and the Chinese inability to match them blow-for-blow.

In the other matchup, Dutch coach Jamie Morrison, who has proven a master at this point in using his substitutes to push his team to a new program-best position at the World Championships, became suddenly conservative on Saturday. 22-year old Celeste Plak received only spot service duties for the Dutch, after providing a key offensive spark in other matches in the tournament so far, with Morrison preferring to stick with the veteran Anne Buijs (26) and the captain Maret Balkestein-Grothues (30) in the unprecedented waters for the Dutch team. While those two didn’t play poorly (21 kills, 44% hitting), the team as a whole really needed an injection of offense (38% hitting as a group) in the match as much as anything.

What we saw in the Nations League, where China also lost in the semi-finals, was that Lang Ping took the gloves off her young star Li Yingying, and that helped lift them to an easy bronze medal win.

We’d expect that to happen again here, though maybe not quite as easy, as the Dutch have played well all tournament.