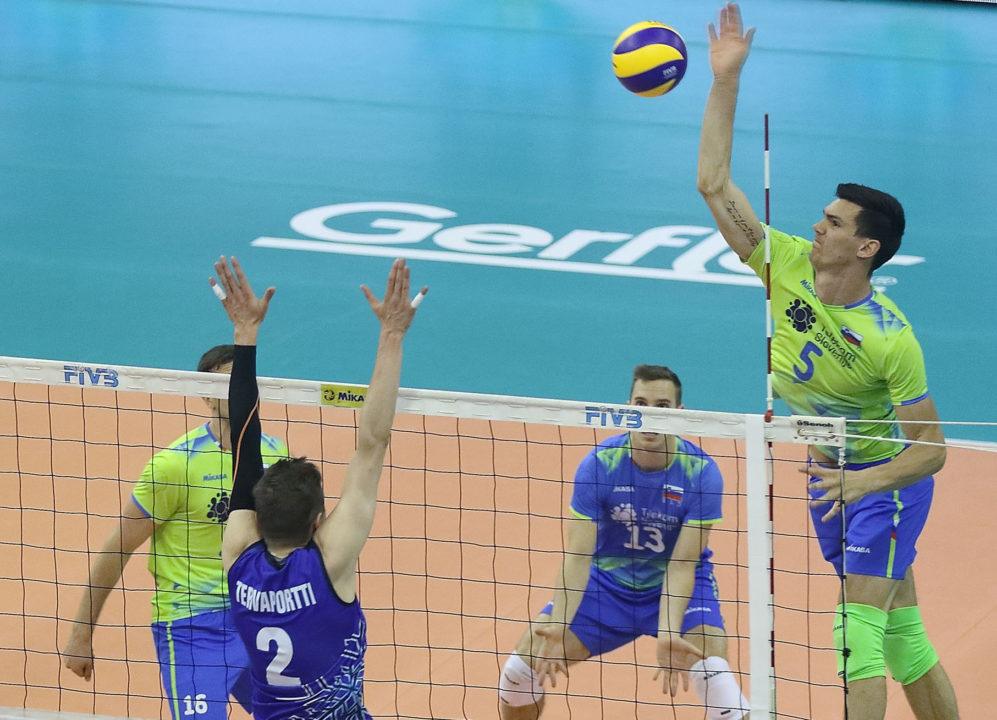 Slovenia stayed atop Pool H2 with a sweep of Finland Saturday morning, while Portugal matched the Slovenians six points with a four-set win over Egypt. Current Photo via FIVB

Slovenia stayed atop Pool H2 with a sweep of Finland Saturday morning, while Portugal matched the Slovenians six points with a four-set win over Egypt.

The teams are set to fight it out for the H2 lead on Sunday.

Slovenia led 16-12 at the second technical timeout of Set 1 and carried on to the 25-21 win despite a tie at 17-all after a Sauli Sinkkonen kill. Finland surged ahead 8-4 in Set 2, but the teams were soon tied at 12. A back-and-forth battle ensued, but Slovenia broke the final tie at 22 with a pair of Tine Urnaut putaways. Slovenia boasted a 16-13 lead at the second break of Set 3, and held on for the 25-22 win, which came on a Finnish service error.

“Today we played better than yesterday; some players are not in good condition because they have problem with stomach,” Slovenian coach Slobodan Kovac said. “Players who were on the court played very good and generally our service was very strong, block and reception were very good.”

“It’s a pity because we had some occasion to win but we didn’t use them especially in the second set and we lost some easy points,” Finland coach Sammelvuo Tuomas said.

Portugal served up 12 aces in a four-set win over Egypt on Saturday to remain atop the pool with Slovenia at 2-0 (6 points).

The Portuguese also posted 56 kills and nine blocks in the match. Egypt managed 43 kills and 11 blocks, but just three aces.

The home side led throughout the first set, building an early three point advantage and taking the stanza 25-22 on a kill by Ahmed Abdelhay. Portugal raced ahead 12-8 and 20-13 before evening the match with a 25-17 win. The Portuguese led 16-7 midway through Set 3 and never let up in a 25-15 victory. Portugal went up 8-4 in Set 4 and maintained the edge to close out the win.