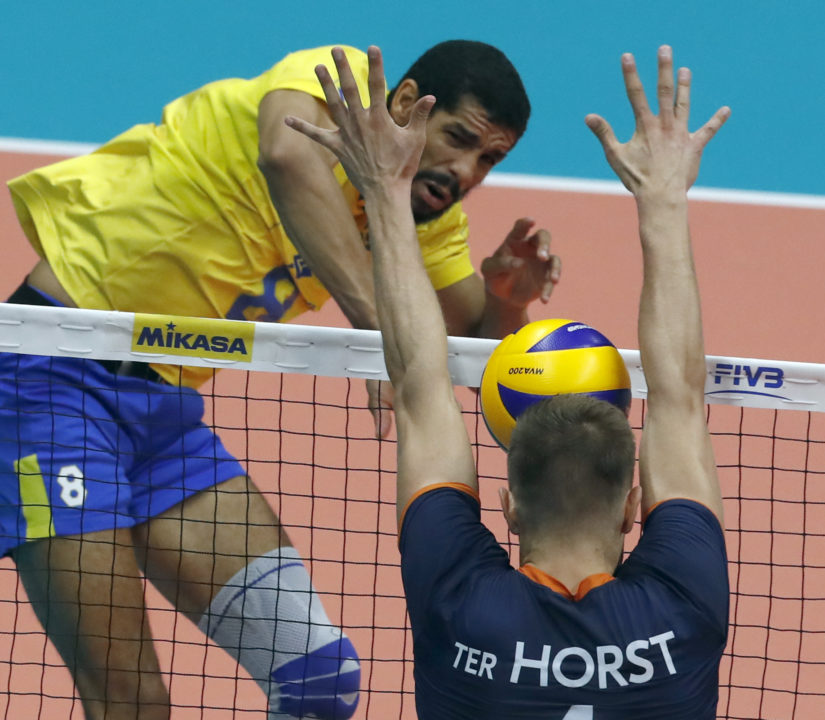 Wallace De Souza of Brazil and Chuan Jiang of China scored 87 points apiece in the preliminary round of the FIVB Men's World Championships to lead the field. Here's a look at the other statistical leaders in Round 1.  Current Photo via FIVB

As the second phase of the FIVB Men’s World Championships is set to begin on Friday, it is time to a look back at the numbers from the opening round and top players in each statistical category.

Wallace De Souza of Brazil and Chuan Jiang of China scored 87 points apiece to lead the field. DeSouza pounded down 81 kills and added four blocks and two aces, while Jiang chimed in with 73 kills, seven stuffs and seven perfect serves.

Rounding out the top 10 were teams from seven different nations. Canada placed two players – John Gordon Perrin (81) and Nicholas Hoag (73) among the top group as did Slovenia – Tine Urnaut (82) and Mitja Gasparini (75). American Matt Anderson placed in a three-way tie for ninth with 73 scores (61 kills, five blocks and seven aces).

Of the Top 11 scorers, Jiang, Cuba’s Miguel David Gutierrez and Puerto Rico’s Maurice Torres will not be moving on in the competition as their teams failed to reach the second round.

Of the top scorers, four also are among the 10 most efficient hitters in the competition: Ivan Zaytsev (Italy), Anderson, DeSouza and Facundo Conte (Argentina).

Zaytsev has made good on 62.75 percent of his attempts (64 kills, 8 faults, 30 shots in 102 attempts). The United States is the only team with multiple players on the Top 10 list with Taylor Sander (57.78 percent) joining Anderson.

Three of the Top 11 blocks hailed from China, while Belgium’s Simon Van De Voorde led that category far and away with 1.11 stuffs per set. Next on the list was Cuba’s Roamy Raul Alonso (0.74).

In addition to the title of most efficient hitter, Italy’s Zaytsev also led all players in serving with 0.71 aces per set. He was one of three players, alongside Sander and Gasparini to serve up 12 aces, but did so in far fewer attempts.

Both Italy and the USA put two players among the top server list.

Australia’s Harrison Peacock was the top setter in the opening round, dishing out 11.85 assists per set to push the Volleyroos through to Round 2. American Micah Christenson was the only other setter to average double-digit assists per set (10.55).

The title of top defender, or best digger, went to Canada’s Steven Marshall, who notched 45 digs, 2.50 per set as the Canadians went 3-2.

And no team would be complete without its best serve receiver. The United States held down the top two spots in the category, while Slovenia, and Belgium also managed two spots among the Top 10.