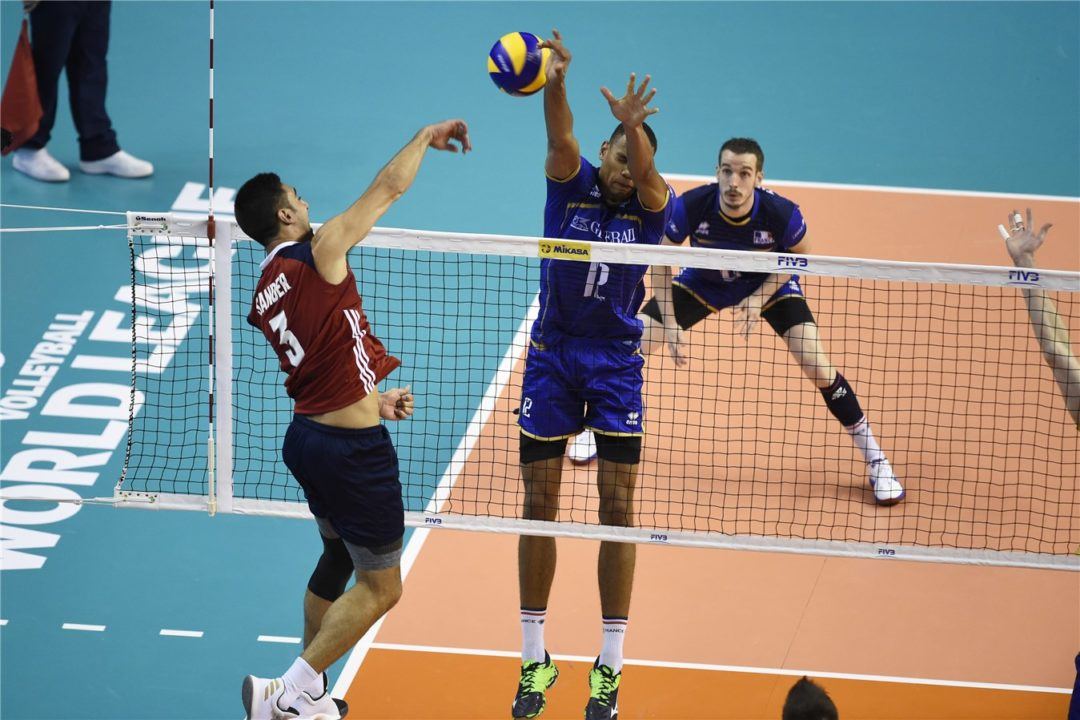 The United States couldn't keep the win streak going as France took them down in the Pool F1 finale to remain unbeaten. Current Photo via FIVB

The battle for supremacy in Pool F1 went France’s way as they remained undefeated by ending the United States’ two-match winning streak. With the win, France clinches a spot in The Final Six in a few weeks while the U.S. sits below the line needed but is in much better shape after last week’s 0-3 start.

In a match of winless opponents in Pool F1, it was Russia coming down from two sets to one for a much needed ‘W’. They now put themselves in a position similar to the U.S. while things look sour for Italy.

France tested their undefeated mark in World League play against the Americans that had figured some things out after winning six straight sets over Italy and Russia. France hadn’t beaten the Americans in three years as the U.S. won a four-setter in the World League last year and won in four in the 2016 Rio Olympic preliminary round.

USA had the early edge, leading 14-13 in set one. An 8-1 run by France put them up 21-15 with a bit of a cushion. That cushion would be tested as the U.S. scored three consecutively before a France timeout. From that point on, they would take four of six, winning the set on a Nicolas Le Goff block.

France started set two the same way they ended the first – with a 4-2 run. The United States countered with four in a row as they never lost the lead in the set from there. In total, they would end the set on a 23-14 run to win it 25-18.

Again France got the early jump in set three with a 15-11 advantage. A U.S. block by Jeffrey Jendryk and Taylor Sander pulled them within one as part of a 4-1 spurt. At 20-18, Stephen Boyer crossed an attack that looked as if it barely missed the opposite sideline, but on video review touched a sliver of the white. It was Boyer’s second straight kill and was supplemented by one of two Thibault Rossard aces on the next play. The swing in points was enough for France to pull ahead 24-20 as the U.S. would make things interesting from there. Jendryk, who had seven points, recorded a kill out of the middle and then Boyer put one wide right of the playing court. At 24-22, again Boyer got the feed and again went for the right line. It was called out, but on further review again the ball just nudged the line for France to take a 25-22 third set win and a 2-1 lead. For Boyer, it was one of his team-best 19 points.

In the fourth, France pulled ahead 18-16 in what was a constantly close set where it felt as if the U.S. was always chasing France’s lead. France finally snagged a few moments of back-to-back points later in the set as their lead extended out to as much as six at 22-16 behind a 4-0 run. The Americans never gave up, battling to 21 points, but it wasn’t enough as Boyer struck one off the hands of Sander for the final nail in the coffin.

USA out-spiked France 51-44 in the match behind Sander’s 25 points and Ben Patch‘s 16.. Astoundingly, the U.S. also out-blocked France by the wide margin of 11-2. The difference for France was their serve (six aces to three for USA) and 18 less attack errors on a more efficient offensive match.

The U.S. finishes the weekend with a loss, but overall it was a good one for the Americans. After going 0-3 last week, the U.S. salvaged this week with sweeps of both Italy and Russia. They finish second in Pool F1 with a 2-1 record and six points, as the strong week also moved them up from 12th (where they started the week) to a spot near the middle where, although on the outside-looking in, puts them in contention to push for the top six. Next week the U.S. will preside in Pool H1 with an opportunity to face three teams all within striking distance of each other near the middle of the Group 1 table: Iran, Russia and Poland.

France on the other hand is now a lock to appear in The Final Six as they clinched a spot with a win. They sit at 6-0 and have squeezed out the maximum 18 points from those matches. As they did last week, France wins their Pool again in week two. They’ll close out pool play next week in I1 where they’ll rematch Italy and then take on Canada and Belgium. Already, France looks ready to improve on the third place medal from a year ago at World League.

Essentially a third place match for Pool F1 and a chance to get one victory from the weekend, this was the first meeting between Russia and Italy in the World League since 2013.

Set one began as back-and-forth as the entire set would last with Russia holding a 16-15 lead. Italy had their own spurt though and scored five straight. Again Russia responded and tightened the set up when a back row attack from Giulio Sabbi was blocked by a Russian triple block, mainly Ilia Vlasov, who had three blocks and ten points, to even the set at 24. The set continued, looking as if it would never end, working its way into the 30s. Finally, Italy broke free of being tied or trailing to set point, by forcing one of their own. After Russia knotted the set up again, one of Iacopo Botto‘s 23 points came in the form of a kill. That was paired with a Davide Candellaro block for Italy to finally win the set at 33-31

Italy led 18-14 in set two before Russia made their move, creeping back into the game until they evened it at 21. With the set tied at 23, Dmitry Volkov, who led Russia with 19 points, recorded a kill for a chance at set point. A dig made by Sergey Antipkin as he fell onto the court provided Russia with the lone offensive attack they needed after Maxim Zhigalov hit a left-handed roll shot over the block and into no man’s land in the middle of the Italian defense to win the set 25-23. It was one of 16 points on the day for Zhigalov.

Italy countered in the third with an 11-8 start. They tacked on with the next five points for an eight-point lead that lasted until 20-12, when Russia began to make a run; eight of the next 11 points would go Russia’s way. After Italy experienced a similar collapse in set two, they were able to pull together at the end in set three and finish what they couldn’t in the prior game, taking it 25-21.

Set four had plenty of mini-runs, but overall it was all knotted up at 20-20 in the dying moments of the game. Italy snagged two straight, but Russia would win three of four, tying at 23 on a Volkov ace. The next two points saw Italy shoot itself in the foot as they had two attack errors, giving Russia the set 25-23 and forcing a decisive fifth.

After falling behind 5-4, Russia would take 10 of the next 13 to hold the 14-8 lead. The last two points of the run came on Ilyas Kurkaev blocks, who had three in the match to produce 10 total points. After a Russian serve error, Sabbi aced to make it 14-10. It would be Sabbi’s 31st and final point of the match, as his next serve traveled into the net for a Russian victory.

Italy out-spiked Russia 70-54 and won the ace battle, 12-8. However, Russia out-blocked Italy 10-4 and had 17 less attack errors than the Italian side.

The five-setter means both teams got something from the match. For Russia, they finish third in Pool F1 with the two points while Italy finishes fourth with just the one.

Russia owns a 2-4 record (1-2 both weeks) now in World League. They’re still in the bottom half of the standings, but with six points are right on the heels of race for The Final Six. Pool H1, as mentioned above, will have large implications on who makes the playoff round, as Russia’s counterparts in the Pool (Poland, USA, Iran) all have legit shots of making The Final Six.

The Italians now sit among the bottom two of the Group 1 table, but are close enough to the cutoff for The Final Six that two wins next week could give them a chance. Italy will be in Pool I1 next week though which will prove difficult to get a couple wins; they’ll open with France in a rematch of a four-set loss and follow it up against Belgium and Canada.