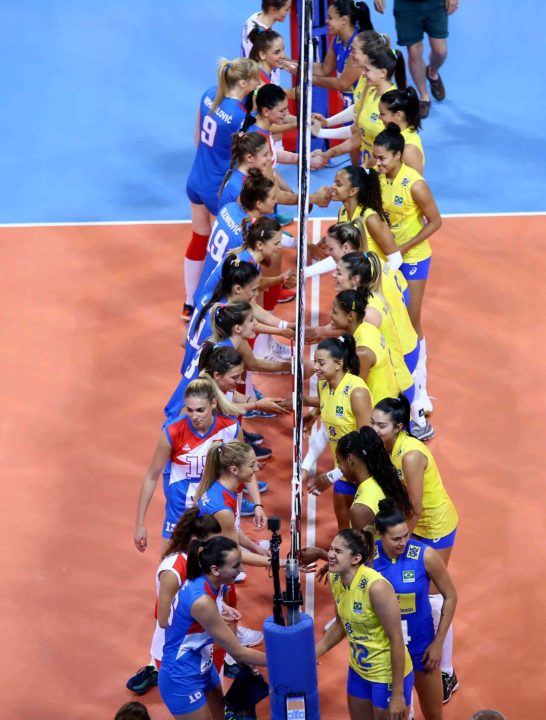 Serbia and Brazil face off for a spot in the 2017 FIVB World Grand Prix Finals. Archive Photo via FIVB

The top record in Group 1 takes on the best team from the 2016 edition as Serbia and Brazil face-off in the semifinals with a spot in the 2017 FIVB World Grand Prix Group 1 Championship on the line.

Serbia posted the top record in Group 1 pool play at 7-2 and followed it up with a 2-0 mark in the Final Six pool play, giving them an overall record of 9-2 – the best posting in Group 1. Dating back to last year’s Grand Prix, they’ve now won 13 of 15 in the event. No matter the result from here on out, Serbia will have a top-four finish for the first time since 2013 when they ended up in third place. They have higher aspirations though, as a win vs. Brazil would put them in the World Grand Prix championship match for the first time ever.

Brazil struggled early in the tournament as they hit 3-3, but have since recovered by winning four of five for an overall 7-4 record. They’re trying to peak at the right time as they are two wins away from defending their 2016 FIVB World Grand Prix championship and winning their fourth title in the past five World Grand Prix tournaments. In total, they’ve won the Grand Prix 11 times, which is five times more than any other nation.

Beyond the hoopla of the semifinals, this also serves as a rubber-match with Serbia sweeping Brazil on July 8 and Brazil reversing the result six days later. Brankica Mihajlovic led Serbia in their win with 23 points, while Natalia Pereira scored 16 points on spikes to spearhead Brazil’s victory in the second meeting.