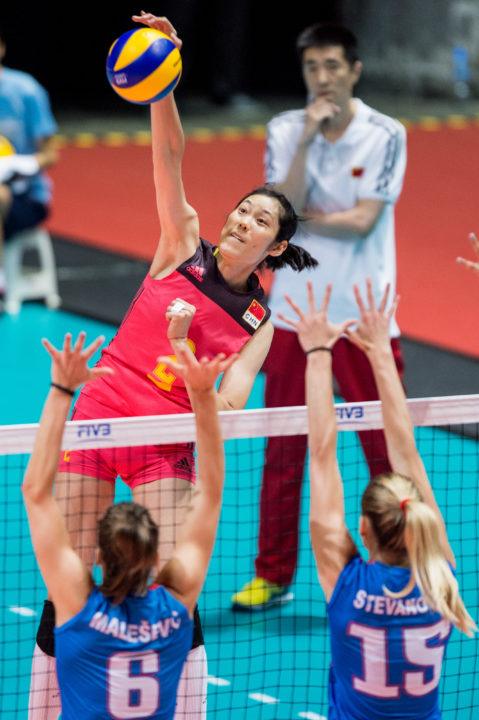 China faces Serbia for a bronze medal at the 2017 FIVB World Grand Prix in a rematch from last year's Olympic Gold-medal match. Archive Photo via FIVB

Beyond fighting for third-place, a bronze medal and a place on the podium, Serbia will look to avenge its loss in the gold-medal match from the 2016 Olympics. China will look for the same result after they won that meeting in Rio in four sets.

Serbia had been the top team up until the semifinal round at the 2017 World Grand Prix. They notched the top pool play mark of 7-2 before winning both Final Six pool stage matches, but the experience of Brazil paid off as Serbia dropped to 9-3 overall. Now they look to regroup and win their first medal since 2013, when they also finished third. They’ll look to ride a more balanced attack than they had in the semifinal round to do so, although they still will need a strong match from Tijana Boskovic, who netted 32 of the team’s 85 points.

China was rolling headed into the semifinals after a pair of wins in the Final Six pool stage. They couldn’t muster up the same result in front of a home crowd against Italy though, as they fell in four sets. Zhu Ting scored 21 points in that loss which was preceded by a 33 point effort. The Asian side needs her on her best for this one, as overall their record stands at 7-5. They’ll need eight wins to bring home their 10th medal in their nation’s history at the Grand Prix.

It’s sometimes hard to estimate who will get up for a third-place match after suffering a heart-breaking loss in the semifinals. That shouldn’t play into account for this one, as China has the home crowd to cheer them on while Serbia has revenge from the Olympics on their mind.