Argentina Advances Despite Loss to Japan; Italy Moves to 5-0 in Pool A 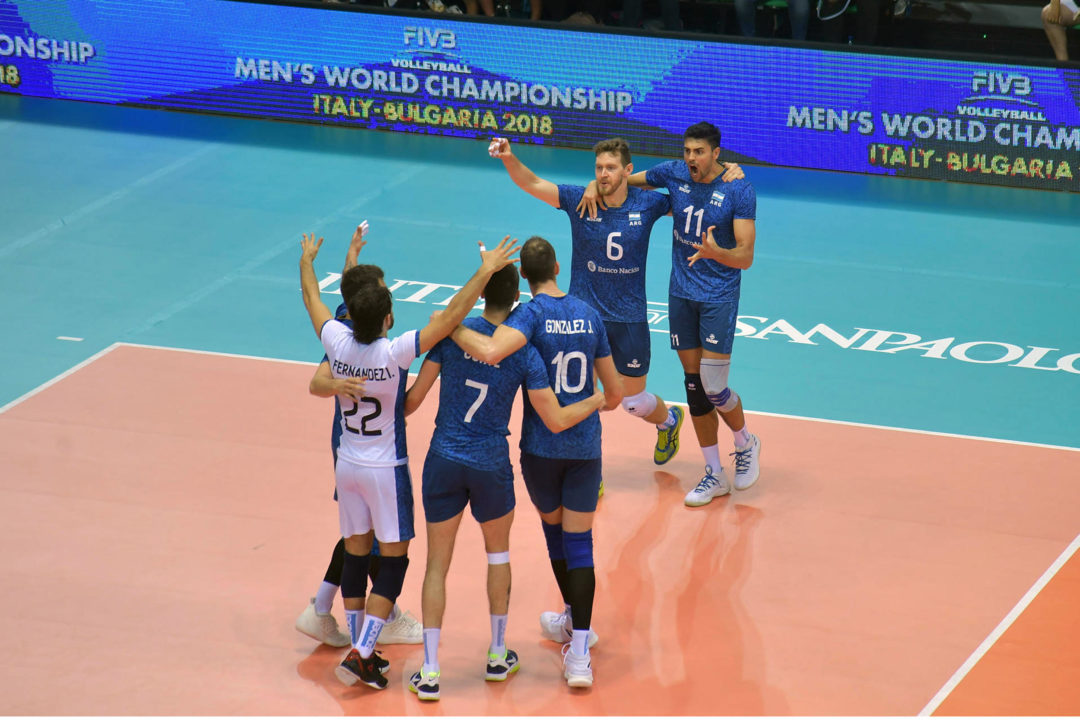 Japan defeated Argentina in five sets, but missed out on a spot in the second round on point totals (6-5) to the Argentines. The day's other match planted Italy firmly atop the group at 5-0 as the host nation edged Slovenia in four sets after dropping the opener.  Current Photo via FIVB

Japan defeated Argentina in five sets, but missed out on a spot in the second round on point totals (6-5) to the Argentines. Japan got the win that it needed, but failed to garner the three points it needed to get into the next round, trailing Argentina 6-5 in points.

The day’s other match planted Italy firmly atop the group at 5-0 as the host nation edged Slovenia in four sets after dropping the opener.

“I am happy because we reached our goal even if we lost the match,” Argentine top scorer Facundo Conte said. “Japan is very strong when it comes to their defense game and this was evident today. It will be very tough in Bulgaria, however we will try to achieve something more in this tournament.”

Conte threw down 33 points and Japan’s Yuji Nishida answered with 30 scores of his own in the two hour and 20 minutes battle. In the end, Japan boasted a two-point advantage in the match care of 23 Argentine errors (to 21 of its own).

Nishida had help from 21 points by Masahiro Yanagida, 16 from Tatsuya Fukuzawa and 11 from Akihiro Yamauchi in the victory. Nishida downed 27 kills, while Yanagida added 16 and Fukuzawa chipped in 14 putaways. Yanagida also came through  with four aces.

Conte managed a team-best 30 kills, two aces and a block. Sebastian Sole (14), Jose Gonzalez (11) and Christian Poglajen (9) rounded out the top scoring. Sole and Gonzalez turned in 12 and 10 kills respectively, while Poglajen did his scoring on nine putaways. Pablo Crer put up a team-best three blocks among five points.

Argentina boasted an 11-7 lead in blocks, countered by Japan’s 9-5 edge in aces. The difference came in the errors (23-21) as both teams managed 77 kills in the match.

Conte was a perfect 7-for-7 in kills in Set 2, lifting Argentina to one of its two needed victories at 25-20.

Japan led early in Set 3 before losing libero Taichiro Koga to a neck injury midway through the stanza as he flew over the LED boards. Argentina had the first try at the set but missed four opportunities, despite 12 Conte scores in the stanza. Japan earned two chances of its own, but couldn’t convert either. Poglajen finally ended the set at 32-30 to punch Argentina’s ticket to the next round.

It was a back and forth battle in Set 4 until Yanagida served up four points, including two aces, to force the decisive fifth set.

Japan led Set 5 at 9-7, only to see Argentina charge ahead at 12-10 on another Conte putdown. Yuki Ishikawa tacked on two points and Yanagida added an ace to set up a final block by Fukuzawa for the win.

“We played very well as a team, and it is sad we cannot go to the next round; it was anyway good to win, it is something we will take on for next year,” Nishida said.

“I am happy we finished Pool A undefeated which is fundamental for the rest of the tournament; we were good to play in an appropriate way at the different stages of the game,” Italian captain Ivan Zaytsev said. “Even in the first set when they played at a very high level, we did not get nervous and later we improved the quality of our performance.”

Zaytsev piled up 18 points, including team best tallies in sets 1, 2 and 4, and made up of 14 kills, three blocks and an ace. Osmany Juantorena (13), Daniele Mazzone (11) and Simone Anzani (11) also turned in double-digit point totals. Anzani put up a team-leading six blocks, while Mazone added three to go with seven putaways. Juantorena served up two of the team’s five aces and notched 11 kills. Gabriele Maruotti took over for Filippo Lanza in Set 3 and went on to score six points, all on kills.

Juantorena came through for Italy in the end of Set 2 and Anzani chipped in a block and a kill to knot the match at a set apiece at 25-19.

Italy jumped out to an 8-3 lead in Set 3 as Maroutti came in. The advantage stood at eight points at 18-10 and the team carried on from there to a 25-13 victory. A Mazzone ace and two blocks and a kill by Anzani capped the win. The Italians scored 11 points on kills, two on blocks and two on aces in the victory.

Set 4 was a one-point game at 12-11, but Italy was too much in the end, earning a match-point try off Zaytsev’s hand and clinching a perfect mark with a Anzani tip shot.

“It was a great experience to play in this sports hall with so many passionate fans,” Urnaut said. “Apart from the first set, today we did not perform very well when we had a few chances to play with good reception. And it was hard to develop a good side-out with the ball often far from the net. Italy deserved the victory.”