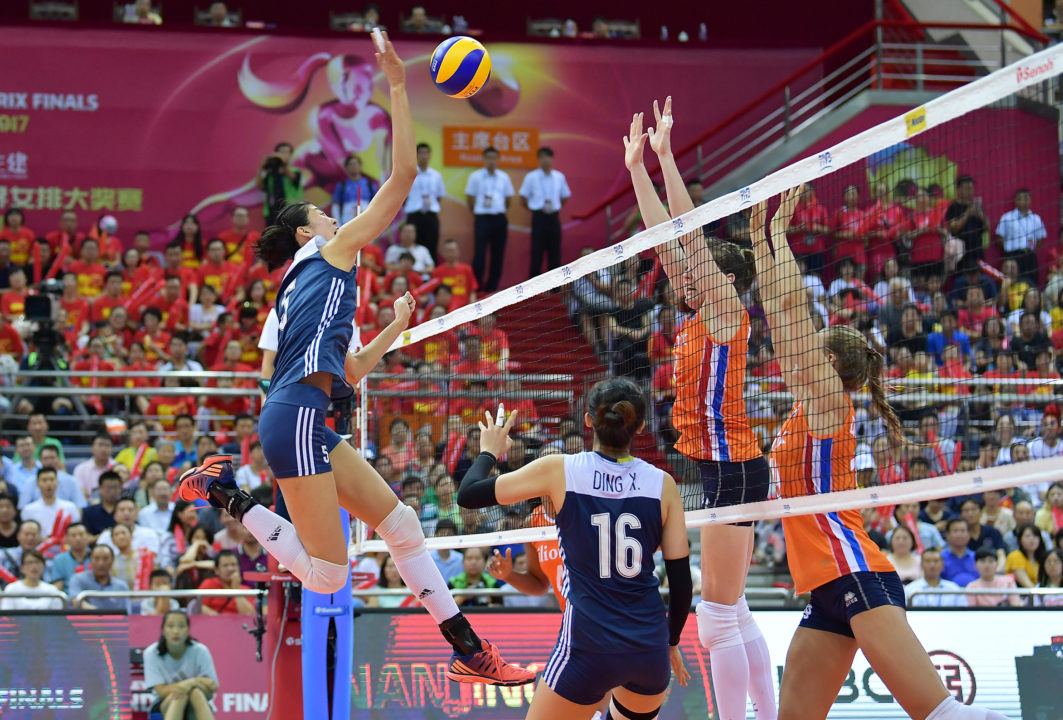 China knocked out Netherlands to win Pool J1 and allow Brazil to slide into the semifinals. Current Photo via FIVB

Although it was the second match of the day, China and Netherlands provided the day’s top match. The Dutch needed a victory to advance to the semifinals, while China was looking to lock down the pool victory. After five grueling sets, China emerged victorious in extra points in the fifth. The biggest winner was Brazil, who now moves on to the semifinal round with Netherlands eliminated.

In the opening match of the day, Serbia continued to flex its muscle as the top team in the tournament with a four set win over an Italian team that had won seven of eight matches. Both teams remain in the semifinal round, but now Serbia wins Pool K1 and garners an extra sum of money.

With the final four set, the matchups are as well. As the top team in Pool K1, Serbia faces Brazil, the second-place team in Pool J1. Serbia has the best overall record in the 2017 World Grand Prix, while Brazil is the defending-champion. The other match includes China, the host of the final four, taking on Italy.

Neither side relinquished an edge in attack, as both notched 50 kills. Where Serbia was better at blocking (11-8), Italy threw down more aces (7-4). The biggest difference came from six more Italian errors, as a dominant third-set for Italy swung some of the stats closer together.

Ana Bjelica started her first set in the fourth after that big loss for Serbia, as she did not appear in the set and only came on as a substitution in the first two. She still totaled 12 points (10 kills on 21 attempts, one block, one ace), and was critical in Serbia escaping the fourth and final set, 27-25.

The only Serbian with more points than Bjelica was Tijana Boškovic, who racked up 16 on 14 kills (27 attempts) and two blocks. Indre Sorokaite kept up and more for Italy, as she led the match with 22 points, with 19 coming from kills on 37 attempts. She also put together a match-high 15 digs in a losing effort.

“Italy put pressure on us and did a great job on defense,” Serbian captain Milena Rasic, who had three blocks in the match, told FIVB after the win. “I am glad that we topped the pool and it is time to think about the semifinal tomorrow.”

Serbia improves to 9-2 overall in the tournament as they now face Brazil in the semifinal round. For Italy, they advance to the final four as well, and still have won seven of nine matches as they sit at 7-4 overall. They may have the tougher semifinal task, as not only do they play a red-hot Chinese squad, but the match is also a home one for the Asian side.

In what was one of the most back-and-forth affairs of the entire 2017 FIVB World Grand Prix, China came out on top in front of a raucous home crowd for a five-set victory.

The first three sets alternated perfectly at 25-23 until Netherlands broke the trend with the match’s largest set victory at 25-20. That forced a fifth and decisive set, as the Dutch knew it was do-or-die mode. Just as the rest of the match was though, neither team could gain much of an edge in the final set. Eventually, behind Chinese captain Zhu Ting, China came out on top as Ting totaled 33 points (31 kills on 58 attempts and two blocks) and a team-high 16 digs.

Beyond Ting’s performance, China had three others with 11 or more points. Gong Xiangyu was tied for second on the team with 14 points and also added 15 digs. In a valiant effort from the Dutch’ perspective, five different players added 11 or more points with Nika Daalderop (22) and Celeste Plak (20) hitting the 20-point plateau.

The stat sheet was just as indicative about how tight the match was. Where Netherlands gained a slight edge in kills (75-73) and aces (8-5), China countered with more blocks (11-8) and less errors.

China now advances to the final four as hosts and get Italy in a match that features two teams that have been hot of late. For the Netherlands, there is no next match now, as their 2017 FIVB World Grand Prix is over with a top-six finish.