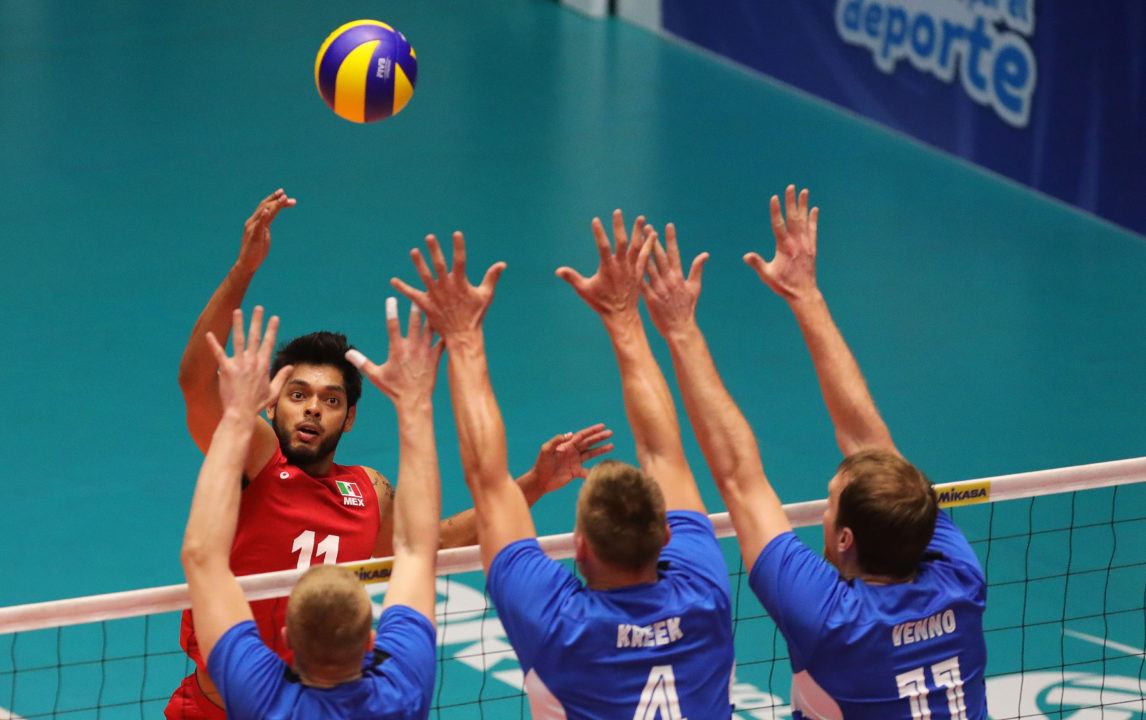 The Estonian block led them past home team Mexico for a finals berth in their first-ever World League appearance. Current Photo via FIVB

After a German thumping last weekend to end pool play, Spain recovered for a 3-0 win on Saturday in Group 3 (the 3rd tier of the tournament) semi-final action. There they will face Estonia – the surprising finalists in the group.

Estonia is ranked just 38th in the world by FIVB, which makes them the 3rd-lowest ranked team in Group 3. In spite of that, they rolled to a comfortable 3-0 sweep of world #19 Mexico in hostile territory on Saturday to advance to the final in their first-ever World League appearance.

It wasn’t a balanced attack for Spain, and the outcome didn’t look as easy as it appeared in the 3-0 scoreline, but Spain got their revenge on Germany with a 3-0 win in the early game on Saturday.

Andres Villena was the only Spaniard in double figures (and one of only 6 Spaniards to score at all in the match), but he came away with 22 points – including 20 kills on 34 attempts.

It was the captain Jorge Fernandez, however, that got the last laugh – who drove a ball down the middle to seal the 3rd set at 25-22: one of only 4 points for him in the match.

“We have played a very focused game, maybe we took a while to definitely start playing on the first set, but when we did it our best game showed up,” Fernandez said in a post-match interview. “After the first set, our confidence went through the roof and they had trouble following our pace. We had lost against them recently, but we didn’t play well that one time – We knew that if we played on a good level, we had our chances.”

“A vital part of this win was the way we prepared the match,” said his coach Fernando Munoz. “We were extremely ready for this semifinal; it was a process of several days thinking of it. We were very convinced we could win, and on a technical side we served very well. We could control them and now we have to wait for our rival, of course, but it will be very important to stay this strong mentally. It’s a gold medal match and the only goal is to win.”

Germany gave away an uncharacteristic 25 points to Spain in the 3-setter. While Germany has had some sloppy performances in this tournament, overall they’ve limited errors – including just 11 when the two played a week ago (where Spain gave up 31 points on errors). This time, the tables were turned with Germany giving away 25 points and Spain just 14.

For Germany coach Andrea Giani, though, this was a mere matter of attitude and effort.

“This was a semifinal and the difference was in the emotional area,” Giani said. “Sure, we weren’t comfortable throughout the game, but it’s important to keep playing. After the first set we played so bad, with a bad attitude, and when you play an important game like this one, attitude is vital. Spain were under on the first set, but they stayed there, always fighting. They played very well and now they’re on the final.”

Behind a 16-point game from Roberth Taht, World League debutantes Estonia advanced to the Group 3 final thanks to a 3-0 win over the home team Mexico on Saturday.

The outside hitter Taht was nearly matched by opposite Oliver Venno‘s 14 points to lead Estonia. The two combined for 30 points – 29 of which came on kills (out of 45 total for Estonia).

“We knew in advance that Mexico as the home team was going to have this support, so we were very focused to isolate from that. We also did very well on our blocking-defense game. Now with Spain, we know each other pretty well, and although we have defeated them before, tomorrow it will be completely different. They’re playing some really good volleyball – They beat Germany, that’s all there is to say. We have to play point by point, one by one as it’s going to be a tough final.”

An overwhelming block for the visitors carried the day – they beat Mexico in that category 8-2. That includes 4 alone from Andri Aganits – who atoned from an inefficient offensive performance (2-for-7) with strong defense.

Estonia had 4 players (with more than 1 attempt) who scored in over 50% of their swings, making a 52.94% success rate for the team as a whole.

Mexico’s lone player in double digits was Jorge Barajas, who had 11 on 10 kills and an ace. Estonia, in spite of a relatively easy win, still gave away 15 points on service errors, balanced by just 1 ace. Venno, especially, struggled with 5 errors of his own, and the team will have to clean that if they want to pull off a win on Sunday against the suddenly-stingy Spanish.

“I think we suffered a lot against their blockers, we couldn’t handle that and it was very difficult for us to score. They used that advantage and it clearly affected the game, but on the first and third set we were better and that has to be our starting point for tomorrow against Germany. And it’s always a pleasure to play at home in front of this amazing crowd, always supportive no matter the score or the final outcome of the game.”

While Mexico will face Germany on Sunday for 3rd place, Estonia looks forward to Spain in the championship.

“Today we showed the characteristics of our game, based on a solid blocking-defence system against a team like Mexico that plays fast,” said Estonian coach Gheorghe Creu. “And of course, when the reception is working, our entire attacking force is enhanced; we could use all of our attackers. Tomorrow we will face a team with similar qualities, as Spain play fast volleyball, keeping the ball alive and working each point. They have good defenders and for sure is going to be a very interesting game.”