France, Belgium Win in Pool I1 to Set Up Sunday Showdown 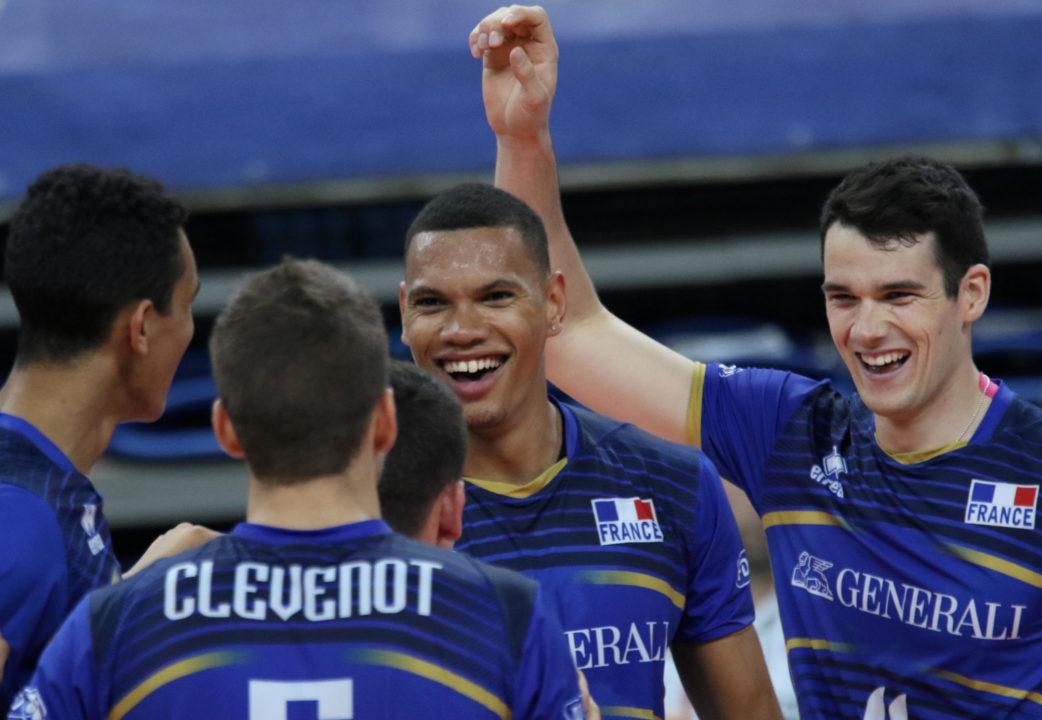 France made quick work of Canada, while Belgium edge Italy in four sets. The winners face off Sunday with a spot in the Final Six on the line. Current Photo via FIVB

France made quick work of Canada, while Belgium edge Italy in four sets. All four teams are 1-1 after two days of play, although France and Belgium are at the top with four points apiece. Belgium stays in the race for the Final Six and will face France on Sunday, while Italy will play Canada will only pride on the line.

France cruised to the sweep of Canada, while Stephen Boyer dominated the stats sheet with 25 points, including 24 kills. France put down 49 kills and served up seven aces, while limiting Canada to 29 kills and one ace. The Canadians did win the battle at the net, outblocking the French 6-3.

Boyer, who continues to lead World League scoring with 151 points in his eight matches, helped France to a 14-10 edge in the opening set, then his team finished off the stanza on a 7-0 run. The Canadians boasted an early 5-3 lead in Set 2, only to see it slip away as the French service game and their own miscues gave France the 25-15 win. France built an 18-12 lead in Set 3 and never looked back in closing out the 25-21 win.

“My team played very well today: almost without mistakes, very intelligent,” French coach Laurent Tillie said. “This team is a perfect mix of young players and experienced players. Yesterday I was not happy at all, but today I have to compliment my team. Especially Stephen Boyer was outstanding.”

Aiding Boyer in the attack for France were Trevor Clevenot and Julien Lyneel, with 10 and nine points respectively.

Stephen Maar paced Canada with 12 points, but the side struggled to land offensive attacks thanks to a stout French defense. Sharone Vernon-Evans added eight points, including seven kills.

“France played a very well organized game, they never gave us the opportunity to execute our own game plan,” Maar said. “Luckily we still have chances to qualify for the Final 6. We want to secure that berth as quickly as possible tomorrow against Italy.”

Belgium squeaked past Italy in four sets on Saturday. The Italians pounded down 61 kills, but gave up 37 points on errors in the loss. Belgium used 46 kills, 12 blocks and six aces to grab the victory.

Belgium had a chance to close out the match in three sets as it led 25-24, but Italy prevailed after Luca Vettori saved match point with a key block. The Belgians took out their aggression, cruising to the final set victory after going up 15-13 and following with seven straight points.

Vettori managed a match-high 22 points, with 20 kills, but it was not enough for the Italian side. Iacopo Botto added 14 points, including 13 kills.