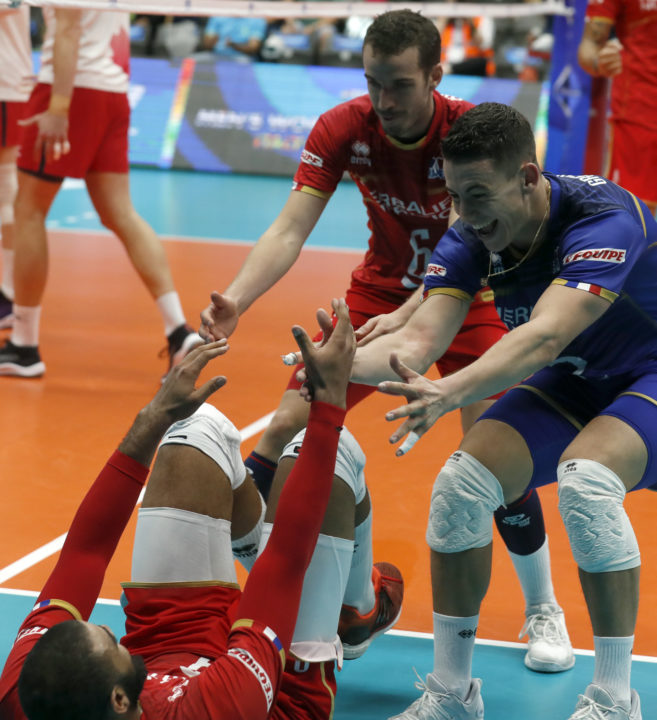 While the 4 teams that would advance were already settled before the final day of competition in Pool B, the order in which they would advance was very-much up in the air. Brazil’s sweep of China gave them 11 points, and the best ‘sets’ ratio to win the tie-breaker with the idle Dutch Men and win the group. Meanwhile, France bounced back from their upset loss at the hands of the Netherlands to beat Canada 3-1. That’s a 2nd-straight loss for the Canadians, which dropped them from the top of the group at 3-0 on Saturday to 4th in the group on Tuesday.

In spite of another strong performance for 20-year old Canadian opposite Sharone Vernon-Evans (11/19, 2 blocks), France recovered from their loss to the Netherlands to win Tuesday’s match in Ruse.

Earvin Ngapeth was back at full strength for the match after being eased into competition while recovering from an abdominal injury. In his best performance of the World Championship yet, Ngapeth came out of the gate with an 8-point first set en route to 22 total points (19/30 hitting, 63%, 3 aces) in the match.

There were some shockingly-lopsided statistical outcomes in the game. Canada had 16 blocks, as compared to just 2 for France, who continue to play without their tallest player and starting middle blocker Kevin Le Roux, who left early in their first game of the tournament with an aggravated thigh injury.

Without his presence, France’s middle block has become almost non-existence, with young replacement Barthelemy Chinenyeze being used in almost a middle-hitter role (he was 7-for-12 in the match but had no blocks).

Canada was led in blocks by outside hitter and captain Gord Perrin, who had 5 in the match. Graham Vigrass and Daniel Vandoorn each contributed 3 as well.

On the reverse side, France had 8 aces, and the Canadians 0. France was  led by 3 from Ngapeth, but also got 2 from Julien Lyneel, who served as a serve specialist in each of the 4 sets and put in 2 aces in a service run in the clinching 4th set.

Stephen Boyer, France’s 22-year old starting opposite, struggled in the first 2 sets, hitting just 3-for-9. Fortunately for France, though, they have youth and depth in that role, so coach Laurent Tillie was able to recall 21-year old Jean Patry toward the end of the 2nd set, and he hit 10-for-16 in half-a-match. That made him the only Frenchman aside from Ngapeth in double-figures.

One of the most expected games of Pool B delivered some nice plays as France @ffvolley 🇫🇷 beat Canada @VBallCanada 🇨🇦 in Ruse 🇧🇬 by 3-1.

Before getting to the second round, take a look on this 👇#FIVBMensWCH #volleyball #volleyballWCHs pic.twitter.com/UwM67FcRpi

Brazil’s pre-match comments indicated wariness of a scrappy Chinese team, but ultimately the South Americans cruised to a pool-clinching 3-0 sweep of  Japan in just 83 minutes.

Brazil went aceless in the match, in spite of China’s 4 previous opponents racking up 33 of them in the minimum 12 sets. Brazil finished the preliminary rounds with just 20 aces, which ranked them 16th out of 24 teams (and only ahead of Belgium among the 16 teams that advanced).

Brazil's 🇧🇷 @volei opposite #8 Wallace de Souza shifts to setting and sends the ball over to #13 Douglas Souza (@DouglasCorreiaS) for this sharp swing in their 3-0 (25-21, 25-22, 25-17) win on China 🇨🇳 in Pool B Ruse#FIVBMensWCH#volleyballWCHs#volleyball pic.twitter.com/tmDLtAPHQh

Brazil 🇧🇷 @volei posts fantastic pick-ups in this play but China's🇨🇳 #17 Libin Liu finds that perfect moment for that swing from backrow#FIVBMensWCH#volleyballWCHs#volleyball pic.twitter.com/v3K95C4Ga5