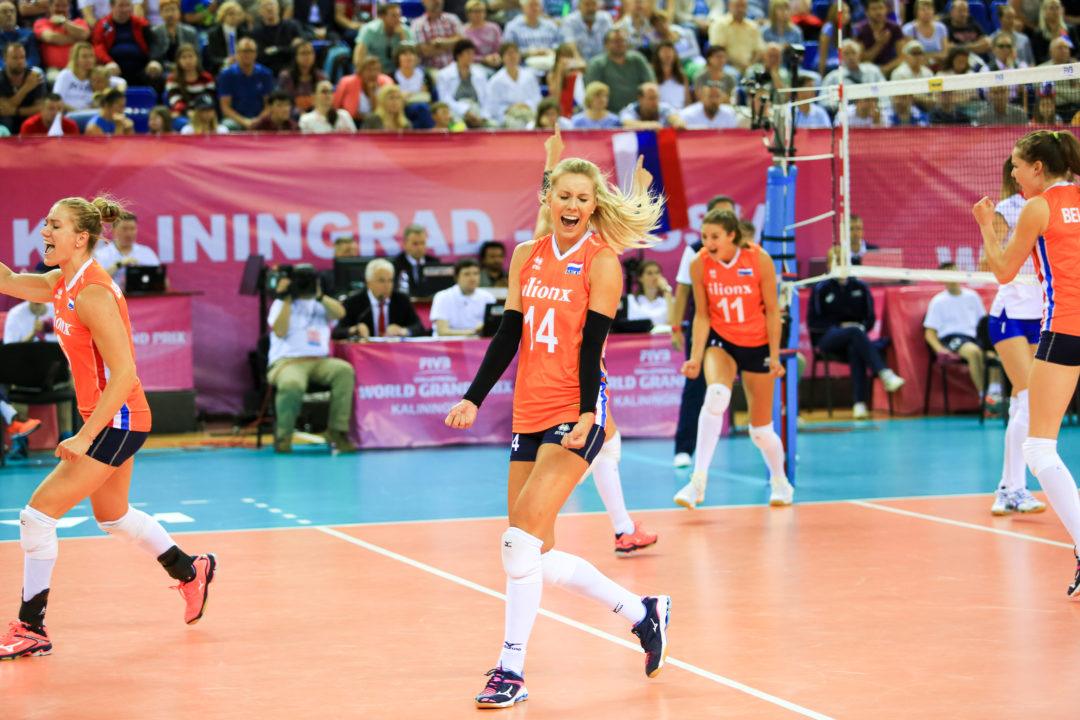 Netherlands swept Russia in the Pool F1 finale for the pool victory to improve to 5-1 overall. Current Photo via FIVB

The headliner match was between Netherlands and Russia on the day, with the winner taking the Pool F1 crown and ending the week 3-0. In the form of that desired record, the Dutch side defeated Russia 3-0 to finish atop their pool for the second straight week.

In terms of scheduling, the first match of the day was between Dominican Republic and Belgium. It kicked off the Pool F1 day with a five-set match – although none of the sets were extremely tight. The Dominican Republic was the team who came out with the win to salvage a piece of the weekend while Belgium is still looking for their first win.

Both teams started week two at 2-0 after coming into the pool with different resumes. For Netherlands, they won Pool C1 and went 2-1, while Russia started 0-3 and has done a nice job at redeeming their record. However, they couldn’t keep their winning streak alive as they ran into a powerful Netherlands attack that out-spiked Russia 46-25.

Beyond the attack, the Dutch also kept pace in blocks (7-7) and had one more ace (5-4). Three players scored in double-digits with Anne Buijs and Maret Balkenstein-Grothues combining for 29. Celeste Plak led the trio with 16 points as her total included 14 kills on just 21 swings.

Netherlands also played well defensively in the sweep that featured a tight second set. They held Kseniia Parubets to eight kills on 30 swings. Besides Irina Zaryazhko (11 points) and Parubets, no other Russian player had five or more points in the loss to the Dutch.

After two weeks of play, Netherlands has collected two pool victories and five wins to just one loss. Their success has them in second place of the overall Group 1 table – only trailing Serbia in set ratio. They’ll go for a third pool victory and a spot in the final six in Pool I1 where they will meet USA, Brazil and Belgium.

For Russia, the don’t end the week on a high note, but after starting 0-3 they are in a much better position. They still will need at least two wins next week (maybe even three) for a chance at the final six when they play Serbia, China and Japan – all teams ranked ahead of Russia and in the current top six. The good news for Russia though is that they’ve collected three points during losses and would likely be sitting pretty in any tiebreakers due to points.

In a meeting of two 0-2 teams in Pool F1 coming into the day, the Dominican Republic utilized a commanding attack to pull out a five-set victory over Belgium.

The Caribbean nation totaled 70 kills in the match compared to Belgium’s 47. The European side did retract some points by recording more blocks (12-7), aces (8-5) and with six less errors, but it wasn’t enough to overcome the strong offensive game of the Dominican Republic.

That was apparent in the first set, as it was a 25-13 rout. The two teams would exchange sets until the fifth when the Dominican Republic came out on top 15-11 for a five-set win.

With the win, the Dominican Republic salvaged a weekend that started 0-2. Combined with their 2-1 opening start, they’re 3-3 and are a win back of the final six. They’ll likely need two wins next week in Pool H1 with Thailand, Italy and Turkey on the slate.

For Belgium, they are now officially eliminated from playoff contention. They still have plenty to play for though after they recorded their first point of the tournament in the loss today. Currently in last of the standings, Belgium needs a win (maybe more) to avoid relegation. It won’t be easy though, as Brazil, USA and Netherlands represent the upcoming schedule.