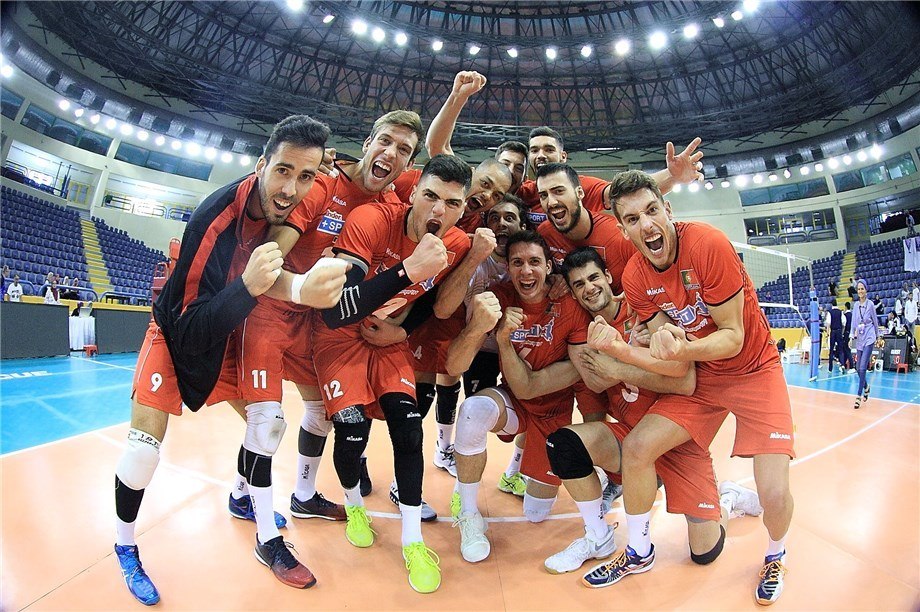 Slovenia downed home-standing Egypt in a hotly contested sweep, with each set decided by just two points and the second building to a 39-37 score, while Portugal managed a four-set win over Finland to start Pool H2 play on Friday.

Portugal served up 14 aces in the match, while Finland countered with 13 blocks in a slim decision which the Portuguese won 95-88 on points.

“Our performance in the last matches was not good and we needed this win to promote our confidence,” Portuguese coach Hugo Silva said. “Tomorrow’s match against Egypt is a crucial match – who will win, will continue in the Group 2.”

Finland used its block to get ahead in Set 1 then turned to Urpo Sivula for some offense en route to the 25-20 win. A strong service game lifted Portugal to the 25-22 Set 2 victory. After an early tie at 6-all, Portugal built a 16-11 lead in Set 3 and never looked back in a 25-19 as Finland continued to struggle with reception and defense. The final stanza was back and forth until Portugal got two kills from Valdir Sequeira to go up 21-20 and held on for the 25-22 win.

Sequeira led the way for Portugal with 19 points, including 12 kills and six aces, while Alexandre Ferreira followed with 17 points, a match-high 15 kills and two aces. Lourenco Martins added 12 points, including 10 kills, while Phelipe Martins chipped in nine points, with a team-leading three blocks.

Our serves and reception were not good and Portugal was better than us,” Finland coach Tuomas Sammeluvo said. “We had some crucial moments in the third and fourth set, we could fight against them but we didn’t profit from these moments and we lost.

Egypt put up quite a fight, but fell just short in each stanza against a tough Slovenian team. It was miscues that did the Egyptians in, as they committed 29 while receiving help from just 22 from their foes. The rest of the stat sheet was fairly even with Slovenia winning the offensive battle (47-45), the teams tied in blocks (8 apiece) and Egypt winning from the service line (8-5).

Egypt took a two-point lead at 6-4 but Slovenia caught up at 9-all before going ahead 18-13 after a series of Egyptian miscues. The home side bounced back to catch up at 18-18 and eventually earn set-point chances at 24-23 and 26-25. A kill by Mitja Gasparini, however, grabbed Slovenia the 39-37 win.

Slovenia built a 14-10 lead in Set 3, but Egypt rallied to knot the score at 16. The teams tied several times down the stretch and Egypt took a 22-21 lead on a block. The comeback was not to be, however, as Slovenia closed out the stanza with a 4-1 run.

Gasparini and Tine Urnaut paced the Slovenian attack with 18 and 15 points respectively. Gasparini managed 17 kills and a block, while Urnaut followed with 12 kills and three aces.