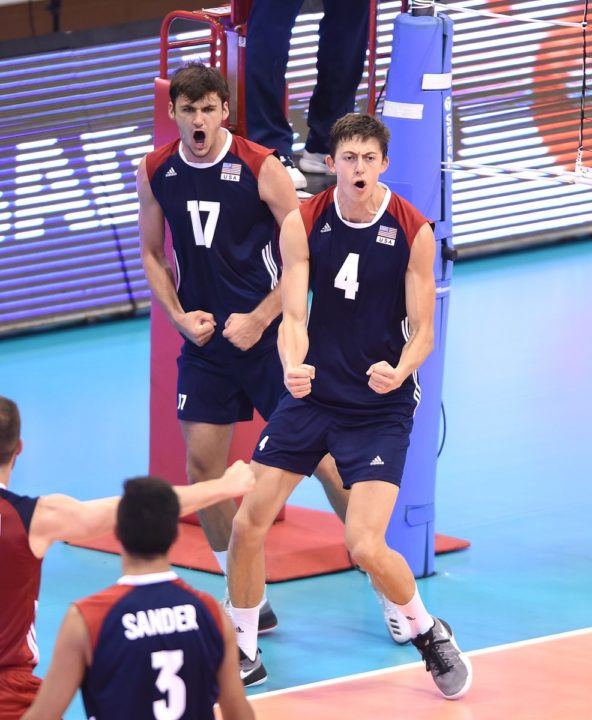 The United States outblocked Italy 11-5 and got a match-high 14 points from Ben Patch in a sweep Friday for their first World League win. Current Photo via USA Volleyball

The United States finally broke through into the win column with a sweep of Italy to kick off the second weekend of FIVB World League action.

The U.S. team defeated the defending Olympic silver medalists 25-22, 25-23, 25-23, avenging the loss that ousted the Americans from title contention in Rio last year.

The United States outblocked Italy 11-5 and got a match-high 14 points from Ben Patch, who has been a consistent factor for the team thus far in the tournament. The match-leading effort follows a 17-point effort against Canada and 21-point outing, including four blocks, against Belgium. On Friday, Patch tallied a match-high 13 kills (.571 efficiency) and a team-best four blocks. Outside hitter Taylor Sander added 10 points, with nine kills and an ace.

Patch got the start for the third straight match. Fellow BYU star Jake Langlois also was among the starters after not playing at all against Belgium. Micah Christenson was back in the driver’s seat at setter after coming in just briefly as a substitution again the Belgians.

“It feels great to get our first victory,” Christenson said. “We really grew up today. We grew a lot and we got better as a team. To be able to finish sets, that’s something we struggled with the first weekend and that’s something we were able to do today. Everybody came in and played really well and consistently. We didn’t have a lot of ups and downs.”

Italy led 5-2 in the first set, but the Americans rallied to take an 18-15 lead with help from a handful of stuffs en route to the 25-22 win. Patch chipped in eight points in the opening stanza.

The U.S. led early in Set 3, surging ahead 11-8 on a block by Sander, but Italy countered and led 18-15 after the second technical timeout. A block by Chistenson pulled the Americans within one at 21-20. An ace by Garrett Muagututia broke a 23-all tie and gave the United States first shot at the match. Another Christenson stuff sealed the team’s first win in 2017 World League play.

In the Americans’ favor was the fact that three Italian superstars were not on the roster after sitting the tournament out and the Italians limped into the weekend after going 1-2 with just a win over Iran to show for it.

Watch the full match below.