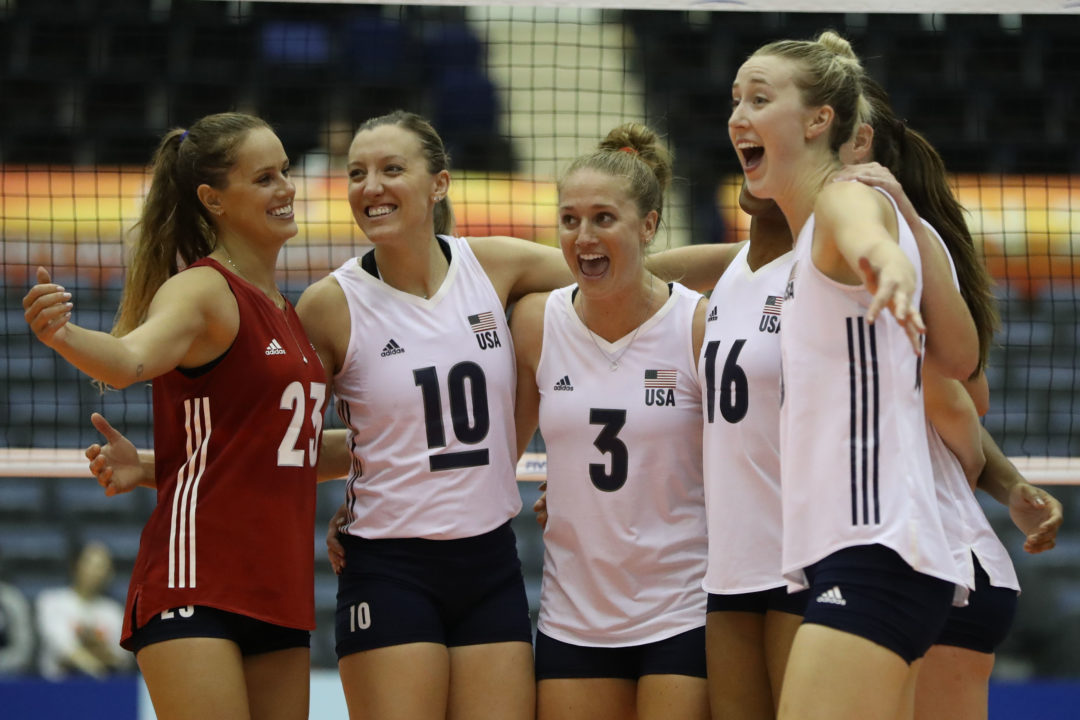 A balanced American offense saw 4 players score in double figures as they earned an opening win over Azerbaijan. Archive Photo via FIVB

On the first day of the 2018 FIVB Women’s Volleyball World Championships, Pool C saw two favorites (Russia and the United States) win, while Thailand topped South Korea 3-2 in what could be a determining match for which team moves forward to the 2nd round of play and earns a bid for the Olympic qualifying tournament next year.

Nations League MVP Michelle Bartsch-Hackley started the tournament on the bench, as did 2016 Olympian Karsta Lowe, with Kelly Murphy getting the start at opposite, and Kim Hill and Jordan Larson starting at oustide hitter.

Larson and Murphy had 11 points each, while Hill added 12 for the Americans. The team hit 50-for-111 as a group (45%), though their middles and reserves contributed heavily to that effort: those 3 scorers mentioned above hit just 38% combined, while Lowe (6-for-9), middle Foluke Akinradewo (8-for-15), and their setters (combined 4-for-4) helped bring up the average.

Sarah Wilhite also had 2 aces in 6 service attempts as a service-specialist in the match. With the Americans not able to put much service pressure on from their starting l ineup (Murphy had 2, Akinradewo had 1), hers were crucial points.

Azerbaijan leaned more heavily on their star, 28-year old Polina Rahimova. She had 17 kills in the match to go with 2 blocks and 4 aces for 23 total points (including 9 in the opening set alone). She took 38% of her team’s shots, while Hill, the Americans’ most prolific weapon on offense, took just 26% of her team’s shots.

That predictability in the Azerbaijani offense allowed the Americans to hold them to under 35% hitting, in spite of a relatively error-free match for the Eurasians

Natliya Gonchorova continued to lead the injury-plagued Russians, with 13 points in a 3-0 win over Trinidad & Tobago on Saturday and Kobe. T&T will likely finish 6th in the group.

Gonchorova hit 12-for-20 (60%), part of an efficient 55% effort for Russia (only 11 errors) that took only 73 minutes to finish off their opponents. Ksenia Parubets followed her with 10 points, all coming on 19 swings; and Irina Koroleva had 6 blocks to rank 2nd in the tournament after 1 day of action behind China’s Xinyue Yuan (7).

Captain Yevgeniya Startseva got the start at setter, bringing some clarity to a setter rotation and controversy that saw head coach Vadim Pankov cut his own daughter from the team and had Gonchorova complaining about the last-minute changes at the position and its impact on the team’s preparation.

Channon Thompson led T&T with 10 kills on 27 swings, and also contributed an ace to the team’s effort.

In the most interesting match of the evening, and a replay of the Asian Games semifinal that Thailand also won about a month ago, the Thais won a wild back-and-forth battle 3-2 over regional rivals South Korea.

Both teams are in a time of transition, with a veteran core handing off a world-class group of young players. That message showed up in both teams, as young, and old, combined for the team’s success in a crucial 5-set match.

The Thai team was led in scoring by 20-year old Pimpichaya Kokram, who had 25 points on 23 kills and 36 swings, while 32-year old Onuma Sittirak had 16 points, but it took her 51 swings to get there. Another veteran, 34-year old Pleumjit Thinkaow, led Thailand with 3 blocks.

For South Korea, it was 30-year old superstar Yeon-koung Kim who led the team with 23 points on 21-for-47 hitting, while 25-year old Park Jeongah had 18 kills. South Korean veterans Hyo Jin Yang and Su Ji Kim combined for 25 points, including 8 blocks.

Thailand looks more prepared for the next generation to take that torch, even with 18-year old outside hitter Chatchu-on Moksri playing only a bit part as a service specialist in the 5th set of the match. She sprained her ankle in the Asian Games earlier this summer, and is said to be at about 90% fitness – but officials also said they wouldn’t use her until they really felt they needed her. She was the team’s top scorer before the injury.