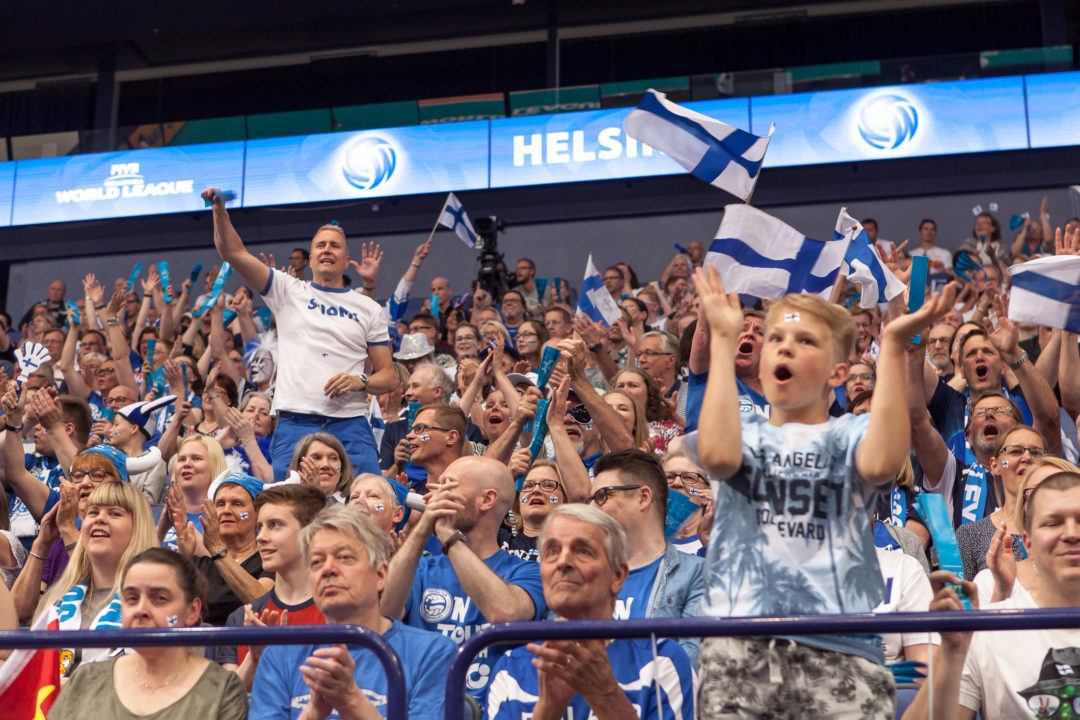 Australia and Finland moved to 2-0 in Pool D2 play, topping Slovakia and China respectively, setting up a battle for the pool's top spot on Saturday. Current Photo via FIVB

Australia and Finland moved to 2-0 in Pool D2 play, topping Slovakia and China respectively, setting up a battle for the pool’s top spot on Saturday.

Australia has yet to drop a set in second weekend play, after managing just one win on opening weekend. Finland went 0-3 on opening weekend, but has bounced back in fine form, sweeping Slovakia Thursday and topping China in four sets Friday while playing at home in Helsinki.

China and Slovakia will play Saturday, while Australia and Finland face off in the Pool D2 finale.

After dropping set 1 25-21, Slovakia found itself in even more trouble as libero Martin Turin injured his hand and the team had to use Matej Patak in the role as second-string libero Frantisek Ogurcak also was injured. Despite the injury, Slovakia stayed close in Set 2, trailing just 17-16, but could not rally past the Australians, falling 25-19. The teams played to a 22-all deadlock in Set 3, but Australia closed out the sweep with a kill by Nathan Roberts and a Slovenian service error.

“Slovakia had libero injuries and we put them under pressure with our serves and attacks,” Australian captain Paul Carroll said. “We pushed them from the net. They kept fighting, but we kept our heads up in some difficult parts of the third set. We just kept working.”

“I am very happy with the team’s performance,” Australia coach Mark Lebedew said. “It was very important to play as well. Our block and defense were good in some moments. Tomorrow will be another new match. We have the Final Four on our home soil, but that shouldn’t change our way of playing. It is important to build the team.”

“It was a very difficult match,” Slovakian captain Emanuel Kohut said. “Australia pushed us really hard. All respect to Australia, but we had big problems with our own game.”

A crowd of more than 6400 helped will the Finnish side to victory, despite the fact that the team was outblocked 11-5 and gave up 32 points on errors. For its part, Finland managed nine more kills (59-50) and served up three aces, while allowing just one.

“It was a great match to see for the young kids who were in the audience,” Finnish coach Tuomas Sammelvuo said. “Our players were absolutely fantastic today. We coaches didn’t do so good a job. When we had troubles during the match the players must find the solutions themselves and they did. Service and reception were good again, but we had big troubles to block the big Chinese attacks. However, our players stayed focused and the result was good.”

Chuan Jiang scored a match-high 23 points, but it was not enough to fuel the Chinese to a victory. Bingiong Zhang followed with nine points. Shuhan Rao put up a match-high four blocks.

The teams were knotted at 23 in Set 1, when a kill and a Chinese hitting error gave Finland the win. China’s block coupled with Finnish miscues gave the visitors the 25-21 Set 2 victory. Finland went up 14-8 in Set 3 and held off the Chinese attack, which cut the margin to two on a couple of occasions. China led 12-6 in Set 4. Finland tied it up at 14, but the Chinese vaulted ahead 23-20. Finland knotted it up at 23 and won the match on a Jan Helenius kill.

“It was a good match from Finland and they deserved to win,” China’s coach Raul Lozano said. “Score was very tight and small differences made the result. This was for us better match than yesterday, but we couldn’t seal the sets for us. Our team played well.”