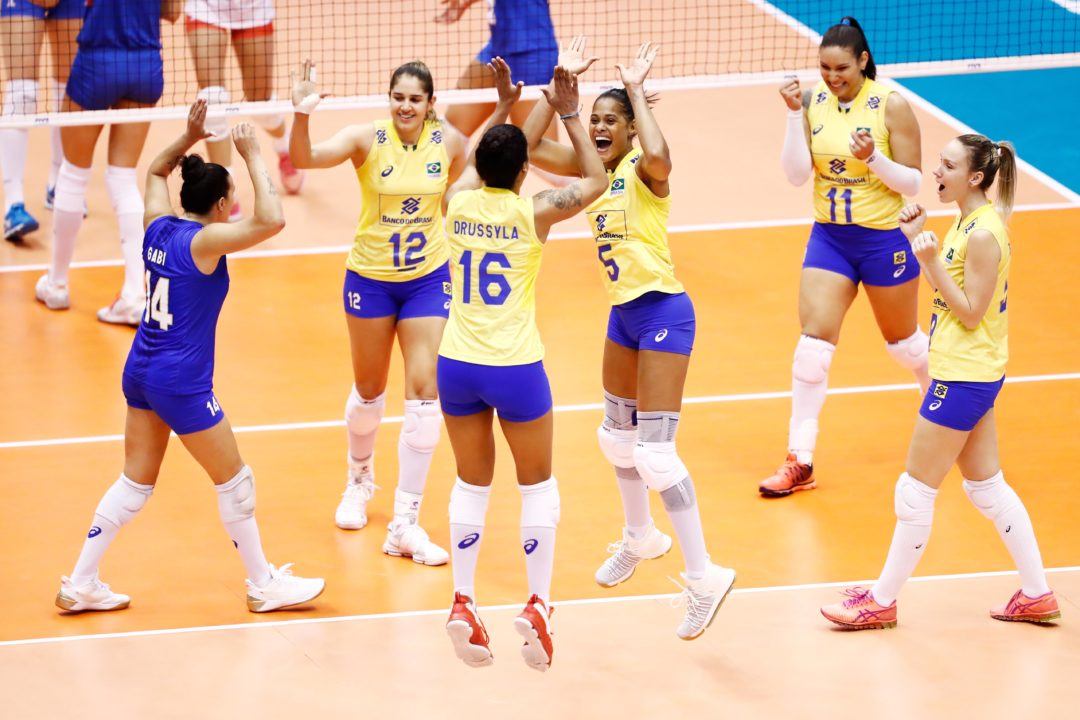 Brazil avenged an earlier loss to Serbia, while Japan held home court on Day 1 of the second weekend of World Grand Prix action in Sendai, Japan.  Current Photo via FIVB

Brazil avenged an earlier loss to Serbia, while Japan held home court on Day 1 of the second weekend of World Grand Prix action in Sendai, Japan.

The Brazilians had to rally from a 23-20 deficit for the Set 1 win, but finished the match in a 3-0 sweep. After scoring six straight to close out the opening stanza, Brazil carried the momentum into Set 2, racing ahead 19-9. Serbia bounced back to take a 17-12 lead in Set 3, but the Brazilians regained the lead at 20-19 and won the match on a Tandara Caixeta kill.

“I’m really satisfied with our match, and with our technique,” Brazilian coach Jose Guimaraes said. “We had a team meeting and analyzed the other team’s strengths. And I think we could learn a lot about those teams as well as ourselves.”

“Brazil won today, and very easily too, I can say,” Serbian coach Zoran Terzic said. “The most important reason was that they wanted to win much more than my team. Unfortunately, we didn’t play so well, and our motivation for this game wasn’t on its usual level as it needs to be. Maybe that’s because in our last game against Brazil we won 3-0, just last week in Turkey. And maybe because of this some players thought it would be easy today. But with a team like Brazil you just can’t play them that way. I really think starting from tomorrow we will play much better.

Ana Bjelica put down 15 points, including 14 on kills, while Brankica Mihajlovic added 11 points, all on kills. Jovana Stevanovic led the Serbian block with four stuffs, while Bianka Busa added three.

Japan kicked off Week 2 of Grand Prix play with a four-set home victory over Thailand. Neither team allowed the foe more than 20 points in set victories as Japan won all statistical categories.

“We had a trouble with Thailand’s speedy combos,” Japanese coach Nakada Kumi said. “Our service, which we worked on in training camp, was better than before. We play Serbia tomorrow, and they play an entirely different style, so we will try to do the best we can against that. This was our first match of the tournament here in Japan, and there was a lot of pressure, and I don’t think we played our best.”

“The tempo of the game was good today, but we made a few simple mistakes,” Thailand captain Pleumjit Thinkaow said. “Japan’s service was really strong, so we couldn’t receive as well as we’d like. We couldn’t play the combination volleyball that we’re used to.”