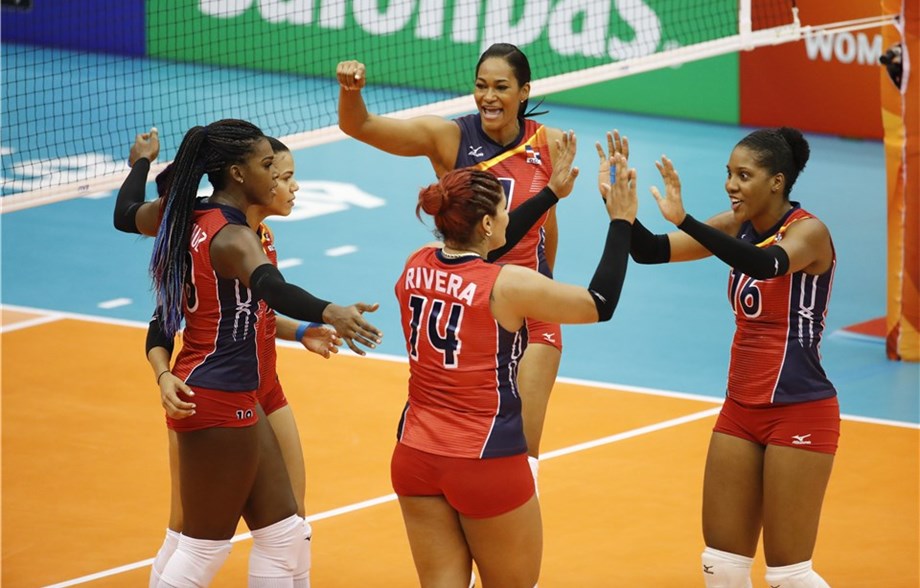 Brazil secured its spot in the second round, while Kazakhstan was eliminated in Pool D on Wednesday. Brazil, the Dominican Republic and Serbia all won in sweeps.  Current Photo via FIVB

Brazil secured its spot in the second round, while Kazakhstan was eliminated in Pool D on Wednesday. All three matches were decided in sweeps.

The third and fourth spots in the group belong to the Dominican Republic and Puerto Rico at 2-2 (6 points), but Kenya (1-3, 3 points) still has a chance with a Thursday meeting looming with the DR.

“The Dominican Republic had a strong game in all facets today,” Puerto Rican captain Natalia Valentin said. “We were our own worst enemy.”

An 11-block effort helped lift the Dominican Republic to the victory. The DR led 11-5 in stuffs, 39-35 in kills and earned six extra points off Puerto Rican miscues (22-16). Each team served up three aces.

The Dominican Republic built a three-point edge midway through Set 1 at 14-11 and held on for a 25-22 victory.

The DR boasted a 16-10 lead at the second technical timeout in Set 2 and poured it on from then en route to a 25-17 victory.

“We are happy to get the win and the three points,” DR coach Marcos Kwiek said. “Puerto Rico played well. This was an important game for us. We knew we needed to concentrate because Puerto Rico knows us well. Our blocking was good in the center though are attacking was not. We attacked effectively on the wings. We will face strong teams in the second round.”

“We didn’t play with the energy and motivation we had two nights ago; I can’t say I’m satisfied with the effort,” Serbian coach Zoran Terzic said. “We need to have focus and concentration in every game. It is a long way until the final. It is important for us to focus game-by-game.”

Serbia dominated all facets of the game, but gave up 17 points on errors in the match. The Serbians nearly doubled their foes in kills (45-24) and outdid them 11-3 in blocks and 9-3 in aces.

Yana Petrenko led eight scorers for Kazakhstan with seven points on six kills and an ace. Yekaterina Zhdanova (6) and Natalya Akilova (5) added five kills apiece, while Zhdanova was one of three players with a block to her credit.

Kazakhstan owned a brief advantage in Set 1 at 12-11, before Serbia scored five in a row to turn the tables and pull away en route to a 25-18 win. Rasic piled up 11 points in the opening stanza.

The Kazakhs built a 10-6 lead in Set 2 with help from Serbian miscues, but the victors righted the ship with a 5-1 run to tie it up at 11. Another 5-1 run gave the Serbs a 21-16 lead and Mihajlovic closed out the stanza with a stuff.

“Serbia was very strong,” Kazakhstan captain Radmila Beresneva said. “It was a tough game. We played better today than before in the other matches.”

“We got our confidence back today after the Serbia match where we defended poorly,” Brazilian captain Natalia Pereira said. “We changed players tonight and got the momentum form the start. Kenya has made a lot of progress. I admire them.”

Pereira piled up a match-high 12 points in the final two sets on six kills, four aces and two blocks. Pereira posted seven points in Set 2 and five in Set 3. Tandara Caixeta tacked on 11 points in the first two sets with 10 putaways and an ace. Ana Carolina Da Silva added eight points with three kills, a team-best three blocks and two aces. Twelve players saw action in the match with 10 scoring.

Emmaculate Chemtai was the top scorer for Kenya, turning in nine points on seven kills and two blocks. Violet Makuto added six points with four putdowns and two blocks. Sharon Chepchumba chimed in with five kills in a substitute effort.

“We started well,” Kenyan captain Mercy Moim said. “Brazil is the best team in the world. We tried to control their serve, reception and attack. Our young players got some good experience in this match. We played our best. That’s what we did.”

Kenyan miscues aided the Brazilians in a dominant Set 2, which saw the victors vault ahead 134 and carry on to a 25-10 win.

Brazil scored seven of the first eight points in Set 3 and led by seven at 14-7. Kenya fought back, but could not break through, eventually falling at 25-16 on a Rosamaria Montibeller putaway.