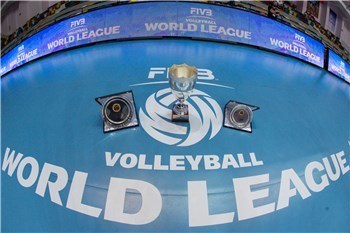 The FIVB World League 2017 draw took place Tuesday and gave volleyball fans something to look forward too for next... Current Photo via FIVB

The opening match will see a rematch of the Olympic Final as Brazil will take on Italy. The Gold Medalists will also face off against last years World League Champions Serbia, who defeated Brazil in the the Final.

In the opening week, The United States is paired up against reigning champions Serbia and as well as Canada and Belgium.

In the second week of competition, USA will face tough competition as they will see the likes of France, Olympic Silver Medalists Italy and Russia, whom USA beat to win Bronze in Rio.

The third week has the USA facing Russia again, as well as 2012 World League and 2014 World Champions Poland. Iran will also face off against USA.

Group 2 and 3 are seen as “lower leagues

“, with the winner moving up a stage next year. Last year’s winner Canada joins Group 1 while Slovenia won Group 3 and are now in Group 2.

The action begins June 2nd while the Finals will take place from June 28th thru the Championship match on July 2nd. 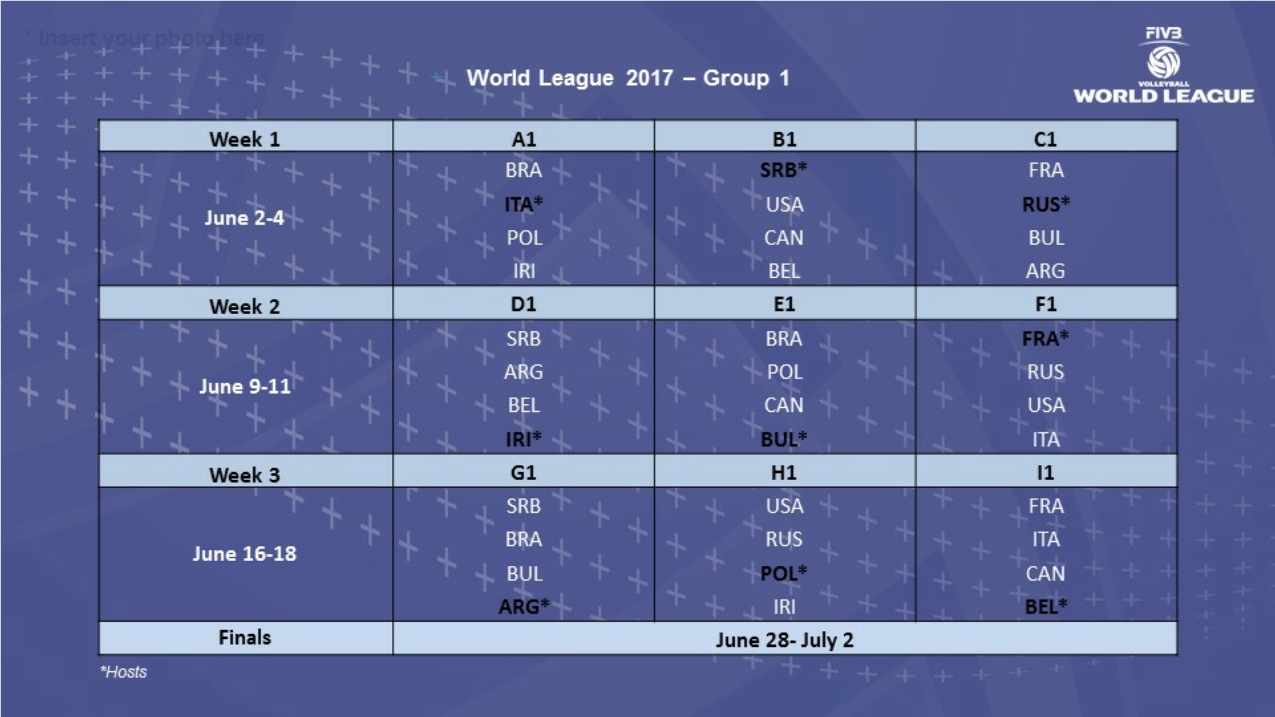 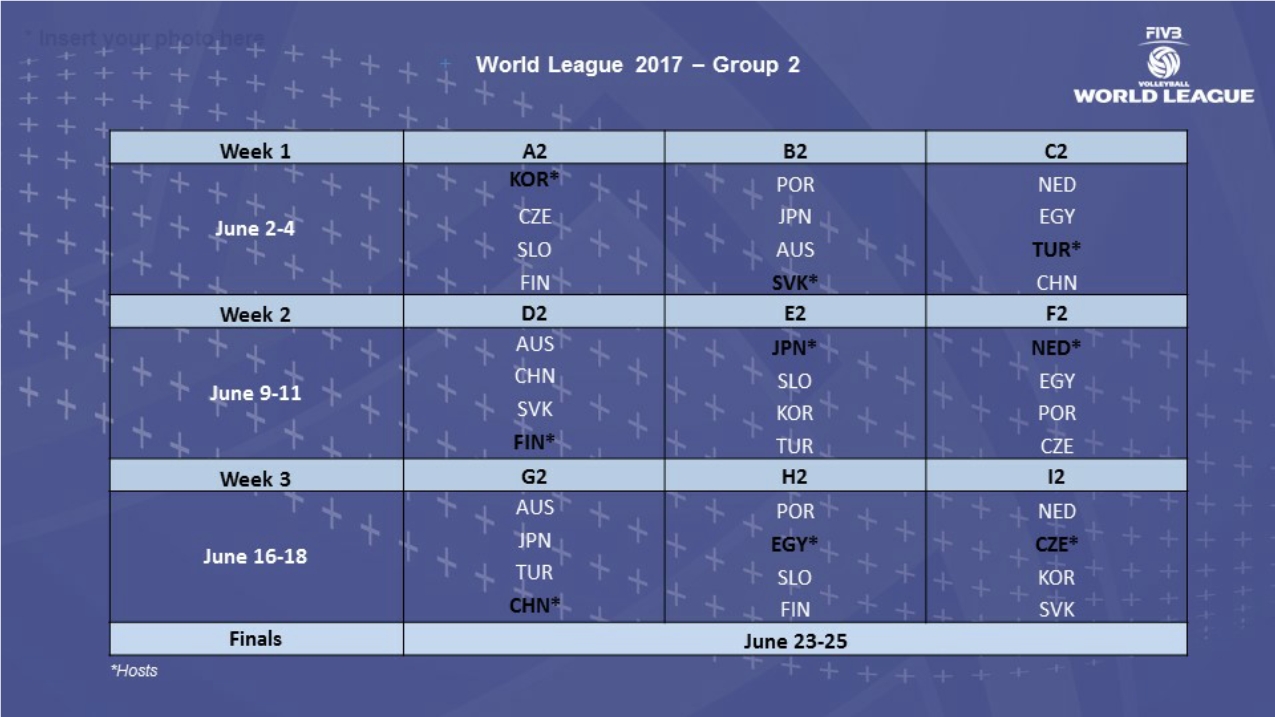 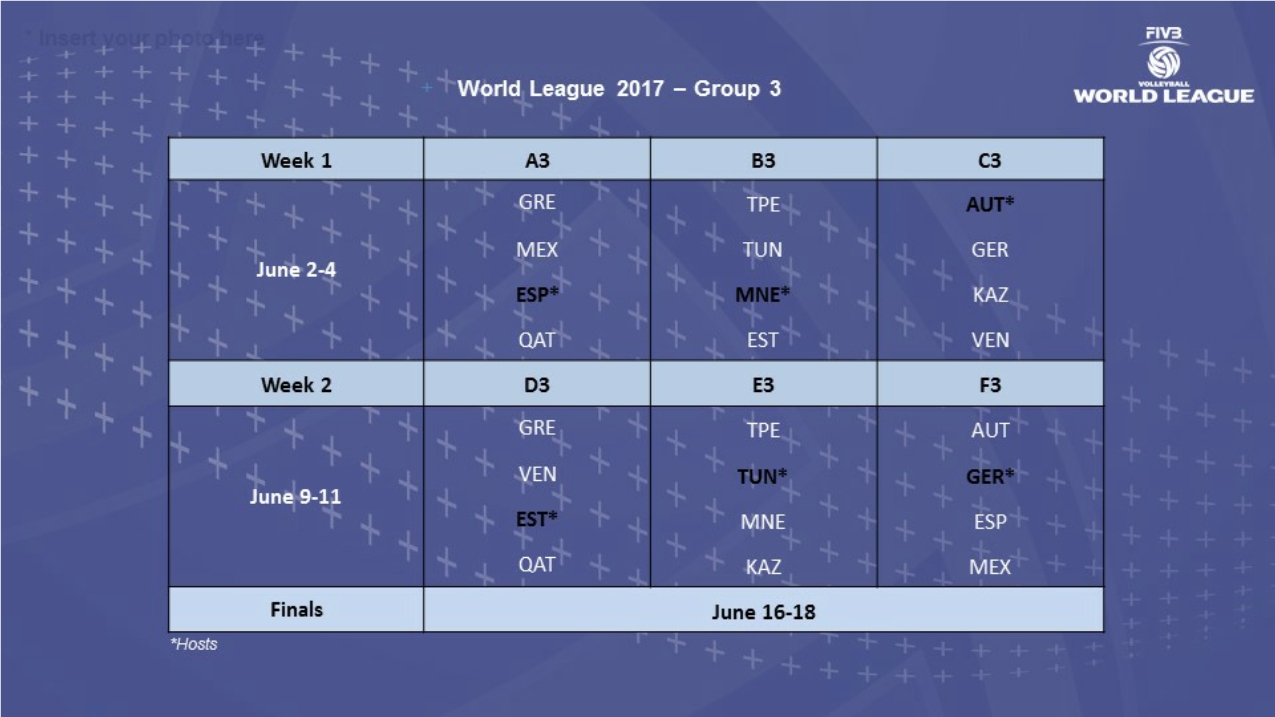 Lausanne, Switzerland, September 13, 2016 – Olympic champions Brazil will take on Italy on the opening weekend of the FIVB Volleyball World League

2017 from June 2-4 in a repeat of the men’s Olympic final, following the completion of the draw for the 2017 World League

during the FIVB World League

Council meeting at the FIVB headquarters on Tuesday.

The Olympic final in Maracanazinho, which Brazil won 3-0 (25-22, 25-22, 25-20) 23 days ago, was an epic affair with an electric atmosphere and all of the world’s volleyball fans will now have their eyes on their opening World League

encounter next year.
The Brazil v Italy matchup is one of the most popular encounters in international volleyball with both countries steeped in volleyball tradition and passion. It also features the two most successful sides in the World League

with Brazil – last year’s runners-up – boasting nine titles and Italy eight. They have played each other 34 times in the World League

The draw, which was overseen by FIVB President Dr. Ary S. Graça F° and conducted by World League

Council President Renato Arena, sees Italy host Brazil, Poland and Iran on the opening weekend of matches, while title-holders Serbia will welcome USA, Canada and Belgium in Pool B1 and last year’s bronze medalists France, Bulgaria and Argentina will travel to Russia.

Meanwhile, a repeat of this year’s FIVB Volleyball World League

final between title holders Serbia and Brazil will take place in Week 3 on the weekend of June 16-18 in Argentina.

in each country will be confirmed at a later date while an official bidding process for the Finals of each Group will be launched later this week with Brazil (Group 1), Australia (Group 2) and Mexico and Austria/Germany (Group 3), already having expressed interest.

Council confirmed that next year’s World League will adopt the same format as 2016, when a record 36 teams participated in the competition. The 36 teams have been split into three groups of 12 teams and will play the Preliminary Round in a pool format over three weeks, before the best teams gather for the Finals in each Group.

The top teams in each Group in 2016 are promoted for next year’s competition, while the bottom teams are relegated. Australia move down to Group 2 in 2017 while Canada will play in Group 1. Due to Cuba’s withdraw, Portugal remain in Group 2, while Slovenia move up from Group 3 to Group 2. Puerto Rico was a late withdrawal and was replaced by European League