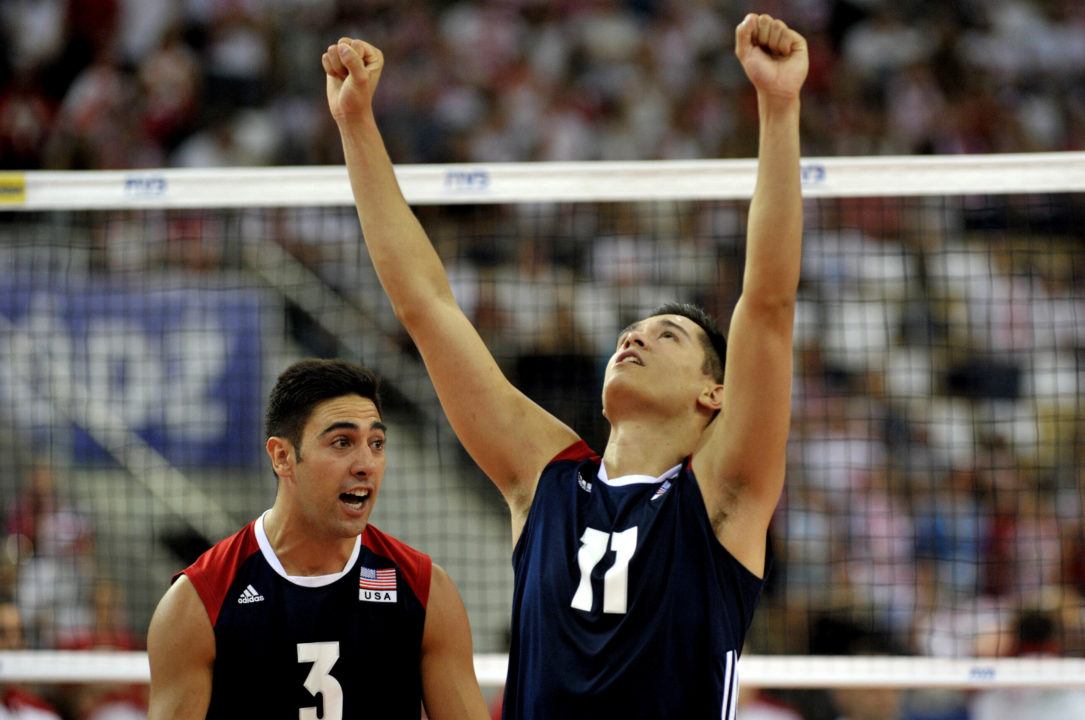 The Americans stayed in the race for the Final Six with a win over Poland, while Russia punched its ticket to Brazil with a sweep of Iran.  Current Photo via FIVB

The United States had a lot to play for against Poland on Sunday. A win in less than five sets would give the Americans an outside chance at a spot in the Final Six with some help. The USA did just that, moving to 4-5 in the tournament with a four-set win over the Polish. The Americans must now wait and see the result of tonight’s match between Bulgaria and Argentina. A Bulgarian loss puts the United States in the Final Six.

The other Pool H1 match saw Russia top Iran via sweep to punch its ticket to the Final Six.

Iran played several of its reserves in the match, but that did not throw the Russians off their game, as a win meant a ticket to Brazil.

“We did a good job,” Russian coach Sergey Shilapnikov said. “It is a result which we expected. Players showed discipline on court. Before the next matches we need to improve our game in all elements.”

“I think it was not a good match, but we lost a chance to qualify for the final six before and for Russia it was very important game,” Iranian captain Mir Saeid Marouflakrani said. “But it’s good that we played with six other players. They played very good even if they don’t have a lot of experience from this World League. They played with their maximum, but it’s Russia and they were perfect in serve and block during this tournament and it was difficult to play against them.”

Russia won all phases of the game, putting down 40 kills (to 29), outblocking Iran 10-5 and serving up six aces, while allowing just three.

In a fairly even match, it was the United States block that spelled the difference in the four-set win over Poland to keep the Americans in the hunt for the Final Six. Team USA outblocked Poland 13-5 and served up one more ace (8-7), while also earning four extra points on errors (37-33).

After trailing 7-4 in Set 1, the Polish side rallied to a 19-15 advantage. The Americans leveled the score and had two chances at set point at 25-24 and 26-25, but the home team came back from down 29-28 to grab the victory. Fueled by the missed opportunity, the United States cruised to a 10-3 lead in Set 3, with help from blocks by Jeff Jendryk and Micah Christenson. USA pushed ahead 18-11 and won the set on a Jake Langlois putaway. Down 16-12 midway through Set 3, the Americans rallied to tie the set at 21-all. The Polish had a chance at the set at 25-24, but David Smith kept the stanza going and eventually served up an ace to reel in the 27-25 win. The teams were knotted at 14 in Set 4, before the United States flexed its offensive muscles to rally to a 21-16 lead and the 25-20 victory.

“We obviously had a challenging tournament, reflecting to the last three weeks,” American coach John Speraw said. “We have new players for whom it was the very first experience in the national team. It is a tremendous achievement to have a chance to play in the Final Six, because we started with three losses. It was a tough time, we had some injuries, and we needed to change the roster completely, so I am very proud of this victory.”

Michal Kubiak led the Polish team with 15 points, including 13 kills, while Dawid Konarski chipped in 12 points, with 11 putaways.

“Congratulations to team USA, who have the real chance to play in Brazil in finals,” Poland coach Ferdinando De Giorgi said. “We cannot blame anyone for what happened tonight. We had our chances in all of the matches we played and a lot of them we did not use. Today we had a problem particularly with the attack. If this element does not work properly, the game becomes very tough. As a coach I need to look at my team through the things we can improve and change to play better volleyball.”