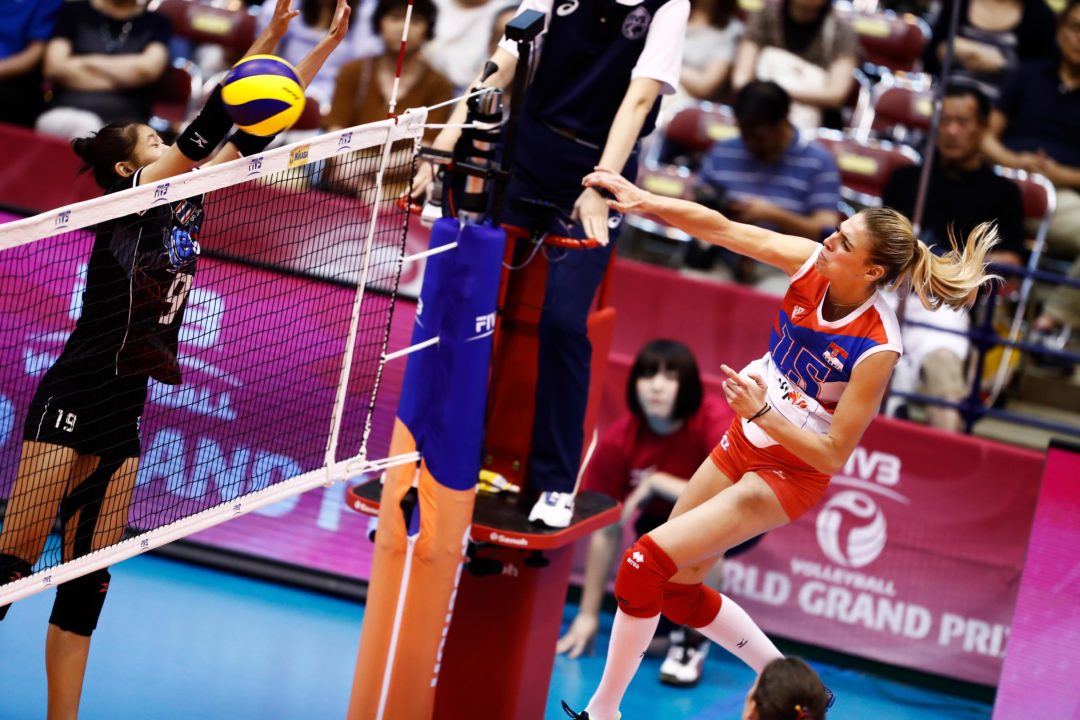 Serbia came out on top of Thailand in four sets, as combined with Japan's five-set win over Brazil won Pool D1. Current Photo via FIVB

The day began with all four teams holding a 1-1 record as Thailand sat atop the standings. Serbia dispatched of the Asian country in four sets, but still needed help – which they got when Japan and Brazil went to a fifth set, securing Serbia’s place atop the pool.

Overall in the week, Serbia and Japan had winning records while Thailand scored their first win of the tournament. Brazil finished with a losing record though as they have three losses already in the 2017 FIVB World Grand Prix.

Behind a stellar serve and block, Serbia took down the pool-leader coming into the day in Thailand to win the group themselves.

The first set was all Serbia, as Brankica Mihajlovic (20 points) made his presence felt early. Beyond his attack (14 kills), he also blocked five shots and recorded an ace in the match – all indicative of Serbia’s advantage on the day. They had nine more kills than Thailand in addition to stuffing nine more shots (14-5 in blocks) and rifling nine more aces (10-1).

In set two, Ajcharaporn Kongyot (13 points) and Pleumjit Thinkaow (12 points) came up big, but Serbia rolled through the third again, with the widest margin of any set. Seven different Serbian’s had eight or more points in the match, as the balance again propelled the European side to a four-set victory.

“For the second weekend in a row we’ve taken first place, and of course I’m very happy about this,” Serbian head coach Zoran Terzić told FIVB after the match. “This is definitely a big success for us. About today, it was we expected. Thailand plays different volleyball than us, but we played well tactically, and for the game – except maybe some time in the second set we did not play not so well – but for the rest of game we played on a good level that let us win 3–1.”

Serbia is now sitting pretty with a 5-1 record and 15 points. They haven’t quite clinched a spot in the final six yet, but should be able to do so early next week when they join Pool G1 with Russia, Japan and China.

For Thailand, although they lost today they still come out of the weekend knowing they struck their first win of the tournament. That’s good enough for 10th in the Group 1 standings as they’ll look to add to their cushion above relegation next week in Pool H1 with the Dominican Republic, Turkey and Italy.

In a match that Japan almost blew a 2-0 set lead and in which Brazil totaled more overall points through the sets, it was Japan who squeaked out a victory over the South American side.

Japan was a bit better in attack, laying down 71 kills to Brazil’s 66. They also played more of an error free match, recording five less. Behind four different players who scored 15 or more points, the Asian side gained a 2-0 set lead in a pair of tight games.

Brazil bounced back by winning the third and fourth by the largest margins of any of the five sets. They were fueled by a dominant block that featured 22 block points to Japan’s nine. Adenizia Da Silva (11 points) was at the forefront with six blocks while Tandara Caixeta (17 points) and Rosamaria Montibeller (19 points) led the attack with 17 and 15 kills, respectively. Ana Carolina Da Silva (12 points) also put down five blocks after not being inserted until the third set, when Brazil started rolling.

However, in the fifth Japan responded. In a close final game, Japan pulled the match out by winning in extra points, 17-15. Risa Shinnabe (22 points) and Sarina Koga (21 points) were prevalent all match for Japan as the top two in the match in points threw down a combined 40 kills on 103 swings.

“After this loss its hard to analyze our game today,” Brazilian captain Natália Pereira told FIVB post-match. “Our first and second sets weren’t good, but we tried to do our best. We just couldn’t defend well, and we couldn’t handle their spikes. Our motivation was improved on yesterday, and I think our level was good – but Japan was just better today.”

Brazil ends up with a losing record in the pool, and now sits at 3-3 overall. It’s already the first time since 2010 that Brazil has lost three matches in the FIVB World Grand Prix, putting them in a difficult situation on the outside looking in of the final six. They will need to pick up their play next week when they join Belgium, Netherlands and USA in Pool I1.

It’s another winning week for Japan, who have now gone 2-1 in each pool. They finished second in Pool D1 and rank sixth – just good enough for the playoff round in a few weeks – overall in the Group 1 table. They’ll look to cement themselves into the final six next week when they conclude pool play in Pool G1 with China, Serbia and Russia.