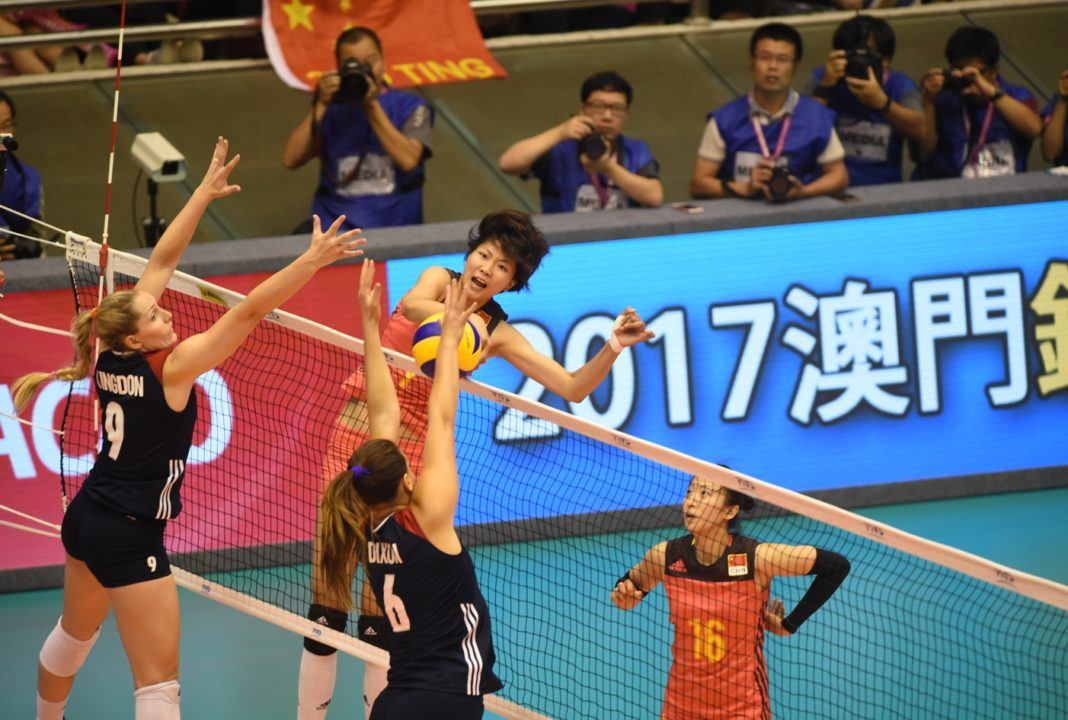 The United States Women’s National Team couldn’t overcome China for a second time in as many weeks as they dropped their second straight five-set match. The win looms large for China and their final six chances, while the United States remain in good positioning but will need to pick it up next week.

In the other match, Italy clinched the Pool E1 crown by sweeping Turkey. That concludes the perfect 3-0 week for Italy while Turkey finished winless in the second week of the 2017 FIVB World Grand Prix.

After falling in five sets yesterday to Italy, Team USA could not comeback today with a win as China got revenge from last week’s meeting.

Right out the gates China got a big boost with Zhu Ting starting the match. The Chinese captain had been a super substitution of sorts as the team has been resting her throughout matches following a busy club schedule. In this one though she started and played the entire match en route to 19 points (16 kills, two blocks, one ace). It was enough for China to win a tight first, 27-25.

The United States came back in the second set to win it 25-23, but would drop the third to fall behind 2-1. They had a big three of Madison Kingdon (23 points), Kelly Murphy (22 points) and Michelle Bartsch-Hackley (21 points) who logged over 20 points and combined for 59 kills. At the very least, they were able to push things to a fifth set and secure at least a point from the match.

That’s all Team USA would garner, as China would win the fifth, 15-11. Beyond Ting, Yuan Xinyue (21 points), Gong Xiangyu (19 points) and Yi Gao (14 points) scored in double-figures for China. The Americans totaled seven more kills (76-69), but their Asian counterpart won in blocks (15-8) and aces (6-5) while logging five less team errors.

“I am very happy with today’s victory against a very strong USA team,” Chinese head coach An Jiajie told FIVB after the match. “This weekend Zhu Ting has done a great job recovering after every match, and this is extremely critical for us as we prepared to combat the fast-paced and highly-intense playing style of the USA team. Overall I think we improved a lot in our attack and defense and our spikers and middle-blocker did a tremendous job. However, we still need to work on our reception as shown by our performance throughout the weekend.”

China ends the week at 2-1 and is now 4-2 overall. That’s good enough for fifth in the overall standings. They’ll finish pool play up next week with Japan, Russia and Serbia as part of Pool G1.

For the U.S. Women’s National Team, they’ll need to regroup after two straight losses followed a 4-0 start. The good news is they’ll have a little less than a week to do so before they join Netherlands, Belgium and Brazil in Pool I1. The match with the Dutch will feature two of the top three in Group 1, as the United States are still in that first trio with a 4-2 mark and 13 points.

Italy dominated seemingly every facet of the match with Turkey in a sweep to win Pool E1 and finish the weekend undefeated.

The Italian side had 18 more kills (44-26), five more blocks (9-4), three more aces (8-5) and two less team errors in the win, as they dominated the first and third sets, with a strong 25-20 win in the second sandwiched in between. Three Italians finished with double-digit points: Cristina Chirichella (14), Miryam Fatime Sylla (13) and Paola Ogechi Egonu (12). Only Hande Baladin (10 points) scored past single-digits for Turkey in the loss.

“In terms of our team’s performance we played even better today than in the last two days,” Italian head coach Davide Mazzanti told FIVB after the win. “The most important thing for us is that we managed to cut out some of the mistakes, and to win this leg in Macao has significantly improved our chances of qualifying for the Finals.”

Italy’s now riding a four-match winning streak after starting the tournament at 0-2. They went 3-0 this week to win Pool E1 and are now in positioning to make the final six with one week left of play. They’ll join Pool H1 where they will see the Dominican Republic, Thailand and kick things off in a rematch with Turkey.

For the Turkish side, they’ll see the same group of teams in Pool H1 with Italy. They’re in 11th to end this week, so they’ll be looking for a win to keep them distanced from that relegation spot in last.