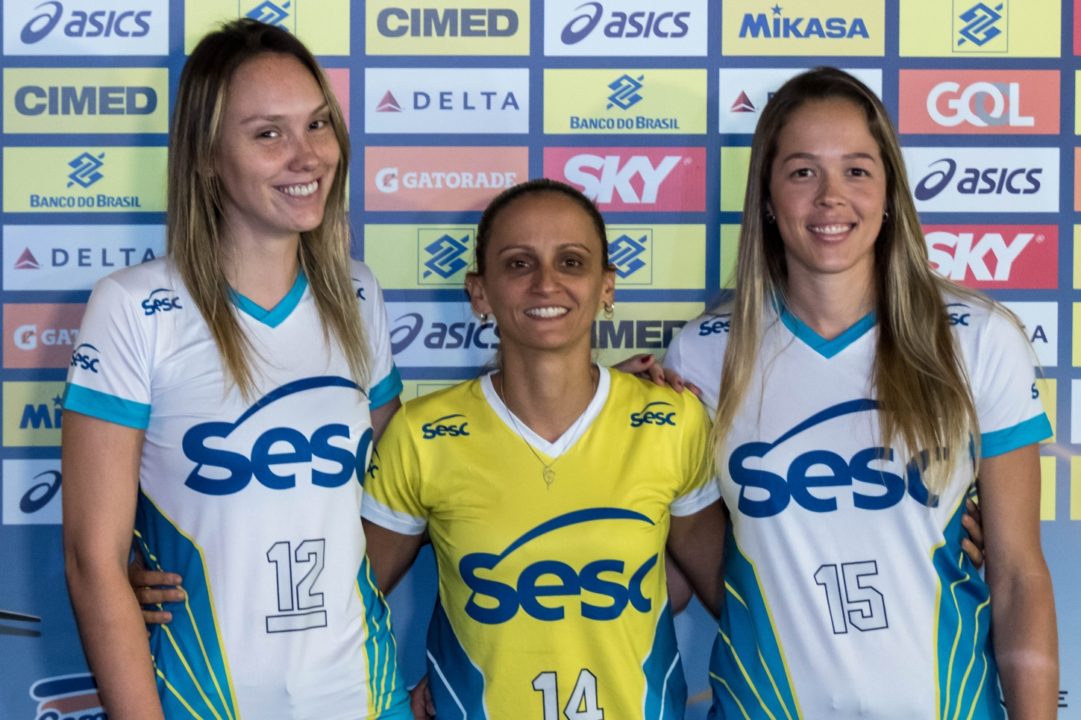 Superliga has now reached its halfway point. The eight best teams up until now will go on to face each other in the Brazilian Cup. Also, Tifanny Abreu became the first transgender woman to play in a Superliga game. Current Photo via CBV

Superliga’s double round robin tournament has reached its halfway point. Every team has played each other once, and now the second half of the tournament will begin, as teams will go on to face each other again. In the Brazilian Superliga this is an important stage of the season, as the 8 best classified teams on the standings up until now will on to compete in the Brazilian Cup in Dec-Jan.

The highlight of the round was SESC x Osasco, one of volleyball’s biggest derby matches. Both tams have faced each other in Superliga finals a record breaking 11 times, making it one of the sport’s biggest rivalries. As is tradition, this was the season’s most awaited game by fans.

When she took the court for Bauru, Tifanny Abreu became the first transgender woman to participate in a Superliga volleyball match. She came out of the bench to score 15 points on 14/35 (40%) hitting and one block.

Nicole Fawcett is quickly blossoming into Uberlândia‘s most potent offensive weapon. She scored 19 points in this round to go along with 6 blocks and 1 ace. If she keeps this up, Team USA coach Karch Kiraly will have no option but to consider her return for the American National Team.

Meanwhile, Destinee Hooker, who is trying to find her best shape for Minas, suited up for her game against Valinhos, warmed up, but was ruled out of the match before it began with intestinal discomfort.

This round saw teams battling for position for favorable seeding for the Brazilian Cup. The last remaining spot was decided in the round’s very last match, as São Caetano beat Bauru in a tough tie-break to get the last minute spot. Bauru, who is going through a deep crisis after investing heavily in its roster in the off-season, will have to watch the Cup from home.

Although SESC’s victory at the derby against Osasco was nice, fans are treated to at least two of those matches every season. In addition, even, SESC’s win or potential loss would not change playoff berthing for the Brazilian Cup, as regardless of the result, SESC would still classify at the 2nd spot and Osasco at the 3rd spot.

That is why this week we are honoring São Caetano. Once a powerhouse in the past, holding the distinction of being the only team to participate in every Superliga season so far, São Caetano is not in its better days recently, constant fighting against relegation through the season. This year, however, it is overachieving. With its very modest roster, it managed to beat Bauru in a tie-break war, a team with a far higher financial investment, and secure the 8th spot in the standings. This means São Caetano will go on to play on the Brazilian Cup, while Bauru will have to watch it from home.

Here are VolleyMob we value players who perform in clutch situations. This is just what youngster Sonaly Cidrão did, as she took São Caetano‘s Brazilian Cup fate on her shoulders and carried her team to an improbable win against Bauru. She had 23 points in the game, outshining teammate, and national teamer, Fernanda Tomé.

The tournament will run from mid December to mid January and will be contested in a knock out format. The following teams will face against each other, with schedule still to be determined: