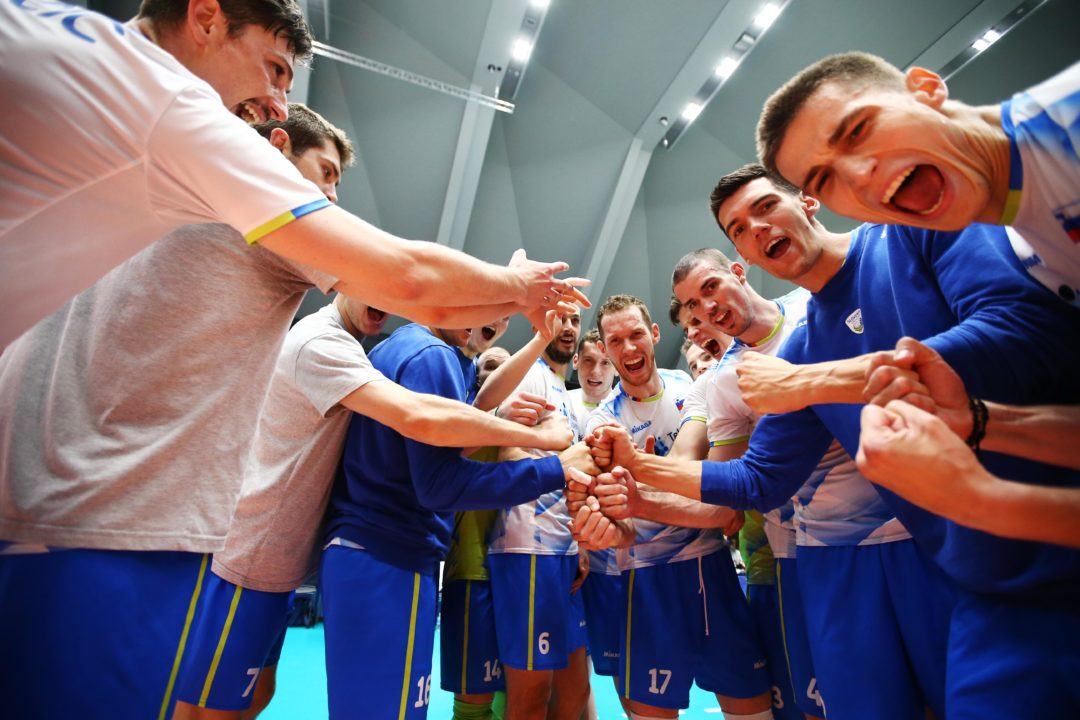 Slovenia got 2 of the maximum 3 points in a 3-2 win over South Korea on Friday in pool E2. Current Photo via FIVB

The home team Japan picked up maximum points on Friday and the group leaders Slovenia pulled out a 3-2 win over Korea as Pool E2 opened up play on Friday in Takasaki, Japan.

With the win, Japan vaults into the top 6 of the Group 2 standings and put themselves in position to qualify forward to the Final 6 that will be hosted in Australia at month’s end. Slovenia, meanwhile, held its grip at the top of the table after Slovakia, the other 3-0 team in week round of play, lost its opener in group D2 on Thursday.

Friday’s opener in Takasaki saw a wild back-and-forth match between group leaders Slovenia and South Korea, with the two teams trading sets throughout the match. After winning 2 of the first 3, including an emphatic 25-13 win in the 3rd set, Slovenia looked like it might take maximum points from the match. The two teams paired up in the opening weekend of play in South Korea as well, and that’s how that outcome went – Slovenia took the 1st, Korea took the 2nd, Slovenia hammered away in the 3rd, and carried that momentum to a clinching 4th. On Friday, though, South Korea fought back to take the 4th in extra points and force a tie-breaker that was ultimately won by Slovenia anyway.

Slovenia was led by 23 points (21 kills, 1 block, 1 ace) from Tine Urnaut – which is exactly the same number of points he scored in the teams’ first matchup, though that time it was in 3 sets. Urnaut, the Slovenian captain, sat out the team’s weekend 1 finale, but there appears to be no lingering issue with any injury of any kind.

Still, Urnaut says his team needs to be better, especially in closing-out matches.

“It was a tough match, we played nervously,” Urnaut said. “We allowed our opponents to play better and let them back in the game. We have to be better at closing out our matches. We should have played better. We had some problems in the fourth set. We beat them last week but the reason it was tougher today was because of the way we played.”

“Korea played very well today,” said Slovenian coach Slobodan Kovac. “Their coach Mr Kim has changed the mood and now they are playing more of the European style. We gave them chances because in each set we just stopped playing. Fortunately, we won in the fifth set.”

Korea has shown improvement, as alluded to, from their first matchup, and should continue to do so as they’ve only been with their new coach for a month.

“I am satisfied with the result,” said Korea coach Kim Ho Chul. “We only had one month to train for this competition. We had some mistakes in the match but I am satisfied. We want to concentrate on good serving because that is key to the flow of the game. We didn’t change anything from last week but we used all of the players today.”

Every single player on the 14-man Korean roster saw action in the game. They were led offensively by Kang-Won Lee, who had 16 kills and 16 points.

For the second-straight day, a leading scorer from round 1 was held at bay in a round 2 opener. Turkey’s Metin Toy, who led Group 2 with 67 points in his first 3 matches, was suppressed to a relatively-quiet 14 on Friday by Japan. Toy didn’t start the match, but did start the last 3 sets. (The second-leading scorer in round 1, China’s Chuan Jiang, was held to just 11 points in China’s 3-0 loss to Australia on Thursday.)

Meanwhile, Japan leaned heavily on its starters, who scored all 67 of the team’s offensive points.17 of those came from Issei Otake, as the team scored on 53.5% of their offensive attacks in the game. Masahiro Yanagida had 13 points for Japan, while Akihiro Yamauchi, Yuki Ishikawa, and Haku Ri all had 12.

Japan held Metin and the Turkish offense at bay in part with their best blocking performance thus far of the tournament, recording 9 stuffs against Turkey. Their blocking numbers on the opening weekend were 4, 7, and just 1 in a 5-set loss to Portugal.