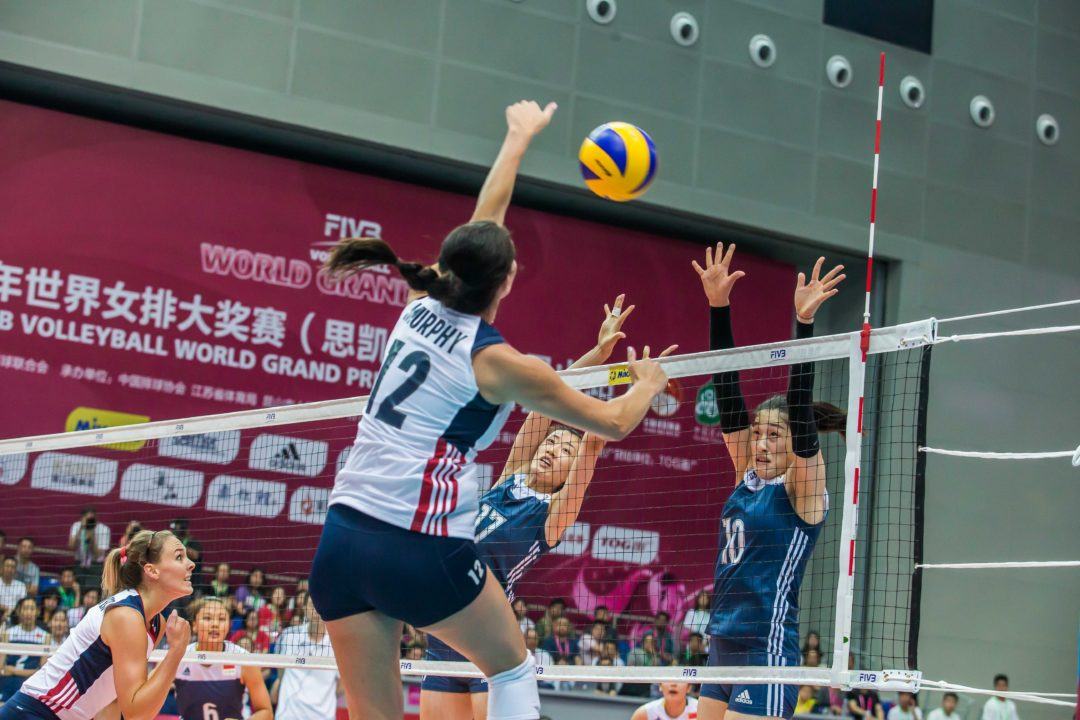 The first week of play for Pool B1 at the World Grand Prix has concluded, with the United States coming out on top with a sweep over Olympic champions China.  Current Photo via FIVB

The first week of play for Pool B1 at the World Grand Prix has concluded, with the United States coming out on top with a sweep over Olympic champions China. The loss puts China in the second place position in the pool, followed by Italy then Russia.

The Italian’s overcame a tough battle against Russia to take their first victory of the World Grand Prix. The match took just over two hours to complete with 1,470 fans in attendance.

Italy jumped out to the quick 1-0 lead in the match with a 25-21 win, but Russia pushed back in the next two sets to take the 2-1 lead. The fourth set came down to the wire for both teams, with the score exceeding the normal stopping point of 25 points, with Italy coming out on top 26-24.

The fifth and deciding set was a near breeze for the Italians on their way to the win, with a 15-10 victory.

Italy’s captain, Cristina Chirichella said, “Every set in this match was difficult for us today, but no one gives up. We just try out best to win the match and we made it happen. Glad to win.”

Leading the Italian offense was a dominant presence from Paolo Ogechi Egonu who scored an impressive 39 points in the match, with 31 kills, three blocks and five aces. Lucia Bosetti added another 16 points in the victory on 14 kills and two blocks while Anna Danesi contributed 10 after being subbed in the first three sets of the match.

For Russia, Irina Voronkova scored 25 points, all on kills in the loss, while Iuliia Kutiukova added another 14.

China is still missing Zhu Ting, who is sitting out of the World Grand Prix due to a tough schedule and being fatigued. The absence of their strongest player proved to be a detriment to the team in the first week of play, as they dropped their final match of week one to the United States in straight sets.

The win for the United States puts them in first place in the pool with 8 of the 9 points they could have scored this week. China now sits in second place with a 2-1 record and five points.

The United States used a similar lineup in the match, with the addition of Justine Wong-Orantes as the team’s main libero in the match. Kelly Murphy stepped up for Team USA, putting down 19 points on 16 kills and three blocks in the win, while Tori Dixon added another 13 points on 11 kills and two blocks.

For China, Jing Li and Xiaotong Liu each put down 12 points while Xiangyu Gong added another 11 in the loss.