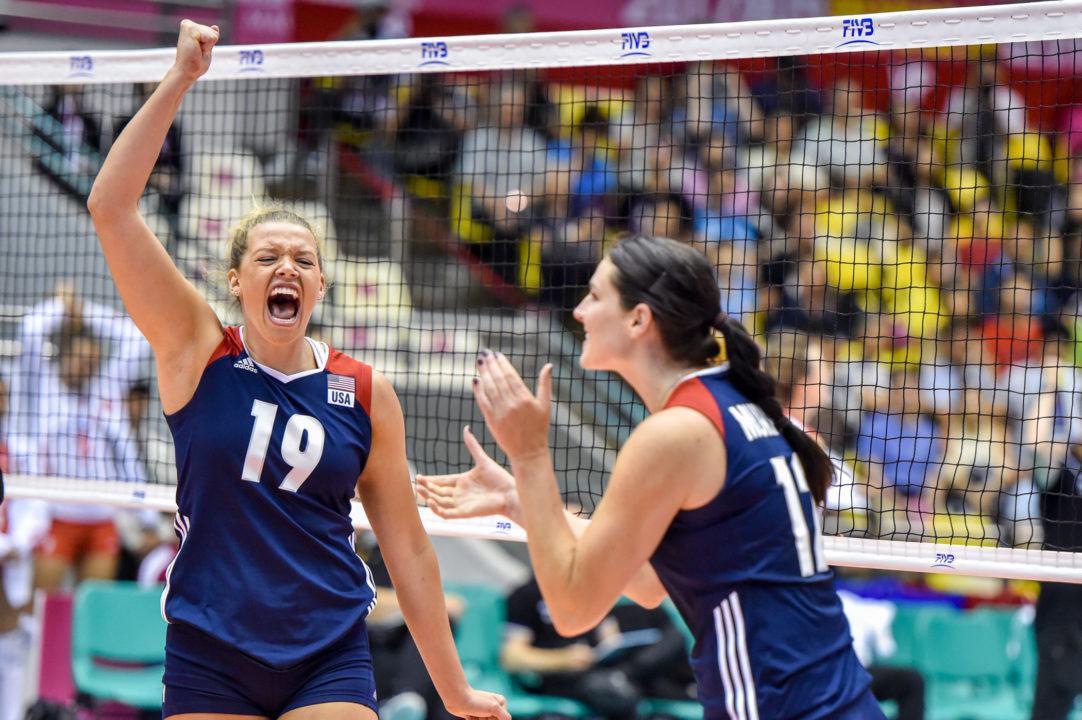 Team USA and Italy took down their opponents on the first day of week two in the World Grand Prix. Current Photo via FIVB

Team USA and Italy took down their opponents on the first day of week two in the World Grand Prix. Italy sits atop the U.S. squad in a points differential, as they swept China in three while Team USA needed four sets to win against Turkey.

Team USA used powerful attacks and a strong serve to take down Turkey in four sets. The U.S. led in attacks 48-36 and 10-2 in service aces.

The first set of the match was a tight battle, with the scored tied up at 12 all mid-set, a string of bad plays on the Turkish side of the net led to Team USA taking the 19-16 lead. They managed to hold on to the lead to take the first 25-21. Turkey raced out to an early 6-2 lead in the second set, but the U.S. was able to catch back up, making the remainder of the set a back and forth battle, with Turkey coming out on top 26-24. The remaining two sets were all Team USA, as they took the third set 25-19 and the final set 25-12.

The U.S. used nearly the same lineup as week one, with Michelle Barsch-Hackley, Madison Kingdon, Tori Dixon and Kelly Murphy headlining for the team. Captain, Carli Lloyd, started the first two sets as setter, but Karch Kiraly changed things up for the remaining two sets, giving Micah Hancock a shot at the position. In the libero spot, Justine Wong-Orantes started over Amanda Benson.

Turkey had low offensive output in the loss, with Melis Durul putting down nine points in the win to lead the team.

Bartsch-Hackley put down 17 points in the win on 11 kills, two blocks and four aces while Kingdon added another 12 points, all on kills. Dixon and Murphy each contributed 11 points in the win.

Italy dominated on the attack to take down China in three-sets, with a 50-33 attack advantage.

Italy jumped out to 1-0 lead in the match with a 25-19 first set win. They continued with the momentum they gained in the first to take the second set, followed by the third to stun China on their home turf in three.

Italy was led by Paola Ogechi Egonu who contributed 21 points in the win with 19 kills, one block and one ace. Miryam Fatime Sylla and Raphaela Folie each added another 12 and 11 points, respectively.

This week, China is with their star player Zhu Ting, who sat out for the majority of week one due to fatigue. Entering in only the final two sets of the match, Ting led the scoring along with Xiangyu Gong who each had 10 points in the losing effort.