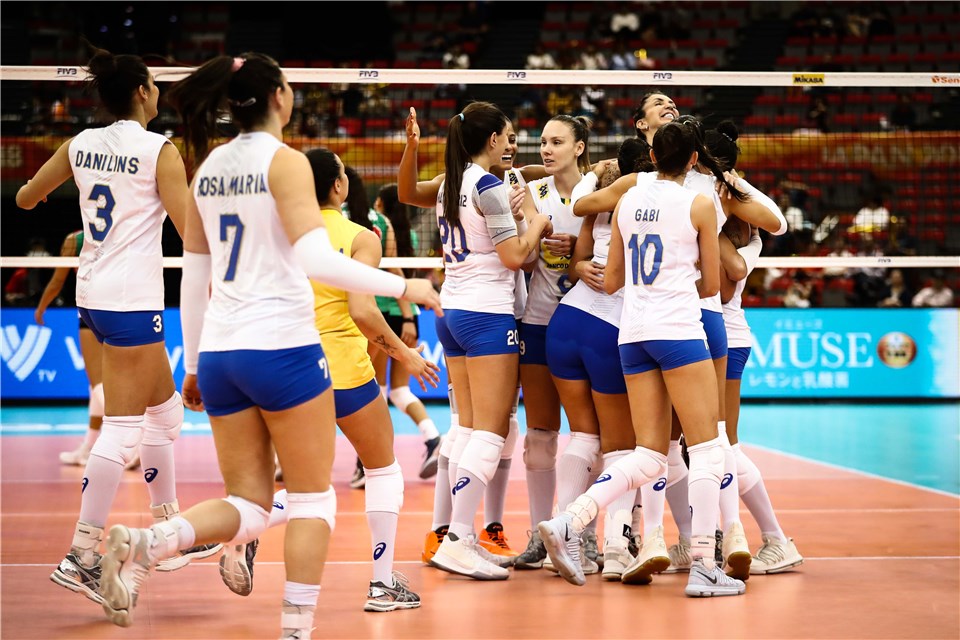 Brazil bounced back from a five-set upset to Germany with a four-set win over Mexico, meanwhile the Netherlands and Serbia stayed perfect on the tournament with sweeps of the Dominican Republic and Germany.  Current Photo via FIVB

Brazil bounced back from a five-set upset to Germany with a four-set win over Mexico, meanwhile the Netherlands and Serbia stayed perfect on the tournament with sweeps of the Dominican Republic and Germany. Japan registered its fifth straight victory, topping Puerto Rico.

“Today it was obvious that we were missing the killer instinct,” German captain Maren Fromm said. “In the third set we were there until about 20-20 then they had another gear. This will help us grow and learn.”

Germany served up eight aces, but it was not enough to overcome 17 miscues and a dominant Serbian effort at the net on Monday.

Tijana Boskovic piled up 17 points, all on kills, and Brankica Mihajlovic added 15 (14 kills, 1 block) for Serbia. Milena Rasic chipped in 13 points on nine kills and a team-best four blocks, while Maja Ognjenovic served up three of the team’s four aces.

Germany utilized 11 players in the loss, but could not find an answer. Louisa Lippman and Jennifer Geerties managed double-digit scoring efforts to pace the team. Lippman posted 11 points (7 kills, 3 aces, 1 block), while Geerties added 10 points on five kills, a team-best four aces and a block. Ivana Vanjak was tops offensively with six kills.

Germany grabbed a 9-7 advantage in Set 3, but Serbia turned the tables and claimed a 12-11 lead on a stuff by Bianca Busa. The Germans fought back to go up 16-13, but Serbia scored eight of the next nine to go ahead 21-17. Boskovic finished off the sweep.

“It was important to play today’s game because we have not had that many high-level games since the start of the tournament,” Serbian coach Zoran Terzic said. “They pushed us. The first two sets we played well but in the third set our concentration dropped a bit. We were able to come back and win.”

“This was a bit different game,” Brazilian coach Jose Gulmaraes said. “They have three excellent servers. Some of the balls were wobbly and they had jump servers. They disrupted our reception. The game changed when Drussyla (Costa) came on and helped us on defense. They are a team with character and qualities. Now we will prepare for Holland next.”

Tandara Caixeta turned in 25 points with 23 kills and two blocks. Gabriela Guimaraes (15), Drussyla Costa (14) and Adenizia Da Silva (10) followed. Costa came in as a sub in Set 1 and started the rest of the match for Natalia Pereira. Brazil also switched setters after Set 1, bringing in Roberta Silva Ratzke for Danielle Lins.

Andrea Rangel piled up 23 points, all on kills, for Mexico and Melanie Quintero added 17 (14 kills, 2 aces, 1 block), but it was not enough to contend with the powerful Brazilian attack.

It took more than a set for Brazil to find its form as Mexico started strong out of the gate, going up 8-5 and pushing ahead by six at 20-14. The Brazilians cut the margin to one at 21-20 and thwarted two Mexico set-point tries before falling 25-23 on a Rangel kill, her ninth point of the stanza.

Mexico boasted an 8-7 lead in Set 2, before Brazil kicked into gear and took a 16-13 advantage on a Caixeta putaway. Mexico rallied to tie it up at 23, but Brazil scored the final two points, the last on a Caixeta kill.

The teams were separated by just one point in Set 4 at 12-11 and 15-14 but Brazil maintained the slight advantage. From there it was nearly all Brazil as the team wrapped up the win at 25-19 on a Thaisa Daher de Menezes stuff.

“It was a good match,” Mexico coach Ricardo Naranjo said. “We could have won the second set. From the third set their experience showed. I’m satisfied with how we fought on every point. All of our players gave everything they had. There was a difference in intrinsic levels from the third set. They showed their competitiveness and strengths. It was great for us to get to compete against such a top team in the world.”

“I’m proud of our team; we have gotten better with every match,” Dutch coach Jamie Morrison said. “The Dominican Republic is a good team and if you let them back in the match it they will be tough. We put pressure on with our serve, attack and reception and were able to put the match away in three sets.”

Yonkaira Pena Isabel posted 10 points for the DR with eight kills, a block and an ace. Lisvel Mejia and Brayelin Martinez added five kills apiece, while Mejia put up a team-best two blocks.

Sloetjes came through in the clutch in Set 1, lifting the Dutch to a 25-19 victory.

The Dutch pushed ahead 8-3 in Set 3 and doubled its lead to 16-6 as the Dominican Republic failed to keep up defensively, eventually falling 25-14.

“It was not a good game for us today,” Dominican Republic captain Bethania De La Cruz said. “We didn’t play aggressive enough. We will prepare now for the next match.”

“We were reminded of the high technical capacity of Japan tonight,” Puerto Rican coach Jose Mieles said. “They only had 10 errors in the match, while we had 29. It is difficult to win like that. Japan is quick and that caused us to make many mistakes. We will do our best in the remaining two matches.”

Puerto Rico boasted an 11-5 lead in blocks, but committed 25 errors in the match to eight by Japan. The Japanese also boasted a 42-33 lead in kills.

Japan wasted no time staking its claim on the match, going up 12-6 in Set 1 and continuing on to a 19-11 edge. Puerto Rico charged back to within four at 22-18. Japan called timeout and won the stanza on a Risa Shinnabe putaway.

“We got three points today,” Ishii said. “Our play was not high in perfection. We must correct and adjust our game for Serbia. We hope to do well from the beginning in the next.”