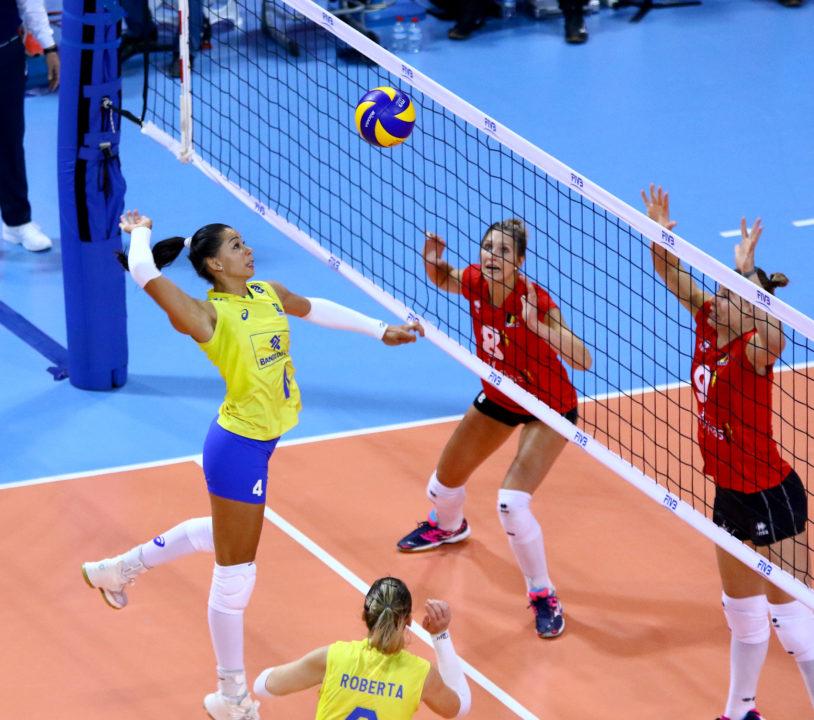 Carol had 8 kills and 5 blocks for Brazil. The team expressed disappointment with their performance in spite of a sweep. Current Photo via FIVB

Two heavyweights, Serbia and Brazil, warmed up for their big Saturday showdown with 3-0 sweeps on day 1 in Ankara. For Serbia, that meant beating the host team 3-0, and for Brazil it was a similar sweep of Belgium. Serbia only gave up 51 points to Turkey, while Belgium fared a little better, scoring 63 points against Brazil.

The defending Olympic silver medalists Serbia got their tournament underway on Friday with a 3-0 thumping of Turkey. Turkey didn’t come into the tournament with much confidence after being beat pretty handily by Brazil in two friendlies earlier this week in Istanbul, and they didn’t fare much better against Serbia. Their 51 points was the fewest scored by any team on Friday in group 1.

Serbia, in spite of the comfortable victory, stuck to their starters for most of the match – using an opportunity to gel as a team before playing Brazil on Saturday. Brankica Mihajilovic led all players with 18 points in her followup performance after being named the best outside hitter at last summer’s Olympic Games. She was one of three Serbians in double figures – joined by Ana Bjelica (12) and Jovana Stevanovic (13). Stevanovic and Mihajlovic hit 57.14 and 56.25%, respectively – part of an overall 47% attack success rate for Serbia.

“We are very satisfied with the victory today,” Serbian coach Zoran Terzic said. “Honestly, I was not expecting it to be so easy. We won by 3-0 in Ankara, at their home. I know the Turkish team very well. They play much better in front of Turkish spectators. But we played very well today.”

Turkey’s highest scorer, Polen Uslupehlivan, only had 7 points – and didn’t even start 2 of the team’s sets. They were out-blocked 8-3. In spite of their struggles in the blocking game and just a 28% hitting percentage, they did put down 4 aces, and only gave away 19 points on errors (Serbia gave away 16).

“To be honest we could not give our best today,” said Turkish captain Fatma Yildirim. “Serbia are a very strong team. They played very dominantly today. We still have nine more matches ahead of us. We want to be better prepared for these next games and win.”

Serbia plays Brazil in the early game on Saturday, while Turkey will play Belgium in a bid to avoid the bottom of the table.

Brazil used a balanced offense and 15 blocks to overwhelm Belgium to open their title defense on Friday.

Carol (Ana Carolina Da Silva) led the defensive wall with 5 kill blocks in just 3 sets of play. Roberta Ratzke and Ana Beatriz Correa (Bia) also had 3 each. Brazil’s margin on the block was 15-3.

Rosamaria Montibeller led Brazil offensively with 9 kills, while Tandara Caixeta had 9 and Carol had 8. That’s one opposite, one outside hitter, and one middle blocker combining for 27 of Brazil’s 42 kills.

Belgium, a very young and inexperienced team, actually looked more comfortable in the early sets than the nervous Brazil. They only lost the first two sets by a combined 5 points. By the 3rd, however, Brazil was rolling.

“First of all, the most important thing was the victory,” Brazilian captain Natalia said. “We got 3 points. But we know we need to play better in the next games. Congratulations to the team on this victory.”

Brazil only landed 42% of their attacks in spite of the sweep, and had 12 hitting errors.

“We were a little bit nervous in the beginning,” said Brazilian coach Jose Roberto. “We made many mistakes in the attack. Our blocks helped us. 3-0 is a very important score to begin.”

“I have to congratulate Brazil,” said Belgium’s coach Gert Vande Broek. “They did a very good job. I’m also proud of my team because we’re not with a full team here. We didn’t have any stress today, we played with our hearts. I think we showed nice volleyball for the supporters.”

Belgium had one player in double figures, captain Freya Aelbrecht, who scored 12 points while landing 10 of her 15 shots. She was the most efficient player of either team in the match. in that category.