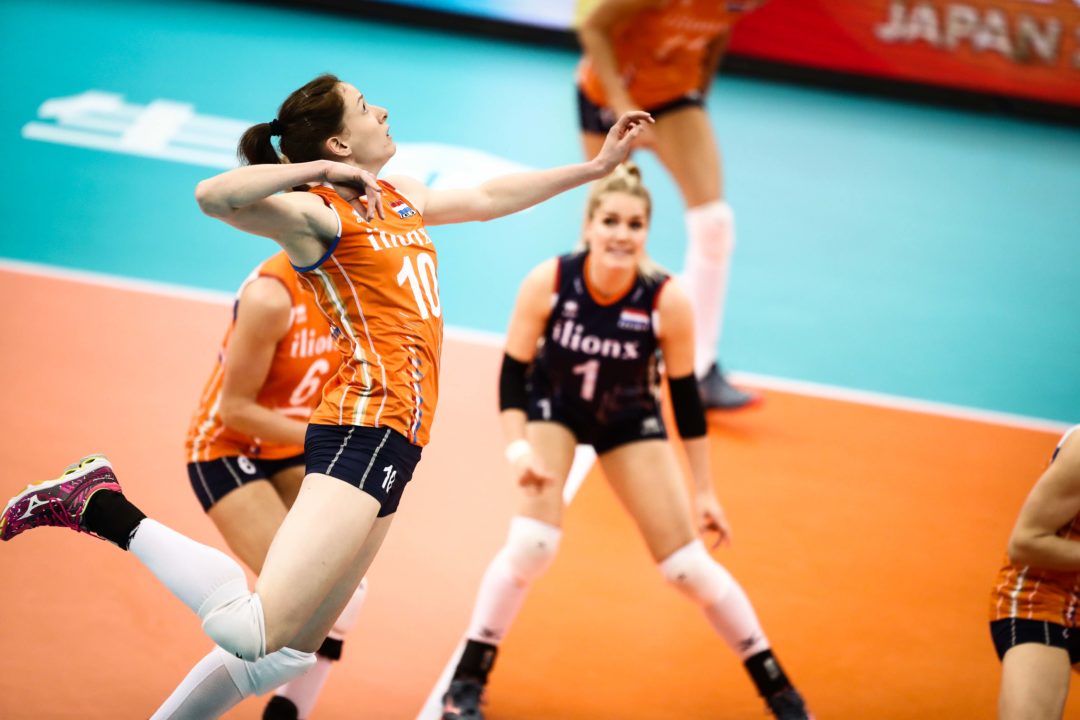 The Netherlands and Japan did what they needed to do to cement their spots in the World Championships Final Six and then some, each leapfrogging Serbia for the top two spots in Pool E.  Current Photo via FIVB

The Dutch ended Round 2 in first place with an 8-1 record, sweeping Serbia. Japan lost to Brazil, but took the match five sets to gain the point it needed to move past the Serbian into second place.

In the final two matches for pride, the Dominican Republic swept Germany and Puerto Rico topped Mexico in four sets.

“The Netherlands played really well,” Serbian coach Zoran Terzic said. “It’s not a problem to lose the last two games, but it is in this manner. Practically we didn’t play. I think the players will change their minds and play better in the final six.”

“We were missing the energy we had at the beginning of the tournament,” Ognjenovic said. “We hope to get it back for the last six. We should be satisfied after seven wins in a row, so losing the last two is not that bad. We will now get ready for the last six.”

With Tijana Boskovic out of the lineup with an abdominal injury, the Serbians turned to Brankica Mihajlovic, who posted 10 points (6 kills, 2 blocks, 2 aces). Milena Rasic (8), Ana Bjelica (6) and Jovana Stevanovic (5) rounded out the scoring. Rasic put up a team-best three blocks, while Bjelica downed five kills.

The Serbians finally returned to form midway through Set 3. After trailing 8-3, Serbia clawed back to within one at 15-14 with help from a 4-0 push. The Dutch recovered to go ahead by five at 23-18. Sloetjes tooled the block to seal the 25-20 victory and give the Netherlands first place in the group.

“We are happy to win, but know Serbia can play much better,” Sloetjes said. “It was important for us today to win one set. After that we relaxed and got into a rhythm. We played a solid game. We are happy to be in the last six and may see Serbia against in the last round.”

“We are going to round three with a chance to win a medal,” Japan coach Kumi Nakada said. “Our play was far from satisfactory today. We will now proceed to the next round and concentrate on that.”

Brazil used a 15-6 lead in blocks to rally past Japan for a five-set win to close out its stay at the World Championships. The Japanese outscored the Brazilians 108-107 including 65-65 lead in kills, a 7-6 edge in aces and 30 points off Brazilian miscues (to 22 of their own).

Japan scored eight of the final nine points in Set 1 to win 25-23 and secure its spot in the Final Six.

The Japanese carried the momentum into Set 2, going up 7-3 and holding off a midset Brazilian rally to win 25-16 on a foot fault.

Brazil turned the tables by going up 7-2 in Set 3. Japan tied it up at 8 and went on to lead by three at 21-18 and later 24-21. Brazil scored four in a row to thwart three match-point tries and earn one of its own as Caixeta tooled the block. Japan had another match-point attempt at 26-25, but a Fernanda kill, a Gabi stuff and a reception error kept the Brazilians in the match with a 27-25 win.

Japan held the early advantage at 5-3 in Set 5, but a Caixeta kill put Brazil up 8-7 at the changeover. A Guimaraes kill gave the South Americans a match-point try at 14-9. Caixeta tooled the block to seal the 15-11 win as Brazil exited the tournament with a seventh-place finish.

“It was a tough match. We had to win in three sets,” Brazil coach Jose Guimaraes said. “It was a difficult situation and a difficult challenge. The first set was close but we could not win. Our players did not give up. We gave our best effort. We learned many things here. Japan volleyball is important in the world and they played well. Our players sacrificed time with their families to be here and I am proud of them.”

“We are happy to end with a win,” Puerto Rican captain Natalia Valentin said. “It’s too bad we got our rhythm late in the tournament. They pushed us with serves and attack. Our passing and offense was the key to the victory.”

Daly Santana and Karina Ocasio turned in 18 points apiece, while Stephanie Enright (13) and Ana Sofia Jusino (10) also contributed double-digit scoring efforts for Puerto Rico. Santana downed 17 kills, while Ocasio added 16 and Enright posted 10. Jusino added in six kills, three blocks and an ace. Santana was the only started without an ace to her credit.

Angela Rangel scored a match-high 24 points for Mexico (22 kills, 2 blocks), but it was not enough. Samantha Bricio also chimed in with 16 points (12 kills, 2 blocks, 2 aces). Mexico used just one substitute in the match.

“It was a tough match for us,” Rangel said. “We didn’t have our rhythm until the end. We won the third set, but could not play our volleyball in the fourth set. We can learn from this experience for the betterment of our play.

“We feel happy with the win,” Dominican Republic coach Marcos Kwiek said. “The matches with Germany are always close. It was a high-tension match and fierce. Our block and defense worked intensively today. It was important for us to finish the world championships with a match like this. We had good service today. We could have done more in this competition, so we will go home and practice more.”

A strong performance at the net led the Dominicans to victory. The DR led 47-32 in kills and 8-2 in blocks. Seventeen German errors also aided the team (to 11).

Louisa Lippmann notched 14 points, all on kills, for Germany. Lena Stigrot was next on the team with six points (5 kills, 1 ace). Captain Maren Fromm played in just the first two sets, finishing her final match with three points.

“I’m proud of my team, but the Dominican Republic deserved to win,” German coach Felix Koslowski said. “We wished to finish with a victory but they played well.”