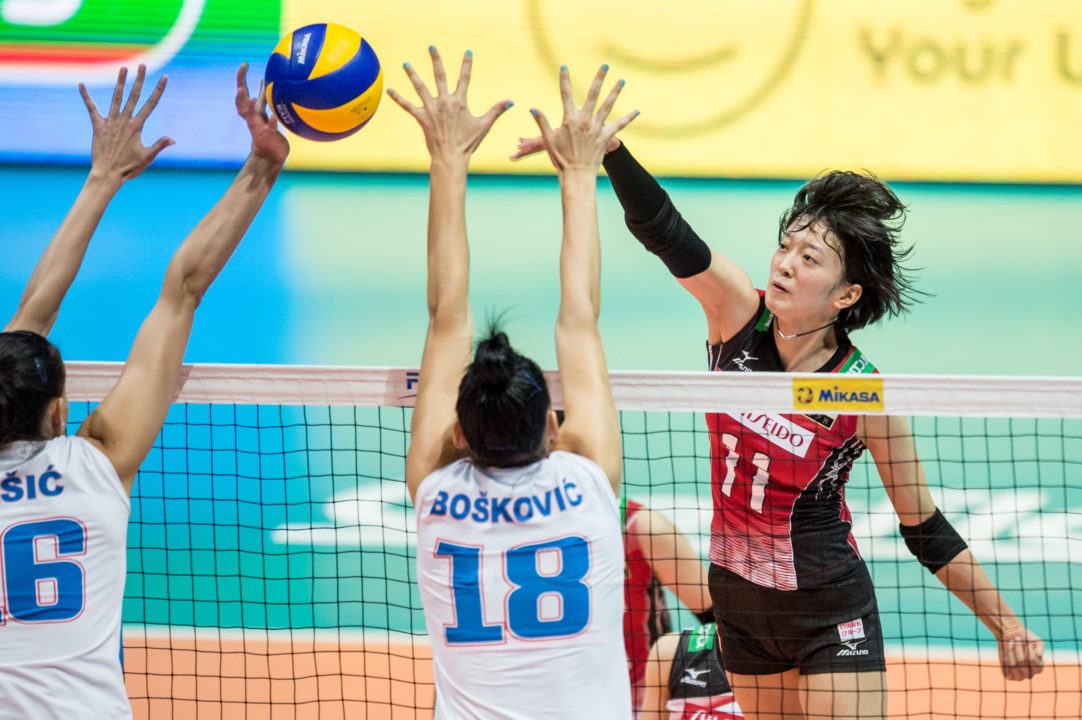 Japan followed the lead of Yurie Nabeya as it rallied to score a five-set upset of Serbia, while Russia came through with a four-set win over China with help from a pair of 20-point efforts.  Current Photo via FIVB

Japan followed the lead of Yurie Nabeya as it rallied to score a five-set upset of Serbia, while Russia came through with a four-set win over China with help from a pair of 20-point efforts.

Japan rallied from down 2-0 to upset Serbia in pool play on Saturday as Yurie Nabeya registered 26 points, including a match-high 22 kills. The win increases Japan’s chances of moving up the rankings, but Serbia has already secured its spot in the Final Six.

Serbia led Set 1 throughout and had built a 16-9 lead midway through Set 2 en route to victories. Japan adjusted at the break and took advantage of Serbian miscues in Set 3 and stole away the 25-23 win with five of the final six points. The Japanese carried the momentum to a 16-11 lead in a 25-20 Set 4 victory to knot the match at two sets apiece. Serbia led 8-6 in Set 5, but Japan rallied to a 14-12 lead and the victory.

Russia racked up 16 blocks and got 20 point efforts from Kseniia Parubets and Irina Voronkova in a four-set upset of China.

“We doubled the effort when preparing for today’s match against China,” Russian coach Konstantin Ushakov said. “We are happy to take the victory as China are one of the strongest teams in the world.”

“Today we tried a new set of a starting lineup,” Chinese coach Jiajie An said. “I am pleased with their performance as it is normal for them to have errors. It is a good experience for them to adjust their rhythm and improve through competitions. Our blocking did not exert enough pressure on our opponents. I still want to congratulate Russia on the win.”