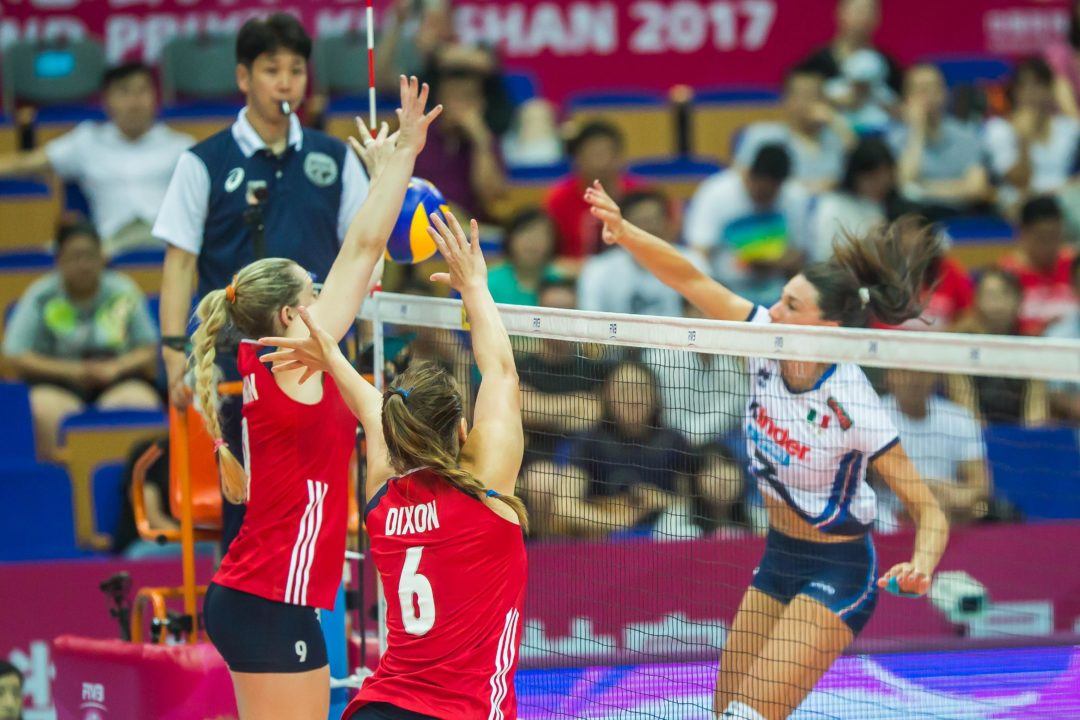 The United States scored a 3-0 win over Italy that has them sitting on top of Pool B1. Current Photo via FIVB

The United States scored a three-point victory over Italy via sweep as China had to go five with Russia (just like the U.S. did yesterday). That means China and USA sit atop the standings – each at 2-0 and with five points – while Russia and Italy are searching for their first win.

The United States came into the day after a five-set win over Russia where they came back down 8-3 in the fifth set. Italy on the other hand fell in four sets to China as they were searching for win number one, but could not find it today.

Behind a more efficient attack, Team USA pulled through for the opening set win, 25-21. In total, although they finished with four less spikes, they had 14 less attack errors. They also out-blocked Italy (7-6) and had two more aces as their advantages helped them build a 2-0 set lead after a close second. The United States pulled away in the third for their biggest set victory at 25-19, giving USA the win, three points and five consecutive sets.

“We know that Italy has a great volleyball system and they form a great national team,” U.S. Women’s National Team head coach Karch Kiraly told FIVB post-match. “I’m proud of my team members that they did a great job to keep pushing them. We make things difficult for Italy. Glad to win the match.”

The Americans had nice balance, as five different athletes had six or more points – Tori Dixon (10), Michelle Bartsch-Hackley (10), Kelly Murphy (nine), Lauren Gibbemeyer (eight) and Madison Kingdon (six). Dixon seemed pleased with her team-high in points, as it was her first full match (and start) back from a torn ACL in major competition.

The captain and setter who distributed all the attacks was Carli Lloyd, who knew the team would need a group effort against Italy.

“Before the match, we knew that we needed to be patient because Italy is a great defensive team,” Lloyd told FIVB. “I’m happy with my team that we did a good job. It’s always fun to play against Italy.”

Team USA will now await China tomorrow in a match featuring the top two teams in the pool. The winner will not only win Pool B1, but will also have another step on advancing past the group stage in a few weeks.

For the Italian side, they may have regrets that they didn’t get Paola Ogechi Egonu in the match earlier. She didn’t appear in the first set and came on as a sub in the second set, yet she totaled a team-high 12 points. She was the only one in double-digit points for the Italians, as Raphaela Folie came close with nine. They’ll now move on to face Russia tomorrow as one team will be guaranteed a first win.

Russia came into the day 0-1, but they led the United States 2-1 in sets and even 8-3 in the fifth yesterday. Today they had a similar opportunity, up 2-1 in sets, and again could not hold down the lead as China came back for the five-set victory.

After a tight first that was won by Russia in extra points, China tied the match up 1-1 behind Jingwen Qian (15 points) and Xiaotong Liu (13 points) in set number two. However, Russia exploded in the third set behind Kseniia Parubets, who led the match in points with 20, for a 25-16 win and a 2-1 lead. In total, six players started all five sets for Russia with four netting double-digit points.

The savior for China was captain and Olympic MVP Zhu Ting. She only stepped onto the court in one set yesterday, and in this match she did not appear until the fourth set as a sub. China escaped set four, 27-25 to force a fifth with Ting in the match. Then, China won another set in extra points, 16-14 to win a wild comeback. Even in just one set as a starter and one coming off the bench, Ting was tied for third on the team with 12 points.

Russia actually totaled more points in the match – mostly due to the third set blowout. They had more spikes (with less errors) and matched China in aces. They’re in a difficult spot now though at 0-2 after losing control of both matches. The good news is they’ve collected two points, more than most 0-2 teams could say. Russia will look to defeat Italy tomorrow to salvage the first weekend.

The one edge for China was their block (10-7 in blocks). It’s a 2-0 start now for China, who are tied with the U.S. at the top of Pool B1 in wins and points, but trail in set ratio. The pool’s winner will be resolved as the two teams meet tomorrow.