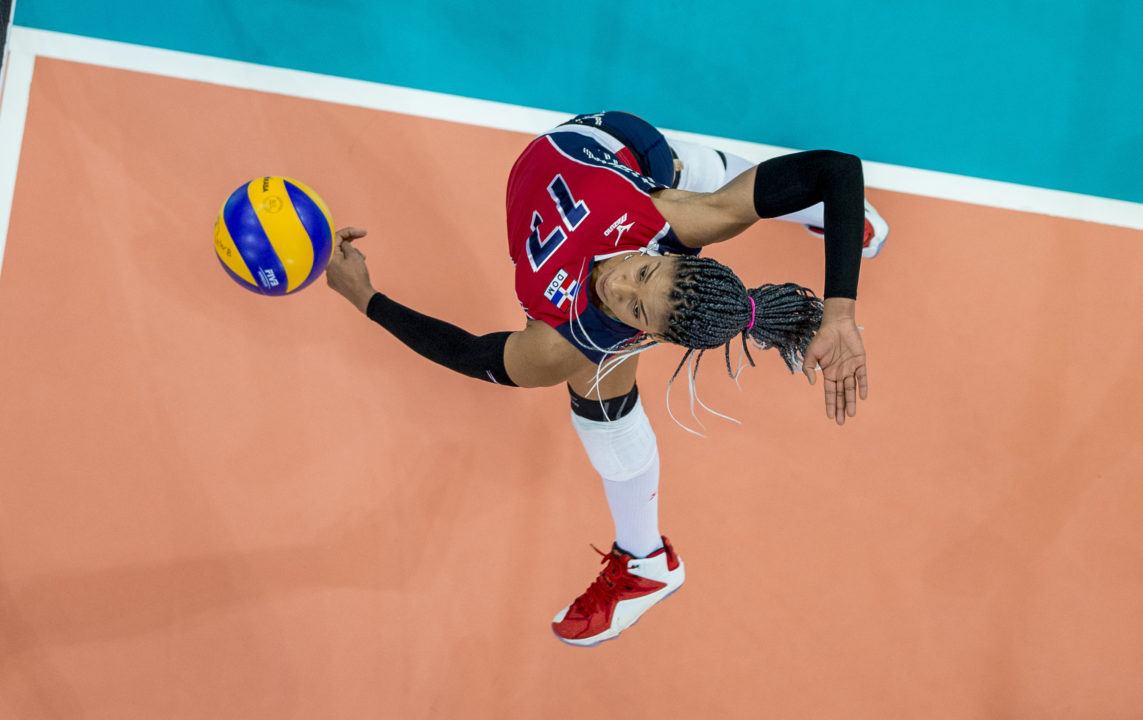 The Dominican Republic, in spite of being in 8th position, have a pretty clear path to the Final 6. Archive Photo via FIVB 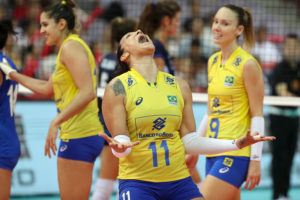 Unencumbered by the FIVB rules, VolleyMob has selected their Dream Team for the 2017 FIVB World Grand Prix.

With just 3 games of play remaining, there’s still a ton up in the air at the 2017 FIVB Women’s World Grand Prix. Teams are vying for a spot in the Final 6 in Nanjing, China. Belgium is already mathematically eliminated, as they can only earn 3 wins in the last weekend, which would move them at best into 7th place.

Every other team is technically still in play, though for one-win Thailand and Turkey, it would take a near-miracle to get in. We’ll assume for now they’re out (though they may not mathematically be so, they’re very, very close).

China, the current 5th seed, is in to the Final 6 as the host team, regardless of where they finish in the table.

That leaves them 8 teams competing for 5 spots: Serbia, Netherlands, United States, Italy, Japan, Brazil, Dominican Republic, and Russia, in that order. The current top 6 cutoff is the line between 4 wins and 3 on the first tie-breaker.

A reminder of the standings procedure:

Win and (probably) in: Serbia and the Netherlands

Neither Serbia nor the Netherlands can guarantee themselves a spot in the Final 6 with one more win, which would be their 6th. But they can get really close. If that one win is a 3-0 or 3-1 win, then they’re in for sure with 18 points. A 3-2 win would leave the door open for the ‘nightmare’ scenario. The Netherlands will face Brazil, the United States, and Belgium in their final three games – including a closer against the winless Belgium. That puts them in the better scenario of the two, because the Dutch will then have a target to go after, if needed, a thumping win against Belgium to lock in any and all tie-breakers they need to win.

Serbia has been playing very well, but they’ve run into a challenging group at the end. They play the defending Olympic champions China in Hong Kong, Japan, and Russia. China has played well when they’ve chosen to, and might begin to really ramp up preparations for a guaranteed spot in the Final 6. Russia has underperformed, but still has the stars to make them a tough matchup. Japan has been playing as expected, but don’t match up well against the big, powerful Serbian team, so that might be their best chance at guaranteeing a spot in the final.

Even if both teams go winless, they can still advance with help.

There’s a big group of three 4-2 teams (four if you include China, which we don’t, because they’re guaranteed a spot) who will be jockeying for position. Ironically, the United States, Italy, and Japan are all in separate groups, which leaves the scenarios wide-open here.  The United States, with 13 points for their 4 wins, have a huge advantage over Italy and Japan. If the United States goes 2-1 in their final round, they’re in to the Final 6. One of those wins could be against winless Belgium on Saturday. They also play the Netherlands, who have a ton of momentum. The targeted swing game then will be Brazil, who have well underperformed expectations as the defending champions. That match will be a matter of which young, inexperienced team steps up in a big moment – they play the final day in a match that could be in a make-or-break for both sides. Thus far, Team USA would have to have the edge.

Japan is in a very precarious situation. They play in the most challenging final group of the 4-2 teams, and need the most help to advance to the Final 6. If they can’t find 2 wins against Serbia, China, and Russia, they’re in trouble. China not having anything to play for helps, but that’s still a bad position to be in for Japan.

This leaves the door open for…

The Dominicans and Brazil

Although currently in 8th place with a 3-3 record and 9 points, the Dominican is in a very good position. Their final group is Turkey, Thailand, and Italy. Thailand and Turkey have just one win each in this year’s World League so far. Italy has been playing well behind the rocket arm of the young Paola Ogechi Egonu. But they’ll have the easiest path to 2 wins of almost any team in the entirety of Group 1 on the final weekend. If those are full-point wins (3-0 or 3-1), they’re not guaranteed of anything, but will in a good position given what the Brazilians and Japanese face in their final groupings. If they can also pull off a win over Italy (which they’re certainly capable of) and go 3-0 on the final weekend, then they’ll be heading to China.

Brazil, as mentioned above, unless they stumble against the Netherlands, probably plays the United States for a spot in the Final 6 on the last day of pool play. That scenario could change rapidly after Friday’s results, but that’s the most likely scenario right now.

At the End of the Day

There are still too many scenarios to give many definitive answers about who will be in or who will be out. But, if we were in the business of prognosticating (and we are), the ‘chalk’ scenario would have these 6 teams in the Final 6:

Things will become a little more clear on Friday, but Saturday will be the big separation day.